My wife was lying in the back of an ambulance, dazed and bloody, while I sat in the front, distraught and distracted. We had been bicycling in a quiet neighborhood in southern Maine when she hit the handbrakes too hard and catapulted over the handlebars, turning our first day of vacation into a race to the nearest hospital.

The anxiety when a loved one is injured is compounded when you know just how risky making things better can get. As a long-time advocate for patient safety, my interest in the topic has always been passionate, but never personal. Now, as Susan was being rushed into the emergency room, I wanted to keep it that way. “Wife of patient safety expert is victim” was a headline I deeply hoped to avoid. 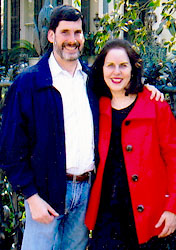 Michael Millenson and his wife, Susan (Photo provided by Millenson)

In the weeks after the accident, we spent time at a 50-bed hospital in Maine; a Boston teaching hospital where Susan was transferred with a small vertebra fracture at the base of her neck and broken bones in her left elbow and hand; and a large community hospital near our suburban Chicago home. There were plenty of opportunities for bad things to happen — but nothing did. As far as I could tell, we didn’t even experience any near misses.

What went right? After all, though our health care system knows how to prevent errors that kill 44,000 to 98,000 people in hospitals each year, that death toll has remained stubbornly constant. Based on personal and professional observations, I’d simplify the formula that kept Susan safe into three variables: consciousness, culture and cash.

Consciousness of patient safety sounds easy, but it isn’t. The harm caused patients is inadvertent and often occurs as part of complex interventions. As a result, a 2009 JAMA commentary pointedly noted, “clinicians have labeled virtually all harm as inevitable for decades.”

But today, the cloak of invisibility is being lifted. Twenty-six states require hospitals to report certain medical errors; Medicare and some private insurers won’t pay for problems caused by a growing list of quality and safety lapses, and the government has launched the $1 billion Partnership for Patients to dramatically reduce avoidable harm.

Just as importantly, patients are worried. In a poll by Consumers Union, 77 percent of respondents expressed high or moderate concern that they might be harmed by a hospital infection and 71 percent had the same concern about medication errors. Inevitably, more patients and their families are speaking up — as I most certainly did, albeit as politely as possible.

When the ER nurse at Maine’s York Hospital gave Susan morphine, I asked about the dosage and timing. When she was transferred to Massachusetts General Hospital in Boston, I asked each medical professional to identify themselves and what they were doing. Although it’s impossible to know if my questions had any positive impact, at a minimum they reinforced an existing safety consciousness.

Although consciousness of a problem can spur change, sustaining it requires a supportive culture. Can there be any more graphic expression of a safety culture commitment than Baylor Health Care System’s mission to eliminate preventable deaths, preventable injuries and preventable risk?  Or Ascension Health’s “healing without harm” initiative and its goal of reducing preventable deaths by 900 each year? (They’ve reached a minimum of 1,500 so far.) Both organizations have published results in the peer-reviewed literature.

Glenbrook Hospital in suburban Chicago — it’s part of the NorthShore University HealthSystem — isn’t quite as ambitious in its objectives. Still, its culture was obvious even before I peeked at the monthly infection report left sitting on a reception desk. When the orthopedic surgeon was explaining the procedure he would be doing, he talked about safety. The consulting neurosurgeon (due to Susan’s neck injury) talked about safety. The anesthesiologist talked about safety. Right before surgery, nurses fitted Susan with surgical stockings to prevent deep vein thrombosis — an evidence-based guideline followed by fewer than half of hospitals. When I challenged the surgical team on appropriate prophylactic antibiotic use, a nurse indignantly cited a study showing I was mistaken.

I backed off, happy they’d thought about the issue seriously. But I did feel emboldened to ask whether the team in the operating room took time-outs before surgery (the evidence shows it helps make sure everyone’s on the same page before you start cutting) and whether the team introduced themselves before proceeding (believe it or not, even the doctors may not be entirely certain who is behind those masks). Yes and yes, the answers came back.

Culture change at hospitals is easier these days with role models like Ascension and Baylor, and with safety checklists like the one developed by Johns Hopkins’ critical care specialist Peter Pronovost. But if consciousness is one barrier to culture change, another one of at least equal importance is cash.

There’s a link between financial stress and patient distress. A recent study in Health Affairs found the 178 “worst” hospitals in the United States care for more than twice the proportion of elderly minority and poor patients as the nation’s 122 “best” hospitals, where costs are lowest and quality highest. As one headline put it, “Bad Hospitals, Poor Patients.”

Money talks in other ways. I’ve written about how some hospitals implicitly see adverse events as a way to keep beds filled (although, of course, actual patient deaths thwart that goal). The hospitals where my wife was treated were all prosperous. Even without worrying about a reluctance to confront complications, would a cash-strapped York have transferred Susan to a tertiary care facility, or would they have assured a well-insured patient they could take care of her broken neck? Would a bottom line-driven Mass General or Glenbrook have angled for a longer hospital stay?

It’s tough enough to change culture. It’s even tougher if it you think you’ll lose money doing so. That’s why Medicare is increasingly linking payment to explicit quality and safety indicators.

We ask a great deal of physicians, nurses and other professionals. Those whom we encountered juggled multiple roles — healers attending to the ill and scared, prudent managers of health-care resources and team players in system improvement. For the skill and grace with which they performed all those roles we were deeply grateful. Thanks to them, Susan has now recovered to the point that to the casual observer there’s no obvious evidence of her multiple injuries.