There is a corner of the health care industry where rancor is rare, the chance to banish illness beckons just a few mouse clicks away and talk revolves around venture deals, not voluminous budget deficits.

Welcome to the realm of Internet-enabled health apps. Politicians and profit-seeking entrepreneurs alike enthuse about the benefits of “liberating data” – the catch-phrase of U.S. Chief Technology Officer Todd Park – to enable it to move from government databases to consumer-friendly uses. The potential for better information to promote better care is clear. The question that remains unanswered, however, is what role these consumer applications can play in prompting fundamental health system change. 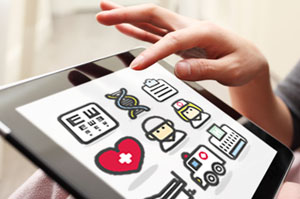 Michael W. Painter, a physician, attorney and senior program officer at the Robert Wood Johnson Foundation, is optimistic. “We think that by harnessing this data and getting it into the hands of developers, entrepreneurs, established businesses, consumers and academia, we will unleash tremendous creativity,” Painter said. “The result will be improved and more cost efficient care, more engaged patients and discoveries that can help drive the next generation of care.”

The foundation is backing up that belief with an open checkbook. RWJF recently awarded $100,000 to Symcat, a multi-functional symptom checker for web and mobile platforms. Developed by two Johns Hopkins University medical students, the app determines a possible diagnosis far more precisely than is possible by just typing in symptoms as a list of words to be searched by “Dr. Google.” Symcat also links to quality information on different providers and can even direct users to nearby emergency care and provide an estimate of the cost.

Symcat received its check in early June at the Health Data Initiative Forum, an event where the  upbeat tone was reflected in its official nickname, Datapalooza. Sponsored by the Department of Health and Human Services and the Institute of Medicine, the first such meeting in 2010 fit into a cozy auditorium. This year’s gathering drew nearly 1,500 attendees to the Washington Convention Center to discuss how consumer-friendly data could disrupt old ways of delivering health care information.

The federal government plays multiple roles in that effort as convener, innovator, cheerleader and facilitator, the latter through an aggressive program to open up data to the private sector. Symcat, for instance, draws on disease prevalence data from the Centers for Disease Control and Prevention. Other presenters and exhibitors showed off new efforts to apply these federal resources to help anticipate asthma attacks, make diabetes care more effective and improve survival estimates in cancer patents.

The intense interest in consumer health IT comes in response to “an increasingly health care ‘do-it-yourself’ world,” notes economist Jane Sarasohn-Kahn. From a third to a little under half of U.S. adults now use health-related blogs, social networks, ratings websites or apps. Health and medical apps for the iPhone now target fitness, stress, chronic disease, mental health, smoking cessation and medication adherence, to name just some categories tracked by MobiHealthNews.

Funding has followed the crowd, with investments in health information apps up a reported 78 percent in just two years to $766 million, and the average start-up pulling in nearly $12 million. The medical app market, already growing faster than the general apps, will grow 25 percent annually over the next five years, according to one research firm’s estimate.

Despite the buoyant marketplace, it remains to be seen whether the effectiveness of individual apps will match the enthusiasm. While MobiHealthNews counted nearly 14,000 health- and medical-related iPhone apps as of April, the reliability of any particular app or even category of apps is hard to determine. One research group recently recommended that both content and user interface be tailored as necessary to respond to cultural differences among different racial and ethnic groups. Separately, another group of researchers examining web-based tools to help consumers control their diabetes concluded earlier this year that “few tools … met our criteria for effectiveness, usefulness, sustainability and usability.”

That uncertainty shadowing this fast-evolving field is one reason the Food and Drug Administration wants to regulate medical apps it believes could present a risk to patients if they don’t work as intended. That sentiment prompted a backlash among those fearful that bureaucratic caution would block innovation. In mid-July, President Obama signed bipartisan legislation that, among other provisions, calls on HHS to report to Congress on an “appropriate, risk-based regulatory framework pertaining to health information technology, including mobile medical applications.” FDA is expected to release guidelines reflecting its thinking by year-end.

Opening up new information sources to patients will also affect the traditional doctor-patient relationship. There is growing activism by some patients who don’t want to wait to become full, engaged partners in their care. For instance, Hugh Campos, who has long-standing heart problems, received national attention for demanding access to the data feed from his pacemaker. At the same time, some physicians wonder whether this level of involvement truly represents a trend. In a recent National Public Radio interview, Dr. Arnold Relman, former editor of the New England Journal of Medicine, said he had “some reservations about the depiction of a future patient who is consumed by constantly watching [remote] sensors talk to his smartphone. I don’t think that patients are going to be motivated to do that all the time.”

A recent survey found that about one in 5 mobile phone users search for health information. And experts caution that lasting behavior change is often blocked by barriers as much psychological as informational. An app whose interface is appealing isn’t the same as one that’s effective.

Jessie Gruman, a four-time cancer survivor who heads the Center for Advancing Health, points out that “keeping ourselves alive and out of pain is a serious business.” Those who are sick don’t need apps that are fun, says Gruman. Rather, “we want a technology that is efficient and useful –one that will help us take care of ourselves so that we can live lives that are fun.”