Minnesota Republicans are in a tough spot.

On one hand, they don’t want to do anything to show support for the federal health care overhaul that they call “Obamacare.”  On the other hand, the concept of an exchange — an online marketplace where consumers will be able to comparison shop for health insurance — is an idea they’ve embraced in the past. Gov. Tim Pawlenty proposed one for Minnesota long before Congress passed the federal health care law in March 2010. 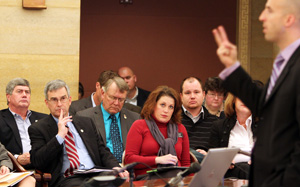 In addition to this tension within the party, the lawmakers face a time crunch. If Minnesota can’t show that it can operate an exchange by early 2013, the federal government will create and operate one for Minnesotans — anathema to Republicans who fervently oppose federal intervention in local health care markets.

As a result, state Republican lawmakers are split on how to respond to the exchange requirement. The party sponsored a forum recently, designed to explore the best policy alternatives.

Michael Cannon of the libertarian Cato Institute told the caucus that they should “strike a blow against the law” by vigorously opposing an exchange in Minnesota–otherwise they’re lending legitimacy to the Obama administration’s health law.

“You are saying we’re going to be part of this process, this law even if we think it’s harmful or even unconstitutional,” said Cannon. “And you’re going to be creating an agency that owes its existence and whose employees owe their power and paychecks to Obamacare.”

Another speaker, Don Garlitz, said there’s another way–Minnesota should consider Utah’s approach, where Garlitz said GOP-dominance is “extreme.”  Garlitz leads bswift, a Chicago-based benefits administrator that runs the Utah Health Insurance Exchange.  That exchange is one of two operating in the United States.  The other, in Massachusetts, provided a model for the federal health care law and a target for conservative critics. The Utah exchange is much smaller in scope and available only to small businesses, not individual consumers.

Garlitz told lawmakers they can pursue an exchange in Minnesota without being complicit with the Affordable Care Act.

“What would you do if there was no ACA? Pretend it’s not there today.  Would it make sense to do something like this?” Garlitz questioned.  “Maybe, maybe not. That’s your call. But if it does make sense, don’t let the ACA stop you from doing what you would’ve otherwise done anyway.”

In Minnesota, the stakes for Republicans are high. Under federal law, the state will have an exchange–either one of its own design or, failing that, one imposed by the federal government. As a result, GOP efforts to stymie what they consider a bad law could result in the federal government running Minnesota’s exchange.  At the forum, state Sen. David Hann, a key critic of the health law, said it’s important for the GOP-controlled legislature not to stand on the sidelines while the administration of Democratic Gov. Mark Dayton moves ahead with spending up to $28 million in federal funding to design an exchange.

Hann, chair of the senate health and human services committee, said Republicans shouldn’t be passive: “It is incumbent on us as legislators to say ‘What is the reform that ordinary consumers, people that are in business, people in insurance — what is the reform that’s going to meet those peoples’ needs in Minnesota?'”

State Rep. Steve Gottwalt, who chairs the house health and human services reform committee, said that Republicans need to come up with their own kind of exchange.

“An exchange as a model is innocent,” Gottwalt argued. “Don’t slam it because Obamacare adopted it…So is it possible that we could create an exchange that would enhance consumer choice and a private marketplace and not be a government command-and-control avenue?  I think that is possible.”

Whether Republicans can agree on a strategy and what it might look like, will likely be the subject of many meetings and debates ahead.