The 2012 Mississippi legislature is considering nearly two dozen bills and constitutional amendments all aimed at limiting abortion in a state that already has one of the lowest abortion rates in the country and just one abortion clinic.

Emboldened by the first Republican majorities in both chambers of the legislature since Reconstruction, anti-abortion advocates see a chance to limit abortion further and possibly ban it in Mississippi. 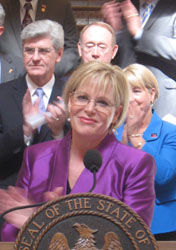 “Women need our support to choose life,” Herring told the crowd of activists and lawmakers, including Gov. Phil Bryant and Speaker of the House Philip Gunn.

“We are here about life,” Bryant said. “Now if any lives are threatened we should come forward. But those that are least among us, the child that cries out when no one hears, what we simply say is that we want Mississippi to be abortion free.”

Bills have been introduced that would require doctors to do ultrasounds or look for a fetal heart beat before an abortion and offer the woman a chance to see the results. Neither is currently required under Mississippi law.

Senator Chris McDaniel, R-Laurel, authored the heartbeat legislation and says women would have to sign a waiver before the abortion can be performed.

“Because science has demonstrated to us that once a discernible heartbeat is heard that the chances of that child growing to term are outstanding,” McDaniel said.

Currently in Mississippi both parents must consent before a minor can have an abortion. A bill introduced in both chambers would require that the consent be notarized.

Another bill in the House would prohibit abortions after 20 weeks of gestation, which some claim is the time at which the fetus can feel pain.

Several bills in the legislature would place new rules on Mississippi’s one abortion clinic, located in Jackson. Those changes would include allowing only state licensed OB-GYNs to perform abortions, requiring that doctor to have admitting privileges at a local hospital and requiring the facility to carry malpractice insurance. Doctors currently fly in from out of state to perform the procedure.

Herring has also called for the closure of the building itself, calling it a blight on the city because the windows are covered in black plastic. This is due in part to protect patient privacy from the protesters that frequently demonstrate outside the building.

In a vote that gained national attention last fall, Mississippians rejected a constitutional amendment that would legally define a person as beginning at conception. Fifty-eight percent of Mississippi voters cast votes against the amendment, sometimes called the “personhood amendment.”

Several constitutional amendments similar to the personhood amendment have been introduced in the state legislature. The goal of the amendments according to their authors is to change the constitution to ban abortions.

But Democratic Rep. Steve Holland of Plantersville says there is no reason the legislature should revisit the personhood debate.

“In a public referendum available to all, almost 60 percent of voters said not ‘no’, but ‘hell no’ on that. And it is absolutely ludicrous that we would even mention that in the halls of the capitol this year,” Holland said.

Gipson, though, says his new version of the personhood amendment would address problems with the first draft such as the legality of some forms of contraception and in-vitro fertilization.

Mississippi residents would have to give any constitutional amendment an up or down vote at the polls this fall if any of the proposals pass the state legislature.