When Janie Guice looks at the Mississippi Delta she sees a vast, flat flood plain, home to cotton fields and catfish farms, but she also sees desperate rural health problems and a deep shortage of doctors to deliver primary care to the region’s residents. 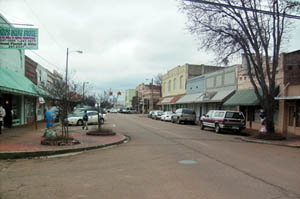 The town of Belzoni, Miss., has just four doctors serving all of Humphreys County and surrounding areas. (Photo by J. Stephen Conn via Flickr)

Guice is the recruiter for the University of Mississippi’s Rural Physician Scholarship Program, headquartered at the state’s only academic medical center in the capital of Jackson. The state-funded program offers students a $30,000 scholarship that covers all the expenses of medical school, if they agree to go back into practice in a rural area for four years after they graduate. But there is a catch: Students must originally come from a small rural town far from health care providers.

The success of the four-year-old program, she says, depends largely on her ability to pick the right students.

“Basically I am looking for one of two personalities,” says Guice (rhymes with nice.) “Either the maverick who is going to go to med school, and go back home and fix what is wrong with the health care delivery system. Or the missionary, the student who says to me ‘I thought about going to seminary but I’ve always wanted to be a doctor.’ To which I say, ‘Have I got a mission for you. It’s called Mississippi!'”

Guice believes students from small towns are more likely to put down roots and continue practicing in a rural setting after their mandatory four years is up. She knows it is a tough sell.

“Who is the one that is going to go back and live in a community that maybe doesn’t even have a Walmart?” says Guice. “And yes, there are a lot of communities in Mississippi that don’t have a Walmart yet.”

But Guice’s pitch appealed to John Russell McPherson, 26, who had already been admitted to med school when he heard about the program in an email.

McPherson, who is in his fourth year of medical school, is from the Delta town of Inverness, population 1,000. He describes why he plans to return to the area and what he loved about growing up there.

“Dirt roads. No traffic. Hunting. Outdoor stuff. That is what I am about and that is what I want to get back to,” McPherson says. “Work is going to be work and you are going to make a good living doing this, but it is really about being close to the family and hobbies that you enjoy.”

There are 17 doctors for every 10,000 residents in Mississippi but in many areas the ratio is far lower. The town of Belzoni, for instance, has just four doctors serving all of Humphreys County and surrounding areas.

Belzoni is the self-professed “catfish capital of the world,” and giant, colorfully painted stone catfish statues line the streets.

In the Belzoni town square is a squat white concrete building that houses the Gorton Rural Health Clinic, where the father-son team of Drs. Mack and Carlton Gorton practice.

Mack Gorton just turned 70, and has been running the clinic for 40 years.

“My daddy had a drug store here. This is my home town and they needed a doctor,” the elder Dr. Gorton says, explaining why he decided to practice in his hometown.

“It is a challenge to get people to come to the Delta to practice. So, I think it is usually somebody who has to be here who has a love for people and love for what you are going to be treating here,” the younger Gorton says. “To me, I can’t imagine [practicing] anywhere else.”

It’s this hand-off of clinics and patients across generations of doctors that the rural physician program is attempting to recreate.

The goal is especially important in rural areas of Mississippi where obesity and diabetes are the norm and life expectancy can be up to 10 years shorter than the national average. At least one Delta county has no doctor at all.

Guice says the doctors that leave her program for these areas will help provide better treatment, and play another role as well: generating as much as $2 million a year in economic impact in a town.

“I see these young physicians as pebbles in the economic pond of Mississippi because of that ripple effect. Not to mention improving the daily lives of Mississippi folks,” Guice says.

The first of Guice’s rural scholars will be leaving residency to begin practice later this year with more than 40 more aspiring doctors currently in the pipeline.

And the program appears to be growing in popularity: This year there were more than 70 applicants for just 18 slots.

Clarification: An earlier version of this story referred to the University of Mississippi medical school in Jackson as the only one in the state. There is a new school of osteopathic medicine in Mississippi, which expects to graduate its first Doctors of Osteopathy in 2015. The William Carey University College of Osteopathic Medicine in Hattiesburg opened in 2008 and received provisional accreditation in 2009.

This story is part of a reporting partnership that includes Mississippi Public Broadcasting, Kaiser Health News and NPR.