JACKSON, Miss. — Gov. Phil Bryant and Insurance Commissioner Mike Chaney have known each other for 30 years and call themselves friends.

Now, though, a wedge has come between the two elected Republicans — President Barack Obama’s health law. 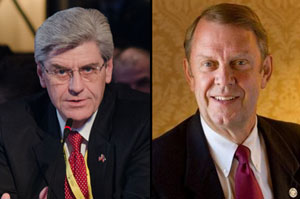 Bryant is trying to stop Chaney from creating a critical feature of the Affordable Care Act — an online health insurance marketplace that will allow  an estimated 250,000 Mississippi residents to shop for coverage and find out if they qualify for government subsidies or Medicaid, the state-federal health program for the poor.

Their dispute, in a state whose population is among the nation’s poorest and least healthy, is an example of a growing split among Republicans over whether to continue resisting the controversial law. Two months ago, Republican opposition was nearly uniform across the country.  But cracks are appearing and they will widen, predicts Larry Jacobs, director of the Center for the Study of Politics and Governance at the University of Minnesota. “The arc of partisan fever is beginning to recede and pragmatism is beginning to come to the fore,” he says.

Arizona Gov. Jan Brewer, one of the law’s most vocal opponents, shocked the GOP-controlled legislature on Jan. 14 when she backed the health law’s optional Medicaid expansion. Brewer became the fourth Republican governor and 23rd overall to embrace extending Medicaid to cover residents earning up to 138 percent of the federal poverty level ($32,000 for a family of four). The other GOP states to sign on are Nevada, New Mexico and North Dakota.

Most states are expected to decide on expanding the program by late spring.  As many as 17 million people would become eligible for Medicaid if all states participate.

Mississippi was one of four Republican states and 17 overall (plus the District of Columbia) that applied to the federal government in December to establish a state insurance marketplace, or exchange.  The other GOP states were Utah, Idaho and Nevada. States that don’t set up an exchange will have one created by the federal government.

But because of Gov. Bryant’s opposition, Mississippi is the only state in that group that is still waiting for conditional approval. The federal Health and Human Services Department has delayed its decision until later this month, hoping the two men can work things out. That’s unlikely based on their comments.

Bryant, sitting in his office in the Capitol where he keeps the Ten Commandments on a pedestal near his desk, says he despises the federal law because he believes it will drive up costs and impinge on individual liberty.

He fears the exchange will drive too many people onto Medicaid, including those that are eligible now but not enrolled.

He also opposes expanding Medicaid, though some Republican lawmakers are more open to the idea because the federal government would pay the costs for the first three years and not less than 90 percent thereafter.

“This is a bait and switch,” Bryant says, asserting that states will get stuck with higher costs. 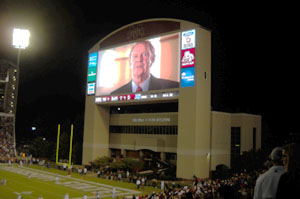 Regardless of whether the state or the federal government runs the exchange, people who qualify for the program will be directed to Medicaid. This will occur in all states, even those that don’t expand Medicaid eligibility under the law.

Chaney, too, had opposed the health law, but now he says having the state run the exchange is the best way to make sure it’s designed for the needs of Mississippi residents — a viewpoint privately shared by many lawmakers and interest groups in Jackson.

“I have known the governor for many years,” Chaney says from his office overlooking the Capitol. “The governor and I are friends, and reasonable people can disagree and still be friends. But I think on this issue a state-based exchange is the right thing to do.”

Chaney and Bryant first met in the early 1980s when they were in the Jaycees, a service group for young adults. Later, they served in the state House together and both have held elected and appointed positions ever since.

Chaney notes Bryant endorsed an insurance exchange while he was lieutenant governor in 2009, when then-Gov. Haley Barbour sought to create one even before the health law passed.  Bryant says he favored an exchange that had no government subsidies or links to Medicaid.

On Friday, the insurance commissioner got a boost when state Attorney General Jim Hood, a Democrat, issued an advisory opinion declaring that Chaney has the legal authority to pursue a state exchange, citing a law change approved by state lawmakers in 2009. Bryant says the decision was expected because Hood is a Democrat and that it would not change his opposition.

Using millions of dollars in federal planning grants, Chaney has put Mississippi out front nationwide in developing the marketplace named “One, Mississippi.”

An early version of the website is operational and a marketing campaign has begun with billboards and videos at Ole Miss football games.

Bryant worries about setting up a huge bureaucracy with dozens of new state employees. But so far all the work is being outsourced and there are no plans to use state money to operate it.

“Not a penny of state funding will flow through here,” under current plans, says Lanny Craft, executive director of the state’s high risk insurance pool, an independent nonprofit created by the state, which houses the exchange. After federal start-up grants run out in 2014, the administrative costs will likely be covered by a fee paid by insurance companies selling policies in the exchange.

On a recent day, company workers met to discuss the tasks ahead, including contacting customers whose credit cards expire before their next monthly insurance payment is due.  The computer programming and other website development has continued even though the marketplace’s future is unclear, pending a decision by HHS.

If the federal government backs the state exchange, Bryant hasn’t ruled out taking other steps to impede its operation. For example, the governor controls a state board that must approve state contracts, such as those needed to outsource work for the exchange.

Asked if would also try to block a federal-run marketplace, he says: “Certainly I will.”