Mississippi, a deeply red Southern state that is part of the Supreme Court case against the health law, is moving full speed ahead with one of the key provisions of that law: an online health insurance exchange. 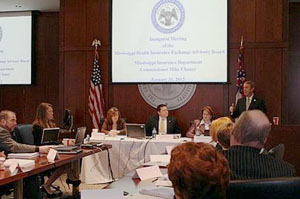 Officials, including Mississippi Commissioner of Insurance Mike Chaney, meet for the inaugural meeting of the Mississippi Health Insurance Exchange Advisory Board in late January (Photo by Mississippi Insurance Department).

Unlike Louisiana, Alabama, Florida and other southern conservative states, Mississippi is well on its way to having an insurance exchange ready for operation by the 2014 deadline laid out by the health overhaul law.

“There are portions in that act that are good parts. And that part happens to be the exchange,” says Mississippi Insurance Commissioner Mike Chaney, a Republican in his second term. “It’s not a Republican idea. It is not a Democratic idea. It is a universal idea, and it has been around a long time.”

Efforts to set up an insurance exchange in Mississippi stretch back to before the Affordable Care Act passed, and an exchange had the outright support of former Mississippi Gov. Haley Barbour (who later attached the state to the case against the federal health law).

Republican Senator Buck Clarke, from the small delta town of Hollandale, described the political path of the Mississippi exchange, as two different bills failed in last year’s legislative session:  “The legislature couldn’t come together. The whole thing died. And the insurance commissioner saw a different route to this to get this going. And it is just trying to comply with federal law that is on the books right now.”

Chaney used a little-known rule, written by Clarke and passed into law in 2009, to lay the groundwork for the exchange.

Chaney says Mississippi may appear to be an anomaly in the South but he points out that other states did not have the same legal options to avoid a political fight.

That statute is part of the state law governing Mississippi’s high risk pool, which helps people with pre-existing conditions get insurance.  Lanny Craft, the executive director of the high risk pool quoted the rule allowing the pool to “serve as a mechanism to provide health and accident insurance to citizens of this state under any state or federal program designed to help a person obtain or maintain coverage.”

A January study by the Center for Mississippi Health Policy showed that Mississippi has a lot to gain if an exchange functions in the state as the health law projects. The study found a working exchange could help lower the rate of people in the state without insurance from 20-percent to 7-percent.

The center’s executive director Therese Hanna says that translates into 275,000 Mississippians who don’t have insurance getting it. The exchanges are also a key mechanism to deliver the federal money that the health law provides to subsidize health insurance for Americans at certain income levels.

“About 229,000 [Mississippians] would be eligible for subsidies,” Hanna says. “We are looking at approximately $900 million coming to the state because of that.”

Even if the Supreme Court strikes down all or part of the federal health law, it is likely that Mississippi and the handful of other states that have begun to convene their exchange planning boards will continue to build their exchanges.

But for the whole law to survive, the Supreme Court will have to uphold it over objections like this one from exchange proponent Haley Barbour: “I do not believe the United States government has the right, the authority or power to force us to purchase health insurance any more than in the name of home land security they could force every American to have to buy a gun.”

Mississippi Builds Insurance Exchange, Even As It Fights Health Law