Medicaid and controversy are welded together in many states lately, but for the most part, the wrangling is about “new” Medicaid — the Obamacare expansion of the health program for the poor and disabled. Mississippi, though, is raising the stakes. 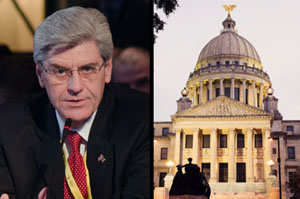 Democrats and Republicans in the state are in a game of political chicken that could threaten the very existence of the entire Medicaid program by the end of the month.

More than 700,000 Mississippians get Medicaid, with the federal government paying about three-quarters of the cost, and the state picking up the rest of the tab. The Affordable Care Act calls for expanding Medicaid to roughly 300,000 more low income Mississippians. But initially, the federal government would pay the entire bill, and after a few years, the state would finance 10 percent.

When the U.S. Supreme Court made the expansion of Medicaid optional for states last year, Republicans in Mississippi, led by Gov. Phil Bryant, adamantly refused to expand.

‘I do not believe that the federal government has the revenue to fully fund Medicaid across the United States of America,” Bryant said. “I am not going to fall into this trap and leave the taxpayers of Mississippi holding the bill.”

Democrats pushed back and made Medicaid expansion a legislative priority.

“What it boils down to in the end is that we are going to make sure that all Mississippians regardless of race can get the health care they deserve and that the federal government now says can be afforded to them,” said Sen. Kenny Wayne Jones, who chairs the legislative black caucus, one of the most vocal pro-expansion groups.

Democrats are in the minority in Mississippi’s House and Senate and to pressure the Republicans to at least debate expansion, Democrats refused to vote on renewing Medicaid. Without a reauthorization vote by the legislature, Medicaid in Mississippi expires July 1. The legislature adjourned its regular session in April.

Republican House Speaker Philip Gunn did not allow a debate because he sees it as a waste of time. He and other Republicans are furious about the Democrats’ tactics.

But Democrats say the reality is that about one in five Mississippians is on Medicaid, and Democratic Rep. Steve Holland says that is a huge issue for patients and providers.

“If Medicaid went away in the state of Mississippi, the only people that would survive medically are the freaking plastic surgeons. Every other Medical function would go to hell in hand basket,” said Holland.

This is not the first time that Medicaid has been a political football in Mississippi. For all the heated debate, Republican Sen. Terry Burton says his colleagues on both sides of the aisle admit Medicaid will most likely be renewed. But sometimes it comes down to the 11th hour.

It is widely expected that the governor will call lawmakers back next week for a special session. Democrats, despite their insistence that Medicaid expansion must happen in Mississippi say all they really want is a debate and an up or down vote. It’s something that has not happened yet, says Democratic minority leader Bobby Moak.

“[It’s the] same thing that legislatures all over the United States are debating right now in their chambers,” says Moak. “We have not had an opportunity to debate that. Yes, we need to come back and we need to debate that issue.”

Still, there is a chance that lawmakers won’t be called back or that they won’t agree.

In that case, the governor says he will run Medicaid by executive order without any legislative action. But it is unclear if that is legal.

This piece is part of a collaboration that includes NPR, Mississippi Public Broadcasting, and Kaiser Health News.