Missouri Gov. Jay Nixon on Wednesday said he was willing to work with Republicans on a plan to expand the state’s Medicaid program and even offered endorsements for conservative ideas that have drawn reproach from some health advocates.

Speaking at a career center in Springfield, Mo., the Democratic governor said he would support a proposal to require Medicaid recipients to work or pay more for their government-funded health insurance if it meant more people could enroll in the program.

Similar ideas have been floated by Republican governors in other states and even by some GOP lawmakers in Missouri. It’s currently part of a plan under consideration in Florida that would expand Medicaid there.

A work requirement is controversial among health insurance advocates who say it creates a barrier to care and deviates from the goals of the Medicaid program. But it’s been embraced by governors looking to instill changes in Medicaid in exchange for adding more people to the program.

Nixon has supported Medicaid expansion each of the last few years and has previously indicated he would agree to certain changes as long as eligibility was expanded to include 300,000 more adults.

But Wednesday’s remarks were the first time the Democratic governor embraced a work requirement.

“Anyone who refuses to work, or actively look for work, should have higher premiums; and if they don’t pay those premiums, they could lose their health care coverage,” Nixon said in prepared remarks.

Under Nixon’s plan, new and existing adult Medicaid recipients would be referred to a career center to help them find work. Those who refuse would need to pay more for medical care, through either higher copays or monthly premiums.

Recipients who don’t pay the higher rates and have incomes above the federal poverty threshold — about $20,000 for a family of three — would no longer be eligible for the program.

Nixon’s proposal did not include details on how much premiums and copayments would be. He did, however, say he also wanted to use federal Medicaid dollars to help small businesses pay for health care and indicated he would support some wellness incentives as part of a deal to add more individuals to the program. Such incentives, he said, include charging fees for improper emergency room use and bonuses for quitting smoking or losing weight. 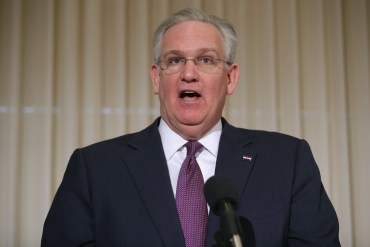 Despite being championed by prominent national Republicans, a work requirement has struggled to gain traction as part of a Medicaid expansion package in the Missouri Legislature. Nixon’s embrace of the idea didn’t appear to change that.

Sen. Ryan Silvey, R-Kansas City, who has supported Medicaid expansion said Wednesday that he hadn’t seen Nixon’s proposals but would like to meet with the governor’s staff to review them. Silvey said the concepts in the governor’s plan sound similar to a bill Silvey pushed last year. That bill never came to a vote.

“I had copays, I had workforce participation requirements in there,” Silvey said. “Hopefully the governor coming on board publicly with some of those things will help renew the conversation.”

But legislators who have fought the expansion said Nixon’s ideas do nothing to soften their opposition.

The requirement has also run into opposition from the federal government, which has yet to allow a state to include it as part of the Medicaid program.

Republican governors in Indiana and Pennsylvania sought a work requirement in their negotiations with federal health officials to expand their Medicaid programs. In the end, they settled for work referral programs that did not condition health coverage on jobs.

GOP governors in Utah and Tennessee have also sought a work requirement as part of plans to expand Medicaid coverage but have so far been rebuffed by their Republican legislatures.

Health insurance advocates have raised concerns that conditioning Medicaid benefits on work would be burdensome for some recipients. Thomas McAuliffe, director of health policy at the Missouri Foundation for Health, said that when it comes to Medicaid, states should focus on encouraging healthy behaviors instead of job requirements.

“Creating barriers to health coverage are not the way to effect savings from the system,” he said.

President Barack Obama’s federal health law gives states the option to use mostly federal dollars to expand their programs to cover adults with incomes up to 138 percent of the federal poverty line, or about $27,000 for a family of three. In Missouri, that would mean about 300,000 more adults would qualify for the program.

Medicaid is already one of the largest state expenditures, comprising about one-third of the state’s annual budget at a cost of roughly $8 billion per year.

A budget plan endorsed by the House on Tuesday does not include any funding for Medicaid expansion.

Jen Bersdale, executive director of the group Missouri Health Care For All, said it could help advance the debate now that Nixon has demonstrated he’s willing to adopt Republican ideas in order to expand the program.

“There’s no excuse for Missouri to continue sticking its head in the sand and not doing anything,” she said.

“I think it’s a step forward to begin having this conversation,” said Sidney Watson, a St. Louis University law professor.

Virginia Young of the Post-Dispatch contributed to this report.