OSAGE BEACH, Mo. — On a sun-kissed summer Saturday in this tourist town, one could almost imagine the pandemic didn’t happen. Dozens of people mingled, unmasked, outside the frozen custard stand. The putt-putt golf course and the go-kart track had plenty of customers, and the Grand Glaize Beach at Lake of the Ozarks State Park was crowded with visitors tossing footballs and digging their toes in the sand.

“Hardly anyone wears masks here,” observed Bob Harrison, visiting with his wife, Etta Harrison, from Olathe, Kansas, outside Kansas City. “People are sort of like, here, it’s a vacation resort, and they don’t have to worry about it.”

As summer approaches, tourist destinations from Cape Cod to Yellowstone National Park face looming questions over how to reopen tourism-dependent economies while balancing risks from the coronavirus. At the Lake of the Ozarks, a 54,000-acre reservoir thrust into the spotlight over Memorial Day party photos, the answer seems to be: We’re open for business.

Many residents and visitors at the lake remain relatively unperturbed about the virus and the national outrage over scenes of packed pool parties at Backwater Jacks and other Lake of the Ozarks bars over the holiday weekend. Even after reports surfaced recently that one pool party attendee tested positive for COVID-19 and potentially could have infected hundreds of others in the Midwest, some still look on the sunny side.

“It was a good thing,” said Larry Clark, who was selling coffee at a farmers market stand. “It showed we can open up. … It’s not something that should control our lives.”

His wife, Kat Clark, said people have been eager to get out of the house and don’t want to be told what they can’t do. “It’s just the nature of freedom lovers,” she said.

Just two stalls over, vendor Kathy Peironnet had another view of the infamous partiers. “I have a name for people who do things like that: covidiots,” said Peironnet, who wore a mask while selling art and jewelry at her booth. 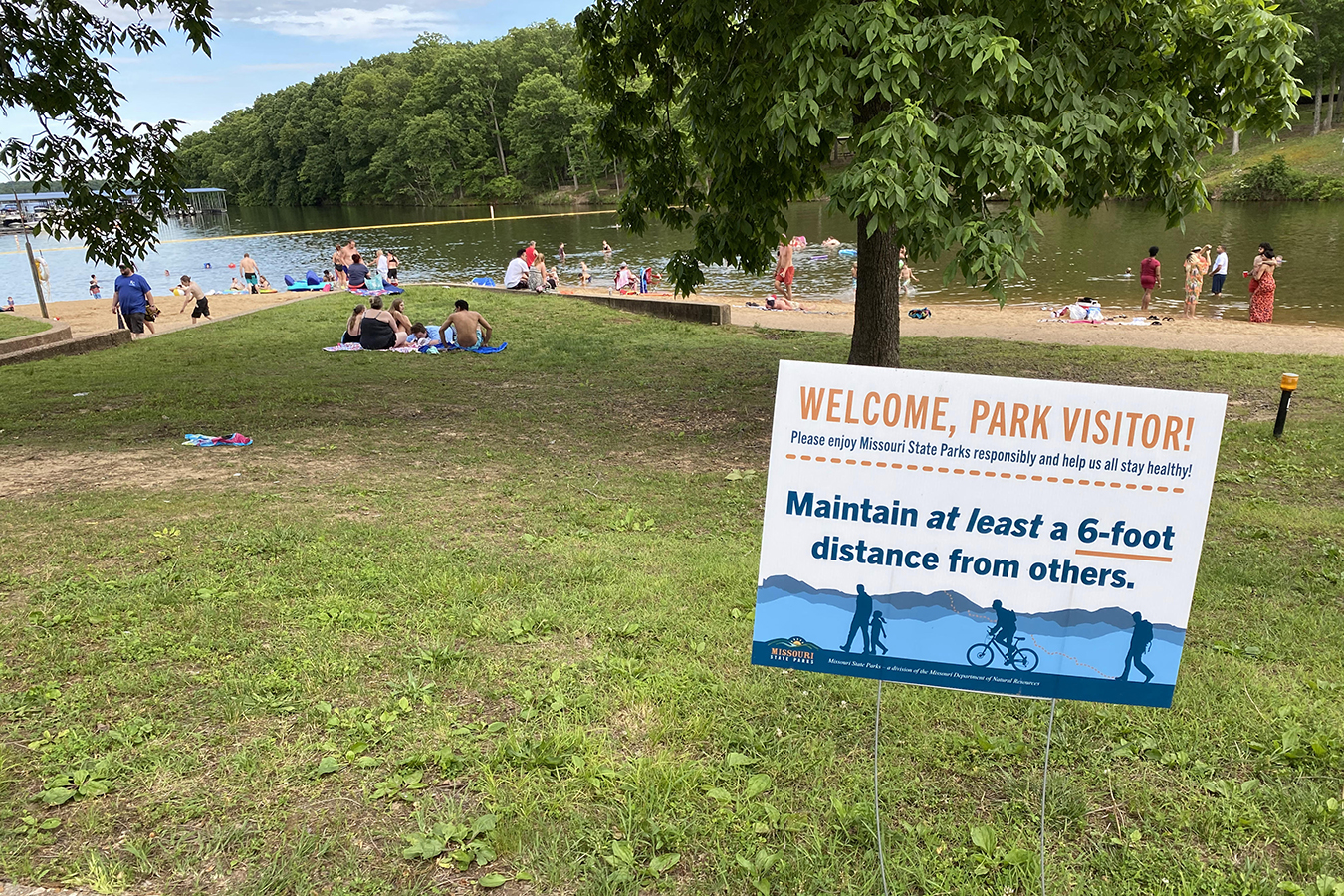 A sign instructs people to maintain a 6-foot distance from others while beachgoers lounge at Grand Glaize Beach in Missouri’s Lake of the Ozarks State Park on May 30. The popular resort area made headlines for a viral video showing Memorial Day partiers disregarding guidelines meant to curb COVID-19.(Sara Shipley Hiles for KHN)

Since Missouri’s stay-at-home order expired May 3, retail businesses of various sizes are allowed to reopen as long as they limit occupants to 10% or 25% of a building’s capacity. Restaurants must seat no more than 10 people at a table. At all times, the new order says, people should practice social distancing of at least 6 feet.

The Lake of the Ozarks region opened up cautiously at first. Camden County, Missouri, which houses much of the lake, has recorded 37 cases and one death from COVID-19 as of June 5, a rate of 80.76 per 100,000 people. For comparison, the city of St. Louis — where many lake visitors live — has a case rate more than seven times higher. But if out-of-towners did contract the coronavirus in Camden, they would take it, and their case counts, back to their home counties.

“In terms of total cases, the lake area has been very minimal,” said Nathan Bechtold, editor-in-chief of LakeExpo, a news outlet that covers the lake lifestyle. “By early to mid-May, it seemed like business was picking up. By the time we hit Memorial Day, I think everyone had a sense, economically speaking, we may be making up for lost time.”

Some out-of-towners who own area vacation homes came to the lake in March and April to ride out social isolation lockdowns. Then, as the holiday neared, demand skyrocketed as visitors from surrounding cities and states booked their getaways. Some boat dealers reported record-breaking sales. On Memorial Day weekend, the population of Camden County swelled from its typical 50,000 residents to hundreds of thousands of visitors, Bechtold estimated.

“There was pent-up demand regionally to get out, to get in the sunshine,” Bechtold said.

Russell Burdette, owner of Your Lake Vacation, a property management company, said his company sold out for the Memorial Day weekend for the first time ever.

Viral video showed customers crammed at local swim-up pool bars over the holiday weekend. Geospatial data analytics platform Tectonix published an analysis of anonymized cellphone data showing that customers at Backwater Jacks traveled to and from St. Louis, Kansas City, Omaha, Iowa, Illinois and other locations for the holiday weekend. St. Louis County issued a travel advisory and the Kansas state health department asked anyone who attended the crowded parties to self-quarantine for 14 days. In an interview on CNN, Dr. Anthony Fauci, director of the National Institute of Allergy and Infectious Diseases, called the party scene “tempting fate and asking for trouble.”

No covid concerns at the lake of the ozarks😳 #loto pic.twitter.com/Yrb4UNM64u

Late last month, the Camden County Health Department issued a press release saying a Boone County resident had tested positive for COVID-19 after being at the lake Memorial Day weekend. The person visited Backwater Jacks, Shady Gators, the Lazy Gators pool and Buffalo Wild Wings and “was likely incubating illness and possibly infectious at the time of the visit,” the statement said.

In response to the backlash, Backwater Jacks posted statements to Facebook saying that “no laws were broken” and “customers should have the freedom to choose” whether to visit. Hundreds posted supportive comments to social media.

But not everyone was a fan.

“I thought it was stupid,” said Etta Harrison, the woman visiting from Olathe, who is also a retired nurse. “But these are young people and they want to have fun.”

On that recent Saturday, she and her husband wore masks after eating lunch in the cafe at the local Dierbergs market, which had installed a hand-washing station outside.

Kathy Turner, an Osage Beach resident watching her daughter’s dance recital on an outdoor stage, said people make “bad choices” everywhere, but she wasn’t too worried about visitors bringing the virus to town.

Bechtold, the LakeExpo editor, said many people felt the national media sensationalized the story. He said lakeside pools might have held a few thousand people, but hundreds of thousands were at the lake, most of them acting responsibly. “The pictures of the pools,” he said, “were not a very fair and complete representation of what happened here last weekend.”

In the end, the negative Memorial Day party publicity will end up being positive for the lake, predicted Burdette, the vacation property manager. He envisions a busy summer as Midwesterners rethink faraway vacation plans and look for closer destinations where they can spend time outdoors — boating, fishing and grilling.

Burdette said he wouldn’t have gotten into the pool shown in the viral video. “On the other hand, we are a tourist community, and if people act responsibly, there are plenty of things to do here,” he said. “We have plenty of room for people to social distance.”

Fauci, in the CNN interview, cautioned against making quick conclusions. Some people are asymptomatic carriers, testing still isn’t widespread, and the virus takes time to incubate. A study published in March in the journal Annals of Internal Medicine said virtually all who develop symptoms of COVID-19 do so within 11.5 days.

Fauci said “people who were out there frolicking” should not be overconfident if cases don’t rise immediately. “The effect of spreading is not going to be seen for two, three or maybe even more weeks,” he said. “That’s the reason why we encourage people … to take a careful look at the guidelines and to the best extent possible, to follow them.”

At Lake Of The Ozarks, It’s (Almost) Business As Usual, Despite The Coronavirus