SAN DIEGO — Kerri De Nies received the news this spring from her son’s pediatrician: Her chubby-cheeked toddler had a rare brain disorder.

She’d never heard of the disease — adrenoleukodystrophy, or ALD — and she soon felt devastated and overwhelmed.

“I probably read everything you could possibly read online — every single website,” De Nies said as she cradled her son, Gregory Mac Phee. “It’s definitely hard to think about what could potentially happen. You think about the worst-case scenario.”

ALD is a brain disorder depicted in the 1992 movie “Lorenzo’s Oil,” about a couple whose son became debilitated by the disease. The most serious form of the illness typically strikes boys between ages 4 and 10. Most are diagnosed too late for treatment to be successful, and they often die before their 10th birthday.

The more De Nies learned about ALD, the more she realized how fortunate she and Gregory were to have discovered it so early. Her son’s blood was tested when he was about 10 months old.

California is one of only a handful of states nationwide that screens babies for the gene mutation that causes the disease — a test that dramatically increases Gregory’s chances of survival.

The state began testing newborns for ALD in September 2016, seven months after the federal government added it to the list of recommended screenings. The testing included all babies born after February of that year.

“If you pick it up in the early stages … you are at a much better place in terms of treating it effectively,” said Florian Eichler, a neurologist at Massachusetts General Hospital. “That’s where the newborn screening is so important. It really helps you detect these boys at risk.”

Eichler said he has seen many families whose boys were diagnosed late. “Listening to families and their ordeal gives you a real sense of what this has done over generations and how much suffering could be prevented through the screening program,” he said.

New York was the first to begin screening, in 2013, followed last year by Connecticut and California. A few other states, including Pennsylvania and Minnesota, have since followed.

“It’s mind-boggling that not every state is testing,” said De Nies, who teaches children’s ballet in San Diego. “Families will not know until it could be too late for them.”

Advocates, including several moms who lost their sons to the disease, were instrumental in getting the screening law passed in California. Now they are continuing to lobby legislators and pushing health officials to add ALD to screening panels across the nation.

Janis Sherwood said that since her son Sawyer’s death from ALD, she has felt an urgency to educate doctors, families and others about the disease. In the past few years, she turned her attention to newborn screening. She believes that as California collects data on how the boys do in treatment, other states will follow. “I think that we are going to see a domino effect as we get more states on board,” she said. 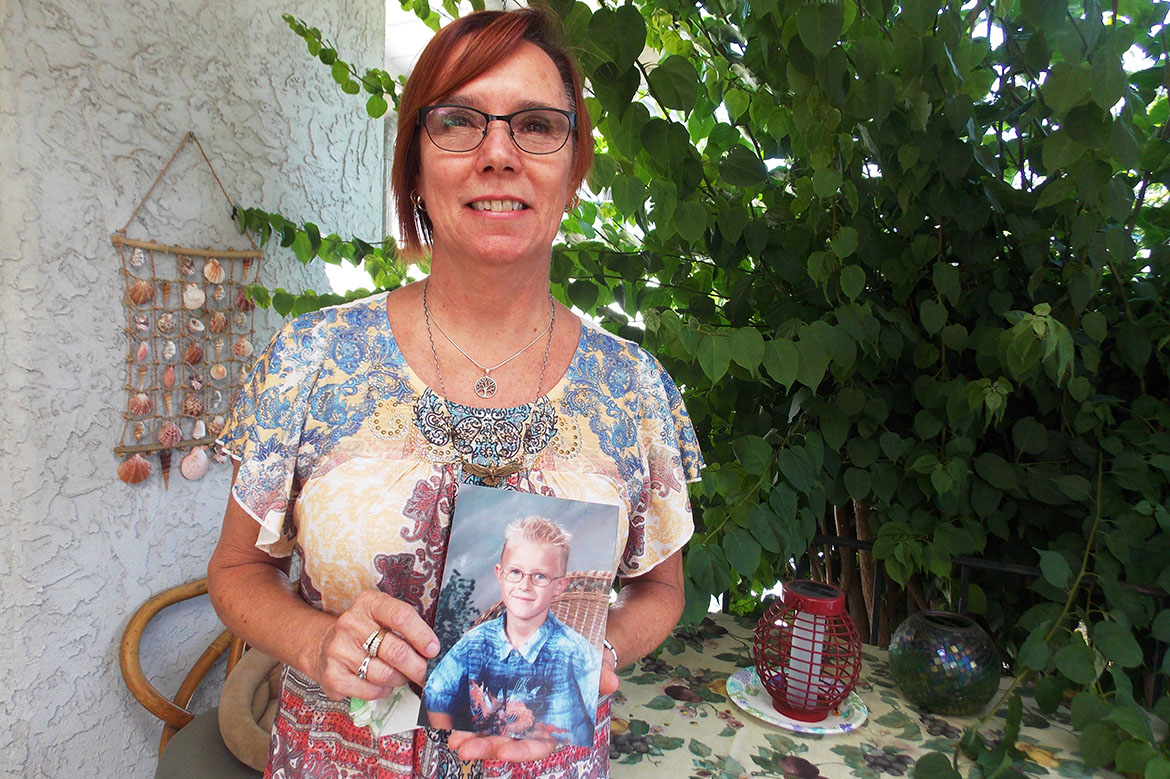 Janis Sherwood lost a son to ALD in 2003. She said she feels an urgency to educate doctors, families and others about the rare brain disorder. In the past few years, she has turned her attention to lobbying for newborns to get screened for the disease. (Anna Gorman/KHN)

About 1 in every 18,000 people have ALD. Of boys with the genetic defect, about 30 to 40 percent will develop the life-threatening form of the disease, which leads to vision, gait and memory problems — and eventually death. It destroys myelin, the protective surface that surrounds some nerve cells.

Technicians draw the blood of newborns in the hospital soon after they are born. In California, state law requires that the blood be tested for about 80 diseases, including cystic fibrosis, severe combined immunodeficiency and primary congenital hypothyroidism.

Around the nation, testing kits cost a hospital or birthing facility about $120, said Jeff Botkin, who heads the medical ethics division at the University of Utah. “This is an extraordinarily low cost for this number of tests,” he said in an email. The tests are typically covered by insurers or Medicaid.

Some conditions on the screening list are relatively common, but ALD is among the rare disorders the tests ferret out that can lead to serious health issues or even death if not detected and treated, Botkin said.

There is no answer to the question of how common a condition should be to merit spending health care dollars to test for it, Botkin said. But many of the conditions for which the federal government recommends screening are rare, which means they could affect 1 in 50,000 babies or fewer. “The major question is whether the condition is treatable,” Botkin said.

Both boys and girls get tested for ALD because they can both be carriers of the genetic defect and develop the less serious adult form of the disease. Only boys, however, develop the more serious, ultimately fatal, childhood disease. 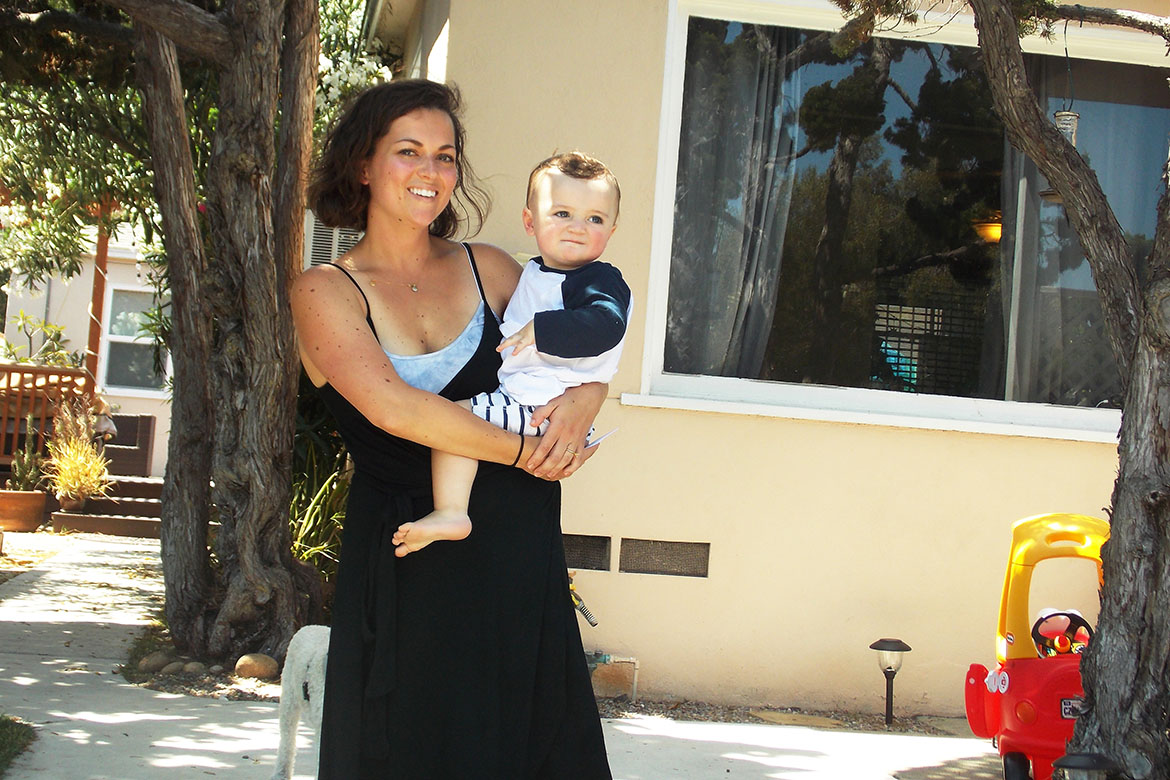 Kerri De Nies says she worries about Gregory but is confident he will live a long life. She gives credit to mothers who lost their sons to ALD and lobbied to get newborn screening approved. (Anna Gorman/KHN)

When doctors know that boys have the mutation, they perform brain MRIs beginning when the boys are toddlers. If an MRI starts to show telltale changes in the brain, doctors can intervene to halt the progression of the disease.

The common treatment, a bone marrow transplant, is risky and complicated, but it is often successful if the donor is a good match and the procedure is performed before the children have visible symptoms, UCLA neurologist Raman Sankar said. Doctors are also having some success with gene therapy, in which the children undergo a transplant with their own stem cells rather than a donor’s, Sankar said.

The earlier the transplant, the better a child’s chance of survival, he said. “The delay may make the difference between whether he can have a lifesaving treatment or not.”

Before newborn screening, boys in the early stages of ALD frequently were incorrectly diagnosed with hyperactivity and other conditions, said Richard Olney, who heads the genetic disease screening program for the California public health department. “Many families had to go through a sort of diagnostic odyssey,” he said. “It only became clear as they developed progressively worse problems that they had a serious genetic condition.”

By the time a brain MRI was performed, there was often too much damage to save the child. That’s part of the challenge for clinicians who may not be familiar with ALD: “How do you know when this is a critical brain disease versus just a normal part of development?” Eichler said.

Those with the genetic mutation who do not develop the disease in childhood may still have a milder form as adults. People with the mutation also need to be monitored by an endocrinologist, because many will suffer from a condition in which their adrenal glands fail to produce enough of a stress hormone that is needed to fight infections.

Gina Cousineau’s 8-year-old son, Evan, was diagnosed with ALD in May 2007 after he came home from swim practice and had a seizure. Though he underwent a bone marrow transplant, Evan died from a secondary infection before he turned 9.

Cousineau lives in the southern Orange County city of San Clemente and helped lobby for the California law that requires ALD screening. She said newborn testing benefits infants with ALD and can help families discover that siblings or other relatives have the gene mutation.

“Thank God this newborn screening came into effect,” Cousineau said. “Knowledge is power. Had I had the knowledge with my son, Evan, he would be alive today.”

De Nies said she worries about Gregory’s future, but she’s confident her son will live a long life. And she credits Cousineau and other mothers whose sons didn’t have the same chance.

“Without them, we would never know about the gene mutation,” she said. “I just feel like they are our fairy godmothers.”