POLSON, Mont. — The names of the big health insurance companies are familiar – Blue Cross, Aetna, United Healthcare. But what about CoOportunity Health, or Health Republic Insurance of New York?  These are among 23 new health insurance companies that started under the Affordable Care Act.  They’re all nonprofit, member-owned cooperatives, and the aim is to create more competition and drive prices down. 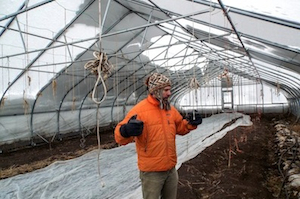 Karl Sutton is part of a food cooperative in Montana where he grows spinach. He understands the co-op model and thinks it can work for his health insurance company.

Funded almost entirely by federal government loans this year,  initial enrollment numbers look pretty good for a lot of co-ops, but that’s not necessarily enough to make them successful.

There are definitely people out there who are stoked about being able to buy their health insurance through a co-op. Karl Sutton is one of those people.

But in Sutton’s mobile greenhouse, it’s warm and there’s spinach growing. He sells vegetables to nearby markets in Missoula and Kalispell, but not these greens: “This is just spinach we over wintered. We’re just eating it ourselves.”

Sutton understands co-ops because he works in one:  a 10-year-old growers’ co-op, with more than $1 million a year in revenue. It’s run by and for its members, and Sutton wants that model for his health insurance company, too.

“When you buy into a co-op, that entitles you to one vote in the decision making, and I think it’s the one business model that actually aligns with our democracy,” he says.

Sutton was eager to sign up with the new Montana Health CO-OP. He thinks if members own the company, they won’t overuse health care, to save everyone money. He knows it’s an unproven start-up.

“There’s a degree of concern, but, well, we might as well try, because if we don’t have the membership then the health care co-op isn’t going to succeed,” he says. “We have to start somewhere, and I’m willing to take that risk”

A couple of hundred miles and several mountain ranges away John Morrison has a comfortable law office on Last Chance Gulch, a street in the heart of Montana’s capital city, Helena. Morrison was the first president of the National Alliance of State Health CO-OPs.

“In some states, co-ops are dominating the marketplace, with 80 percent of the enrollees going to the co-op,” he says.

That’s in Maine. Morrison says most co-ops are very happy with their enrollment numbers. Their rates are often the lowest available through an exchange.

“The co-op states have 8.4 percent lower premiums on average than the non-co-op states, across the marketplace,” says Morrison. “So co-ops are creating that competition. They’re keeping rates down in the states they’re operating in.”

But not everybody thinks that lower prices in some states are directly tied to whether a state has a co-op option. Bob Laszewski is an insurance industry consultant, and he says low prices in a company’s first year don’t mean much.

“We haven’t seen any claims yet. Getting the premium in the health insurance business is the first part of the business. Having enough premium to pay the claims over time is the real test,” he says.

The co-ops do have a financial cushion: federal start-up loans of about $100 million each. That gives them several years to re-adjust prices to cover all the health care their members will need.   It’s likely a  lot of their customers are people insurance companies avoided in the past – people who either couldn’t afford insurance before the new health law subsidies, or were turned down because they were sick, says Laszewski.

Jerry Dworak, head of Montana’s co-op, says there is enough margin in the new exchange market for the company to survive. He says he’s especially happy with the number of customers he’s been able to get in spite of healthcare.gov simply not working for the first two months it was open.

“Never in my wildest imagination, with the political capital that was involved in this thing did I think you’d hit healthcare.gov and it was blank! I never thought that was going to happen!” he laments.

“It’s grassroots,” he says.  “One thing about Montana, what really plays is what one Montanan says to another one in a coffee shop.”

Dworak is so optimistic, he’s planning to expand into Idaho next year. He knows it’s going to be tough to carve out a successful niche in a brand new and volatile market.