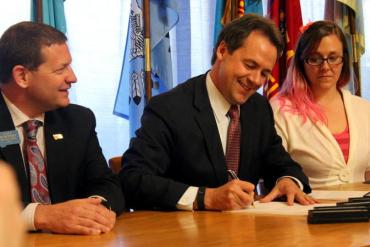 Earl Old Person, Chief of the Blackfeet tribe, sang a victory song on the capitol steps honoring the Governor and lawmakers who passed the Medicaid expansion bill.

Inside the capitol rotunda, a capacity crowd gathered for the signing ceremony and Bullock’s speech on the bill, known as the HELP Act.

“There truly may not be any more important piece of legislation this year than the Montana HELP Act,” Bullock said.

The HELP Act, sponsored by Great Falls Republican Senator Ed Buttrey, is a compromise than won support from moderate Republicans after a similar bill backed by Democrats was shot down.

“This is not Medicaid expansion,” Buttrey said. “We’ve accomplished so much more in creating a plan that truly focuses on a whole solution for Montanans.”

The bill offers new Medicaid recipients help finding work and help getting new job skills or education in addition to health benefits. That provision convinced enough Republicans to join all the legislature’s Democrats to vote for the bill.

Montana is now the 29th state plus the District of Columbia to expand Medicaid under the Affordable Care Act.

Montana’s plan, spelled out in the new law, now requires approval from federal Medicaid authorities before it can be enacted. There’s no firm timeline for that but federal authorities have approved modifications from other states in the past.