Michael T. McRaith, the Illinois director of insurance since 2005, was named last month by the Obama administration to become the country’s first director of the Federal Insurance Office, a post created through the Dodd-Frank financial reform act passed last year to protect against another financial meltdown.

McRaith was for many years an attorney in private practice, working at the intersection of financial services, insurance and consumer protection. He used his tenure with the state to beef up consumer safeguards in Illinois and to prepare the way for the health care overhaul. He will remain in his Illinois post until the end of the May. 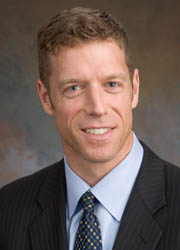 The new insurance office was established to advise the secretary of the Treasury on domestic and international insurance issues and consult with state insurance regulators. As director, McRaith will not be involved with health or long-term care insurance.

McRaith, 45, was interviewed by J. Duncan Moore Jr. in March, shortly before his appointment was announced. At the time, he declined to talk about speculation that he might be the nominee, saying only that “the creation of this office is a significant step forward for the country.” Here is an edited version of the interview.

We have seen in Illinois a shift occurring over 10 to 15 years. Some years ago, our health insurance market was two-and-a-half times more competitive than it is today. It was less concentrated in the top carriers, with more diffusion among private payers. These changes predate the Affordable Care Act [that overhauls the nation’s health care system]. It’s becoming more difficult for the state or regional health insurers to remain viable. This is occurring in every state.

What are the implications of increased market concentration?

Two things. First, as health insurers increase market share, their leverage over providers [including doctors and hospitals] increases. That increased leverage can lead to reduced reimbursements to the providers. That’s one source of conflict.

Second, as we move away from a fee-for-service model to what is known as the global payment arrangement [in which doctors are paid flat, per-patient rates], we can expect more emphasis on quality of care. We expect insurers will be incentivizing those providers who satisfy some objective measure of quality care.

Up until now, payers have made profits by excluding sick people. After 2014, under health reform, they can’t do that anymore. How does this change their business model? How will they add value?

The definition of success has to change. We have insurers operating in Illinois who have cumulatively collected more than $28 billion in surplus capital as of 2010. In this transition period to 2014, insurers are increasingly aggressive with their underwriting, meaning they are increasingly aggressive in denying coverage, limiting coverage or denying or limiting any one claim.

They are using the absence of rate regulation to price out existing policyholders. That is designed to lead to the accumulation of capital, so that by 2014, when insurers have to cover everyone, they’ll be starting from a point of extreme financial strength.

The new business model on the private payer side will have to be more lean. As a result we do think the responsible insurers will be emphasizing quality of care. They will attempt to shift some risk to providers and away from fee-for-service to the global payment arrangements.

Are you hearing anecdotal stories from consumers?

We sure are. People in the pre-Medicare age have a lot of trouble receiving individual and family coverage. Historically someone in that group would receive an offer of coverage with exclusions. Now we’re finding that person is not receiving an offer.

We’re also hearing from small employers whose premiums are increasing 30 percent to 40 percent. In one case a small business of personal trainers, where the average age was 31 – five of them in a high-deductible plan, and no one in the group met the high deductible – their premiums were increased by 35 percent.

Are the payers trying to get rid of these people? Or do they think they can really capture an increase this large?

The publicly traded insurance companies had profits in 2010 significantly higher than 2009.

In 2014, when pricing and denial can no longer be based on health status, the insurers are going to be successful based on the ability to market their products, and price the products accurately. That will be very different from today, when the prices don’t have to be connected to the actual risk of the individual.

Under the federal health law, insurers must spend at least 80 percent of their premium revenue on medical care. Is this realistic? Won’t insurers be able to game this?

The National Association of Insurance Commissioners has worked to develop a standard by which the 80 percent will be judged. It’s not ideologically driven. The numerator is payments by insurers for health care. The denominator is premiums paid to insurers, less taxes.

We expect most responsible companies will adhere to the standard.

The number, 80 percent, is high for many companies. For policies covering small employers and individuals, it is very difficult to satisfy. The larger insurance companies, the United Healthcares and Blue Crosses, can get to it more easily (because they have huge economies of scale). For large group policies, the threshold in the law is 85 percent. It’s much easier to hit a loss ratio of 85 percent if you are covering 5,000 to 10,000 people in the group.


Longer versions of this interview appeared in the