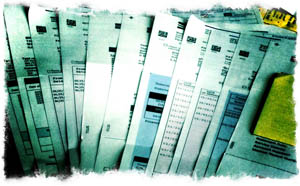 “The number of accounts that we’re seeing that relate to these high-deductible plans has been building, and it has been putting pressure on our bad debt levels,” Tenet Healthcare financial chief Daniel Cancelmi told stock analysts last week. “We’ve seen it building over the past several years, and it’s continued into 2013 as well.”

It’s not just Tenet, a for-profit chain with hospitals in California, Texas, Florida and elsewhere.

“We have definitely been hearing from members that they are seeing an increase in bad debt and even in charity care for people with high-deductible health plans,” said Caroline Steinberg, vice president for trends analysis at the American Hospital Association. “A lot of these folks tend to not understand the structure of their benefits until they get to the hospital, and they’re not covered as thoroughly as they thought.”

Also known as consumer-directed plans and often paired with tax-favored health savings accounts, insurance policies with family deductibles as high as $5,000 are increasingly offered even by large employers.

Nineteen percent of all employer-covered workers were enrolled in a high-deducible plan last year, more than double the rate of 2009, according to the Kaiser Family Foundation. (Kaiser Health News is an editorially independent program of the foundation.)

Proponents say the policies prompt consumers to pay more attention to health costs, to avoid needless care and to shop for the best deal. Skeptics wonder how patients can shop around when medical prices are unavailable and they might be in an ambulance on the way to the emergency room.

Hospitals supported the Affordable Care Act, which promised to increase coverage and reduce uncompensated care. But with high-deductible plans they’re seeing unpaid bills even for patients who are technically covered.

Typically about a quarter of hospitals’ uncollectible accounts have been associated with patients who have some kind of insurance, Steinberg said. She was unable to say whether that has changed in recent years.

However Stephen Mooney, head of a Tenet consulting subsidiary that helps hospitals manage revenue, told analysts that there has been “a continued uptick” in the balances patients owe after insurance is exhausted.

On the other hand, he said, health law subsidies taking effect next year for the uninsured to obtain coverage will work to hospitals’ advantage.

“So that’s a big thing, which we think is going to have an impact as it goes forward,” he said.