Texas and Florida, with their large uninsured populations, are not expected to offer coverage to many low-income patients. KHN’s Phil Galewitz and Mary Agnes Carey discuss:

KHN Senior Correspondent Phil Galewitz joins me now to talk about Medicaid and the health law.

PHIL GALEWITZ: Given the talks that have been going on and what we’re hearing from different states, we probably expect a handful more states, probably three or four more states, to come on next year. Some that are likely might be Utah, might be Indiana, might be South Dakota.

Some of the big states where we have a large majority of people who would get help from Medicaid expansion, namely Florida, namely Texas,  are not expected to expand. So we probably could get a few hundred thousand that might gain if those other states join.

MARY AGNES CAREY:   You’ve been talking to a lot of Medicaid directors all over the country. What are some of the big issues they’re concerned about for 2015?

PHIL GALEWITZ:  When the open enrollment begins, we’re expecting another surge of people find out that they may qualify for Medicaid. So Medicaid directors are worried about some people coming out of healthcare.gov, which is the federal exchange, and then how that is connected to the state Medicaid programs. There was an issue in the first year of open enrollment where the hand-off from the federal government to the states did not go smoothly. They think they got a lot of the fixes done, but they’re not really sure that’s all worked out yet. So that’s one big thing.

And then just handling the surge of enrollment, when people qualify for Medicaid. Getting them in and getting them started.

MARY AGNES CAREY:  What if you live in a state that doesn’t expand Medicaid and you are a low-income person, what happens to you?

PHIL GALEWITZ:  About four million people right now are in this “coverage gap,” where you don’t qualify for the subsidies on the exchange because you fall below 100 percent of federal poverty level. You fall below that, in a state such as Florida and Texas and Georgia and North Carolina that did not expand Medicaid, you’re out of luck for coverage under the Affordable Care Act.  And you’re basically left on your own, where you’ve been before. That means going to a community health center, that means struggling on your own to pay your medical bills.

Correction: This transcript and video have been updated to remove an incorrect income level for individuals at 100 percent of the federal poverty level.  The correct figure is $11,670. 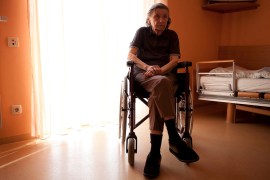 Should You Bring Mom Home From Assisted Living During The Pandemic?