While an unprecedented 6 million people have gained Medicaid coverage since September, mostly as a result of the Affordable Care Act, more than 1.7 million more are still waiting for their applications to be processed—with some stuck in limbo for as long as eight months, according to officials in 15 large states.

The scope of the problem varies widely. California, the most populous state to implement the health law’s expansion of Medicaid, accounts for a lion’s share of the backlog with 900,000 applications still pending as of early June. The next biggest pileup is in Illinois, with 283,000 cases, while New York has no backlog at all. 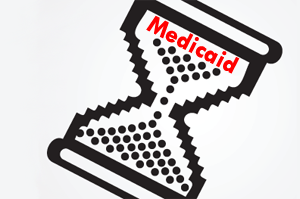 Yet even some big states that chose not to expand  the federal-state program for the poor, are seeing backlogs, including North Carolina with 170,000 applications pending, Georgia, with 100,000 and South Carolina with 62,000. Florida and Texas, which also did not expand the program, each report fewer than 11,000 in queues. Federal regulations typically require states to process applications within 45 days and many state applications are still within that period.

“It’s a serious problem that people are waiting a long time and the process of getting covered is more cumbersome than it should be,” said Stan Dorn, senior fellow with the nonpartisan Urban Institute.

Federal and state officials say the delays should not hamper people’s ability to get health care because Medicaid coverage can be extended retroactively for three months and people can seek emergency care at hospitals.

But Dorn said that some providers may refuse to see patients until they have confirmation they have insurance coverage. And without insurance, patients may not have cash to pay doctors who demand it upfront.

“You will have impaired access to care … because often the provider will not see you if you do not have a Medicaid card,” Dorn said.

The waits also contradict the administration’s promise that the online insurance marketplaces would bring a “no wrong door” approach to signing up for health care, regardless of a person’s income.

The reasons for the problems include technological glitches that prevented the federal insurance marketplace from transferring data on applicants to state Medicaid agencies and many states’ inability to handle an enrollment surge because of inadequate staffing, their own computer problems and other issues.

Feds Say They Are Making Headway

Officials at the Centers for Medicare & Medicaid Services (CMS) say they have made progress and can now quickly transfer data on applicants to all but three states — Alaska, Kansas and Maine — one reason that enrollment in the program surged by 1.1 million people in April.

The agency “is actively transferring accounts to all states that are ready to receive them,” said spokesman Aaron Albright. “Every state not receiving transfers can be enrolling people through alternative options,” such as getting a spreadsheet of names and addresses of people who have applied to the federal marketplace, he said.

Medicaid is the workhorse of the nation’s health system, providing coverage to about one in 5 Americans. Twenty-six states have expanded eligibility under the health law to everyone with incomes under 138 percent of the federal poverty level, or about $16,100 for an individual. But even states that did not expand the program have seen increased demand for coverage, as people who were previously eligible but not enrolled tried to sign up as a result of publicity around the new exchanges and requirements that most Americans have coverage.

Unlike applying for private insurance through the online marketplaces, which can be done only during a few months of the year, people can apply for Medicaid anytime.

While states are working through their backlogs, the next big test will come Nov. 15, when open enrollment for private plans resumes and spurs a surge in people applying for Medicaid. The enrollment system should be running smoother by then, most experts say.

Georgia Gets Applicant Data Only In May

For states that used the federal marketplace, www.healthcare.gov, a major complication was the technical issues that kept the federal site from sending complete applicant data to the states.

Georgia’s Medicaid agency said it began to get applications from the federal marketplace only in May, and many of them were missing key information.

Trish Riley, a former Maine health official and a member of a commission that advises Congress on Medicaid, said the problems underscore the continued differences in state capabilities and cultures. Ramping up for a surge in Medicaid enrollment can be a big change for states that for decades focused on reducing fraud and abuse.

“It’s hard to change that culture, said Riley, an adjunct professor of health policy at University of Southern Maine.

California — which expanded eligibility–has experienced problems because of the sheer number of applicants and that enrollment is being handled by 58 counties using different computer systems, Riley said. About half of the 900,000 pending applications were made in the last 45 days, said California Medicaid spokesman Tony Cava. “Some [applicants] have not responded yet to our requests for …information [such as income].  Technology issues have also contributed,” he said.

The process has been further complicated by state eligibility reviews that have found many people ineligible who applied through the federal marketplace.  States were always expected to make final eligibility decisions, but that has taken longer in some places than anticipated.

Of the 245,000 Ohioans who applied through healthcare.gov, for example, 93,000 were found ineligible, said state Medicaid spokesman Sam Rossi. Another 66,000 had already enrolled or are in process of enrolling directly through the state Medicaid program. Ohio, which expanded Medicaid eligibility, has more than 65,000 cases pending, he said.

“States are digging out from huge numbers of applications they received,” said Rachel Klein, enrollment program director at consumer group, Families USA. She said some states did not increase staffing enough to be ready for the surge of applicants.

Texas, which did not expand Medicaid, rejected 79 percent of the 200,000 applicants received through healthcare.gov. Many of the transferred applications were requests for long-term care services or were ineligible because of their incomes or because they are childless adults, said Texas Medicaid spokeswoman Stephanie Goodman.

Matt Salo, executive director of the National Association of Medicaid Directors, is hopeful the worst is over. He said the computerized handoffs from the federal exchange are occurring faster and states are getting more data to approve or deny applicants.

“I don’t want to say it’s been solved,” he said, “but it’s definitely getting a lot better.”