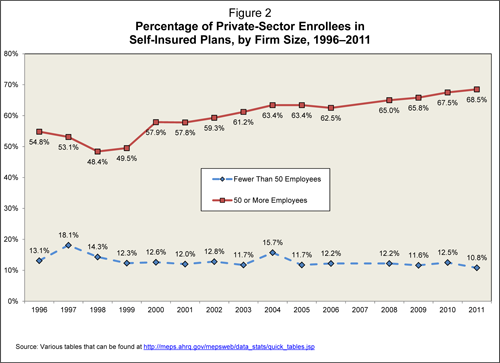 The number of U.S. workers covered by self-insured health plans—in which their employer assumes the financial risk for health costs rather than paying insurance companies to do that—has grown steadily in recent years. But such plans are still primarily used by large companies, not small employers, a new study finds.

As of 2011, more than half of U.S. employees were covered under these self-insured plans, compared to about 41 percent in 1998, according to a report by the Employee Benefit Research Institute. These plans can lower costs for employers by reducing administration, exempting them from state-mandated services, and allowing them to provide uniform coverage across state lines.

Sometimes workers do not even know that their employer is self-insuring because the company will hire a traditional insurance plan to administer the program.

Businesses with less than 50 employees have not followed the same trend, with only 10.8 percent of private sector enrollees in self-insured plans in 2011. The number has remained generally around 12 percent since 1998, according to EBRI.

The analysis also found that the rates varied by state — Hawaii was on the lower end with 30.5 percent of workers enrolled in self-insured plans, and Indiana and Minnesota were on the higher end with more than 70 percent enrolled. Massachusetts, the only state to have enacted universal health care coverage, saw more medium and large firms choose self-insurance.

The report’s author, Paul Fronstin, director of EBRI’s Health Research and Education Program, says the research was prompted by speculation that smaller firms increasingly may move to a self-insured model because of their concerns about rising insurance costs under the 2010 federal health law.

“Employers generally, and small employers particularly, concerned about the rising cost of providing health coverage may view self-insurance as a better way to control expected cost increases,” notes Fronstin. “This new analysis provides a baseline against which to measure future trends.”

In a separate issue brief, researchers from The Urban Institute said the health law will make self-insurance plans more attractive to small employers because of less price discrimination against small groups.

But since the federal regulations don’t apply to self-insurance, authors said a small business migration to the plans could “undermine the effectiveness of the Affordable Care Act’s small-group reforms and to destabilize the market.” But the brief describes ways that federal or state regulation can help mitigate that problem.