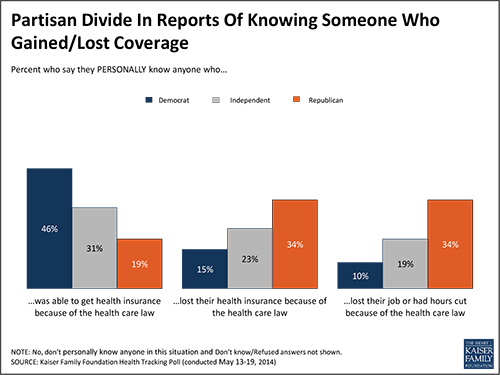 More than four years after enactment of the health law, six in 10 Americans say neither they nor their families have been affected by the sweeping measure, according to a poll released Friday.

The relationship between partisanship and reported impact of the law holds when controlling for other factors such as income, race/ethnicity and insurance status, the poll found.

As campaigns heat up for the November midterm elections, the poll also took a look at voters’ attitudes about the law. Fifty-one percent of registered voters are tired of hearing candidates talk about the health law and would rather focus on other issues, such as jobs, while 43 percent say it is important for candidates to continue to debate the law. Overall a majority of registered voters (52 percent) say they will consider a candidate’s position on the health law as one of many important factors in their vote. About three in 10 voters say it would be the deciding factor for their vote.

The public’s overall view of the law is unchanged compared to previous KFF surveys, with 38 percent of those surveyed holding a favorable view and 45 percent an unfavorable one. As in previous tracking polls, a majority of the public overall -– 59 percent –- including majorities of Democrats and independents, say they want their congressional representative to improve the law rather than repeal it and replace it.

The poll was conducted among 1,505 adults, including 1,279 registered voters. The margin of error is +/- 3 percentage points for both groups.

Most Americans Say The Health Law Has Not Affected Their Families: Poll