Massachusetts is launching a sweeping plan to hold down health care costs. A new law is partly designed to get patients to help drive down prices by shopping for medical care.

So when I had a series of migraines over the summer, I decided this was an opportunity to be an engaged, savvy patient. 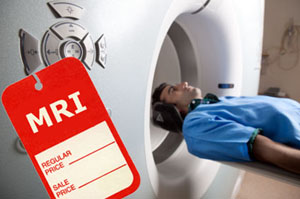 First decision: whether to even get the doctor-recommended MRI. It’s a very expensive test, and I thought maybe the headaches would just disappear.

Now, I have insurance with no deductible, so wherever I went was only going to cost me a $25 copayment. (Apologies to all of you with high-deductible or tiered plans out there.)

When I couldn’t get through to Newton-Wellesley, I tried Mass General, which is what we usually hear is the most expensive and best hospital in the country to go to. They were $5,315. That’s for an uninsured patient. For one MRI.

But they couldn’t tell me what my rate was going to be as an insured patient. They said they didn’t have that information. So I hit another wall with another hospital.

Then I tried an independent lab, called Shields. It’s a chain that specializes in MRIs and other radiology tests. Shields said it would have charged between $2,000 and $3,600 for this test (the higher cost is for an MRI with an injectable dye to show contrast). But that’s not what they would bill my HMO Blue Cross plan for my MRI: $600 for the MRI without the contrast dye, and $1,200 for the MRI with the dye is its negotiated rate with my health plan.

Newton-Wellesley also didn’t tell me that I’d had two MRIs while lying there in the cave wearing headphones that are supposed to ease the earthquake rumble effects of the test. I found this out months later when I got the “Explanation of Benefits” (EOB) from my insurance company. I still don’t know why the hospital ran two tests. My doctor says he only ordered one. So the $7,468 doesn’t sound as bad if it’s the price of two tests. This is all incredibly confusing and about as far from the transparent process that is supposed to help us “shop” for care as you can get.

If you want to try to shop around, here are few things you should know, if you don’t already:

1) Insurance companies negotiate different rates with different hospitals. I’ve had a hard time getting doctors or hospitals to give me the negotiated rate, but Blue Cross will tell me, if I’m willing to wait on hold and have the exact code for the exact procedure I need. Which brings me to  …

2) Get the code for the test of procedure you need. In some cases there will be several billing codes. For example, my MRI codes were 70551 without the dye, 70552 with the dye. I used those numbers in so many different conversations I don’t think I’ll ever forget them. And in the end, since I had another test I didn’t know about, an MRA, I wasn’t using all the right codes. This process really could drive you crazy.

3) Sometimes your insurance company will send you the EOB that lists the price they actually pay the hospital, but good luck trying to decipher all this paperwork.

4) The physician’s charge is often a separate bill, or rather two bills: what the doc charges and what the insurance company pays. You have to ask a lot of questions

Why the huge disparity between what a hospital charges for an MRI and what a stand-alone clinic such as Shields charges? Newton-Wellesley said that it costs a lot to keep a hospital open 24 hours a day. Hospitals lose a lot of money on some services and make it up other other services. MRIs or other tests are a place that they often make up for money lost on services such as mental health.

And hospitals say they lose money taking care of patients with Medicare — that’s mostly for the elderly — or Medicaid — that’s government insurance mostly for the poor. So private insurance payers like me end up paying more for these tests so that the hospitals can have everything balance in the end.

While Shields lab doesn’t have the overhead of a hospital, Tom Shields, the company’s president, says charging more for an MRI to make up for losing money on other services is just a sign that health care finances are really broken. “You’re reimbursing for diagnostic imaging at a very high rate to justify the underpayment for other lines of health care. It’s sort of like justifying the $500 Ace bandage. The logic isn’t there.”

I wasn’t ever able to find out how much of the charge for an MRI is based on “real” costs – like cost of the machine or the salaries of the technician or doctor.

These real costs vary, but in many cases, not much. We know that hospitals with a strong brand name use that brand to boost their charges. Rick Siegrist, who teaches health care management at the Harvard School of Public Health, says hospitals, much like computer giant Apple, can set their charges as they see fit: “A lot of times, people think they’re just going to look at what their cost is and put a little markup on that and that’s what the charge will be. That’s not the way it’s done, just like it’s not the way it’s done in private industry.”

We have the health care industry telling us to shop around, to be smart consumers, to make wise choices, and yet it’s really difficult to do that, because we don’t understand how hospitals set prices, and it can take hours to find a price. The whole pricing system seems very arbitrary. And we’re left trying to make choices based on incomplete or wrong information.

There may be some hope, according to Dr. Gene Lindsey who runs Atrius, the state’s largest physicians group. He said while it’s a long way way off, “Atrius Health will, in a very, very focused way, begin the work that’s necessary to try to deliver what the bill asks for in terms of cost transparency.”

Atrius and a few other physicians groups have started putting some price information in the record that doctors can see when they are speaking to a patient. It’ll be a tough task to say, “You’re going in for an appendectomy and here’s what it’s going to cost,” because there are so many variables when you go into a hospital for a procedure. But Atrius is shopping for software that will pull all the information, like my health insurance data, together so that they can say, “OK, you’re an HMO patient, here’s what you’ll pay” or, “You have a high deductible, here’s what you’ll pay.”

Then the broader advice is: If you really have to pay attention to price because you have a high-deductible or a tiered coverage plan, then do a lot of deep breathing. Be ready for a long journey that will take some patience.

Oh, and I don’t have a brain tumor or anything serious. My doctor sent me a note. My MRI and MRA showed “white matter with a propensity for migraine.” White matter is just brain tissue, by the way, not little bits of white junk floating around in my brain. I’m fine; I just need to get more sleep.