Such “multi-state” plans were included in the federal health law to boost competition among insurers, particularly in states with few carriers. They were also seen as a consolation to supporters of the failed effort to require a government-run “public option.”

Debate continues about whether the plans would fulfill those aims, but the bigger question now is which states will have them in October, when new online marketplaces begin selling insurance to individuals and offering federal tax credits to help cover the cost of premiums to those who qualify.

The law requires at least two national plans in every state within four years, overseen by the federal Office of Personnel Management (OPM), which will negotiate rates and contracts.  The law says at least one of the multi-state insurers must be a nonprofit, and at least one must not offer abortion services. 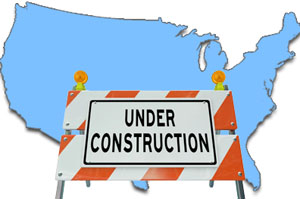 OPM has declined to name the insurers or states under consideration, but the White House says there will be national plans in at least 31 states.

Blue Cross Blue Shield plans are expected to be one of the multi-state plans, raising questions about whether that will really result in greater competition since they are already in every state and dominate some individual markets.

Bradford said he does not know whether the national and state plans will differ in price or benefits since filings aren’t due until the end of June.

“It will be better for competition if they are somewhat different,” he said, adding that he has also heard his state may get a second national option.

Blues plans have submitted their intent to offer a national plan that would be in 31 states next year, said Alissa Fox, the association’s senior vice president for policy. Those include New Mexico, Michigan, Kansas and Arkansas, according to public filings.

Even if the Blues are approved in those states, that may still leave 19 states potentially without any national plan.

Other insurers, such as Humana, have said they will not offer multi-state plans next year.   A few, like UnitedHealth Group, have been noncommittal.

“The idea was to offer at least two options” to consumers, no matter what other insurers might be there, said Timothy Jost, a professor at Washington and Lee University School of Law.

In some counties or regions, especially in rural areas, such plans may be the only coverage available to people, he said.

Initially, the plans must be able to offer coverage in at least 30 states– and in all states within four years – a significant hurdle for smaller insurers that don’t have robust national networks of doctors and hospitals.

Iowa Insurance Commissioner Nick Gerhart said he wants to boost competition and has asked OPM to give Iowa priority for a multi-state plan.

“Ideally, an exchange will have a variety of choices,” Gerhart said in an email.

Final rules governing the plans were issued in March after the government reviewed more than 350 comments.  The rules give insurers some leeway – allowing them, for instance, to cover portions of a state initially. Some fear that could lead plans to avoid geographic regions with higher rates of poverty and illness. OPM is supposed to ensure the provision is not used to discriminate.

“Does this increase competition, or does it give the dominant insurers a bigger share of the market?” said Kirsten Sloan, vice president of the National Partnership for Women & Families, an advocacy group in Washington that submitted comments. “That remains a question for us.”

“What this does is it will give larger plans an expanded market share,” he said. “My view is you will see an acceleration of this consolidation in health insurance markets over time.”

But groups that had supported a government-run public option are cautiously optimistic.

The plans have “great potential,” but as with so much in the health care law, “the execution makes a huge difference,” said Ethan Rome, executive director of Health Care for America Now, a liberal advocacy group. “In some states, it might depend on who the carrier is as to whether or not it increases choice and competition.”

National Health Plans, Designed To Spur Competition, May Be Unavailable In Some States Next Year