Caroline Brown, a sophomore at the University of Missouri, got a fever over Thanksgiving break. Soon it became painful to bite down, and her cheek began to swell. A trip to her physician confirmed it — Caroline had the mumps.

“Mumps kind of sounds like this archaic thing,” Brown said. “We get vaccinated for it; it just sounds like something that nobody gets.  So I just didn’t think that it was possible that I would get it.”

But mumps is back, and is having its worst year in a decade, fueled in part by its spread on college campuses. Since classes began at the University of Missouri in August, school officials have identified 193 mumps cases on campus, with more unreported cases likely. And nationwide, more than 4,000 cases have been reported to the Centers for Disease Control and Prevention — nearly triple the cases in 2015 and the largest spike in 10 years.

The spike has some public health officials asking questions about the existing vaccine protocol.

Dr. Susan Even, executive director for the University of Missouri’s Student Health Center, said she hasn’t seen anything like the current outbreak in her 31 years at the school. She said all of the students her team treated for mumps had two MMR (Measles, Mumps and Rubella) vaccine doses — a school requirement — but they got sick anyway.

“The fact that we have mumps showing up in highly immunized populations likely reflects something about the effectiveness of the vaccine,” Even said.

Outbreaks are affecting several other universities. More than 300 cases were reported at the University of Illinois at Urbana-Champaign, and universities such as Iowa State, Tufts and Harvard have seen cases as well.

The largest current outbreak is in the state of Arkansas, which reports over 2,000 cases among school-age children and adults throughout the state since August this year.

Mumps is no longer a particularly common illness, and it rarely causes serious complications. However, there is no treatment for the viral illness except rest. Common symptoms include swelling in the cheek and neck, fever and pain in the jaw, which can be alleviated by over-the-counter medications.

The symptoms might feel like a flu at first, said Even, “but the characteristic that we look for is pain in the jaw and cheek area and swelling.”

Dr. Janell Routh, a medical epidemiologist for the CDC who specializes in mumps, said it’s not surprising outbreaks are occurring on college campuses, where students often live in close quarters, eat together and party together. 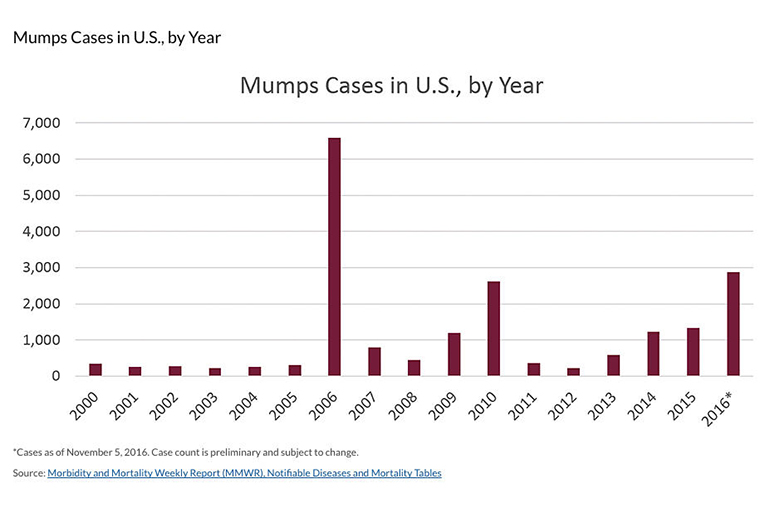 “College campuses provide that perfect medium for the spread of the mumps virus,”  Routh said. ”We know a lot of the behaviors that take place on college campuses are amenable to the spread.”

The outbreak in Arkansas has been affecting a more diverse population — school-age children and adults.

Dr. Dirk Haselow, the state’s epidemiologist and medical director of outbreak response, said the state’s health department has been holding clinics in places like churches, and schools to dispense the MMR vaccine.

“We have people working 12 hours a day, seven days a week for months trying to get this under control. It’ s not for lack of effort,” Haselow said.

The severity of the outbreak has Haselow questioning the vaccine dosing protocol.

“If you look at MMR vaccination coverage rates in adults, that’s middle of the road,” Haselow said. “It was incorporated into the childhood immunization schedule in the ’80s.”

Normally, people only receive two doses of the vaccine, but in Arkansas and also at the University of Missouri, officials are now recommending a third dose.

It’s not clear if a third dose is effective in preventing the spread of mumps. The CDC has not issued an official recommendation, stating in an online report from July: “The effectiveness of a third dose of MMR vaccine has not been established, but rationale exists for its use in outbreak settings.” However, both the state of Arkansas and the University of Missouri are hoping this will help stem the outbreaks.

Haselow said he also worries there may be something about this particular outbreak that is making the mumps vaccine less effective against it.

“Despite all that effort, we still continue to see this outbreak worsen. And we are concerned that the outbreak may indicate something unusual,” he said.

He explained that the mumps vaccine was developed in the 1960s using one specific strain of mumps, and now some of the cases showing up in Arkansas are a different strain.

“We are wondering whether the circulating strains have evolved away from the vaccine,” Haselow said.

Researchers at the CDC aren’t sure they agree yet, according to a spokesperson, but they will be examining the data from the Arkansas outbreak once it is declared over. Haselow said that some samples have already been collected and sent to the CDC for analysis.

Haselow stressed that the mumps vaccine is still the most effective protection against mumps infections. It makes it less likely you will contract mumps and greatly reduces the chances for severe complications if you do.

Complications are rare but include things like swelling in the testicles, meningitis and deafness that can have lasting implications.

“Vaccines reduce your risk of mumps ninefold. We’re 100 percent positive that these vaccines are preventing the severe manifestations of mumps,” Haselow said. “So they are helping, but they’re not perfect.”

Back at the University of Missouri, some students are treating the outbreak as a joke referring to the last month or so as “Mumps 2k16.”

Brown said that she knows several students who have or had the mumps, and she has even more friends who say they wish they could get mumps before finals.

“I definitely wouldn’t wish it on anyone, but if people would rather have mumps than take their accounting final, then I guess I can’t blame them,” Brown said.

This story was produced by Side Effects Public Media, a news collaborative covering public health.