Navigators aren’t allowed to mail paper applications for health insurance to the federal government on behalf of consumers. 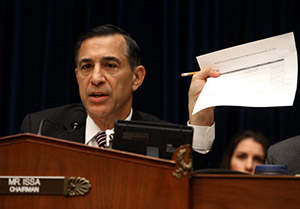 Kaiser Health News learned that the hard way after Rep. Darrell Issa, R-Calif., cited an October KHN blog post in a report about risks of fraud among navigators. We incorrectly reported that navigators with North Carolina nonprofit Mountain Projects, Inc., were mailing in paper applications on behalf of the consumers they helped enroll in the exchange back when the healthcare.gov site wasn’t working reliably.

“I have double checked with our navigators and they do not mail applications,” says Patsy Dowling, executive director of Mountain Projects Inc., a 130-employee nonprofit, which has a $360,000 federal grant for consumer outreach.  “Regardless, the report reflects poorly on our agency and could harm all the work we are trying to do in our community.”

Issa’s Committee on Oversight and Government Reform released the report, titled Risks of Fraud and Misinformation with ObamaCare Outreach Campaign:  How Navigator and Assister Program Mismanagement Endangers Consumers, on Monday.

We have corrected our blog post and informed Issa’s office of the error.

The post, titled “Navigators Tread Water As Website Problems Continue” and published on Oct. 24, focused on how problems with healthcare.gov and pressure from House Republicans were making it difficult for navigators to enroll consumers in exchanges. The post quotes Dowling saying the problems had “slowed us down.”

As an alternative to the troubled online application process, Dowling explained that Mountain Projects was instead helping consumers fill out the paper applications even though they are “pretty cumbersome and long. It takes much longer [than an online application], but that’s the only option, and people want to feel like they’re enrolling.”

UPDATE: A spokesperson for Issa’s committee said in an email that the risk of fraud is greater after an application leaves the hands of the consumer and that the committee would take “a second look at this particular situation” in light of KHN’s correction.