Two states are making inroads into revealing some of the biggest secrets of health care by publishing price information to help consumers comparison shop for doctors, dentists and prescription drugs.

New Hampshire, which already had the nation’s most advanced website allowing people to compare the cost of specific medical procedures, last week added prices for 16 dental procedures and 65 prescription drugs. The website, NHHealthCost.org, is run by the state insurance department and lets consumers see how much they would have to pay based on the price their insurer negotiated with each provider, rather than the sticker price that is charged. The site also shows the price uninsured people must pay.

California on Wednesday released an expanded version of its quality report cards on 154 large physician groups. Those cards, which already assess clinical quality and patient experiences, take a different tack than New Hampshire. Instead of drilling down on specific procedures, the report cards summarize the total cost of medical services run up by the average patient of each group. The medical groups care in total for more than 9 million people.

Elizabeth Abbott, the director of California’s patient advocate office, which put together the report cards, said that by coupling the cost rating with similar star ratings for quality, consumers and those who decide which medical groups to include in insurance networks will see that the most expensive medical groups may not be the ones that provide the best care.

“We want to have human resources departments and executives for health providers look at this to guide their decisions,” Abbott said. 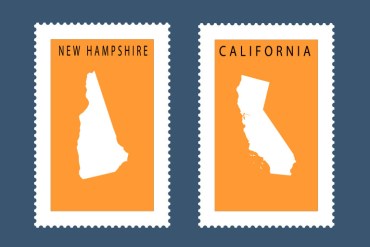 New Hampshire’s and California’s efforts follow a setback last month for states seeking to compile price listings through insurance claims data. The U.S. Supreme Court ruled that Vermont officials cannot force insurers to turn over the information. It is not clear yet how that ruling will affect other states that already collect insurance information. Along with New Hampshire, those include Kansas, Maine, Maryland, Massachusetts, Minnesota, Oregon, Rhode Island, Tennessee, Utah and West Virginia, according to the APCD Council, which tracks all-payer claims databases.

The New Hampshire initiative offers consumers a broad array of pricing information based on claims insurers must report. For instance, around Concord, the state capital, 90 10-milligram pills of atorvastatin, the generic of the blood thinner Lipitor, cost on average $30 at Walmart, $74 at the supermarket Hannaford Brothers, $98 at CVS, and $118 at Walgreens, according to the website. Depending on the dentist, the average price of a silver filling around Concord varied from $138 to $242. The prices might be lower for patients who have insurance that picks up some of the cost.

“Adding dental and pharmacy will be powerful” in New Hampshire because these are items consumers often do shop around for, said Suzanne Delbanco, director of Catalyst for Payment Reform, a San Francisco-based-nonprofit that rates how transparent each state makes health care prices. “The hope is that once consumers get used to shopping for these types of services, they will feel more comfortable looking for other more complex and costly services.”

The ratings take into account the location of each medical group and how healthy or sick its patients are. The difference in ratings is due to discrepancies in the prices the practices charge and the type of treatments their patients get, according to Jill Yegian, an executive at the Integrated Healthcare Association, which collected and helped analyze the data for the patient advocate’s office.

“It could be they are not very efficient, they do not coordinate care well, they do not do things to keep the prices within reason,” Abbott said.

Minnesota is the only other state that offers that same type of information. California relies on voluntary cooperation from medical groups for the data collections, so the Supreme Court ruling should not affect them.

Most studies have found that consumers have limited power to shop for medical services by price. An analysis this month by the Health Care Cost Institute found that a majority of health spending went to services where that would not be possible, such as emergency hospitalizations. But 43 percent of health care spending went to services where patients could potentially shop around, such as drugs, doctors, colonoscopies and hip and knee replacements.

“This is an interesting finding — that consumers might be able to effect, on average, up to nearly half of their yearly out-of-pocket payments by price shopping,” the report said. But it added that even in those circumstances, consumers had less financial motivation to seek better deals because insurance benefit designs shield them from the majority of costs.

“Overall, we come to the conclusion that the potential gains from the consumer price shopping aspect of price transparency are modest,” the analysts wrote.

In New Hampshire, about 3,000 people a month use the website, said Maureen Mustard, director of health care analytics at the insurance department. The state is hoping that more consumers will pay attention following this month’s re-launch.

This story was updated to correct the average costs noted on the California report cards.