This story is part of a reporting partnership that includes

New York Gov. Andrew Cuomo says creating a health insurance exchange for the state is a priority for 2012.

State-run exchanges are mandated by the federal health law. Exchanges would effectively allow states to play the role of insurance broker to help individuals and small businesses buy coverage from private companies. 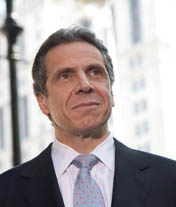 Last year, a bill almost passed that would lay the groundwork for an exchange. It  hit an impasse in the Republican-controlled state Senate.

“There was a lot of apprehension about moving forward,” said Sen. James Seward, chairman of the Senate Insurance Committee. Seward is a Republican from Oneonta, N.Y., who supports the bill. “There were some [Republican] members who didn’t want to seemingly endorse so-called ‘Obamacare’ with the passage of this bill. There were others that had a number of questions regarding the legislation.”

Seward said the federal government should clarify all the costs and obligations in creating and running an exchange, before Albany takes action. Although Cuomo has said the tab for running an exchange will be picked up by Washington, Republican Senate Majority Leader Dean Skelos’ office released a statement expressing concern that the health law and the exchange could cost New York up to $3.75 billion in additional taxes.

Nationwide, there are two basic models for exchanges under discussion: one has the state playing an active role in negotiating with insurance companies and the other has the state acting more passively, as a clearinghouse for health insurance plans.

As it currently stands, federal law requires states to have the rough profile of an insurance exchange in place by the start of 2013 — and an exchange fully up and running a year later.

If states aren’t ready in time, the federal government would impose an exchange on them.

In New York, the nearly-passed bill from last year doesn’t commit New York to either active or passive track. That decision would be made later, after the bill is passed, by board members appointed by Cuomo and state legislative leaders.

Seward is confident a bill can pass the Republican-controlled Senate by the end of the session, which started last week and runs through June. Coincidentally, that’s the month the U.S. Supreme Court is expected to rule on the constitutionality of the health law.

“I believe that one way or another it would be good for the health insurance market to have an exchange, even if the federal legislation goes away,” Seward said. “I’m a believer in this concept. It’s very popular in the business — particularly the small business — community. I would like to see us move forward as a state. We just have to work out some additional details and convince the members of the Senate that this is in fact a good piece of legislation.”