Patient advocates say the exclusion of one of Missouri’s top hospital systems from policies offered by the region’s biggest insurer under the Affordable Care Act could hinder treatment for some patients and force others to switch doctors.

The network for the Anthem BlueCross BlueShield plans, which will be sold through Missouri’s “Obamacare” marketplace, does not include BJC HealthCare and its 13 hospitals — among them Barnes-Jewish Hospital, the area’s premier academic medical center, and St. Louis Children’s Hospital. 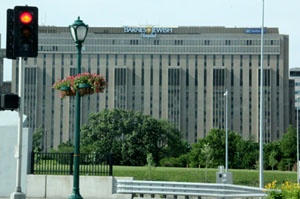 “That is a major concern for a lot of reasons,” said Andrea Routh, executive director of the Missouri Health Advocacy Alliance. “Children’s Hospital, which in my mind is an essential community provider, is part of that network. If they’re not including the Children’s Hospital, care for children could really be compromised.”

Anthem confirmed Wednesday that policies sold through Missouri’s online insurance marketplace, scheduled to open for enrollment Oct. 1, will not include BJC.

“Unfortunately, we were not able to reach agreement with BJC,” said Anthem spokeswoman Kim Ashley, adding that the insurer’s network was built for affordability and quality.

The plans are similar to “narrow networks” assembled elsewhere by Anthem and other insurers to bypass higher-priced health systems and offer more-affordable coverage. But consumer advocates worry tighter networks will disrupt care and limit access for middle- and lower-income consumers, many sicker than average.

With only one other insurer besides Anthem planning to sell policies through the exchange in eastern Missouri, the region will have some of the most limited choices anywhere under the health act’s marquee innovation, new federal data show. The other insurance company has not been identified.

“We knew it was going to be narrow but it surprised us” about the hospitals left out, said Adam Berkowitz, a benefits consultant with Caravus. “It was kind of eye-opening.”

“None of them had heard from Anthem,” he said. “I’m telling everybody this is the biggest unknown since Geraldo Rivera opened Al Capone’s vault.”

BJC, whose other facilities include Christian Hospital and Missouri Baptist Medical Center, is St. Louis’s biggest employer. BJC did not respond to a request for comment.

The health law created the marketplaces, also known as exchanges, to offer heavily subsidized coverage to individuals and families who do not have insurance through employers or government programs such as Medicare.

In 2011 Anthem covered about 79,000 members in Missouri under its individual and family policies, many of whom are expected to seek care through the exchange because it will be more affordable. There were about 800,000 uninsured Missourians in 2011.

The federal Department of Health and Human Services is running Missouri’s marketplace after state voters passed a measure prohibiting Democratic Gov. Jay Nixon from creating an exchange without legislative or voter approval.

Narrow networks present the opportunity for lower costs via discounts from select hospitals and doctors in return for patient volume. But smaller networks can require members to travel farther for care or make it hard to get appointments, patient advocates say.

“It means that the stranglehold that large hospitals have held over health insurance plans —that has kept them from reducing premiums —may be broken,” said Timothy Jost, a law professor at Washington and Lee University and consumer health expert.

On the other hand, he said, “some of the plans are excluding essential community providers… that are best equipped to deal with the problems of lower-income people.”

Excluding key care providers from exchange plans has generated concern and complaints in other states.

Washington regulators initially rejected four carriers from that state’s exchange, expressing concerns that their networks were too restrictive. All were eventually approved.

Maine regulators held public hearings on Anthem’s intention to exclude some hospitals from its ACA marketplace plans. Anthem is the only insurer to offer policies next year on the exchange in New Hampshire, where it left 10 of 26 state hospitals out of the network.