Primary care doctors have reported problems making referrals for patients who have purchased some of the cheaper plans from the federal insurance marketplace. Complaints about narrow networks with too few doctors have attracted the attention of federal regulators and have even prompted lawsuits.

But they’re also causing headaches in the day-to-day work of doctors and clinics. “The biggest problem we’ve run into is figuring out what specialists take a lot of these plans,” said Dr. Charu Sawhney of Houston. 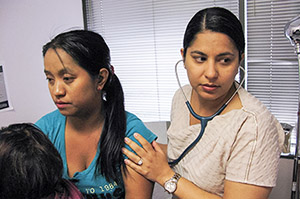 Dr. Charu Sawhney of Hope Clinic in southwest Houston listens to the lungs of Mang Caan, a refugee from Burma. Dr. Sawhney has run into trouble finding specialists to treat some of her patients newly covered by Affordable Care Act insurance plans (Photo by Carrie Feibel/Houston Public Media)

Sawhney is an internist at the Hope Clinic, a federally qualified health center in southwest Houston, in the bustling heart of the Asian immigrant community. Her patients speak 14 different languages, and many of them are immigrants or refugees from places as far flung as Burma and Bhutan. Most of her patients are uninsured, which means she is familiar with problems of access.

But the limited options of some of the HMOs sold on the marketplace surprised even her.

“I was so consumed with just getting people to sign up,” she said, “I didn’t take the next step to say ‘Oh by the way, when you sign up, make sure you sign up for the right plan.’”

Understandably, a lot of Sawhney’s patients picked lower-cost plans, “and we’re running into problems with coverage in the same way we were when they were uninsured.”

One of her patients is a Chinese immigrant who purchased a Blue Cross Blue Shield HMO silver plan, and soon after was diagnosed with stomach cancer.  Sawhney found a Mandarin-speaking oncologist who participated in the plan, but she and the oncologist soon ran into trouble trying to schedule treatments. “The process just isn’t as easy as we thought it would be,” she says.

It was tough to find participating Houston hospitals and doctors. The two largest hospital chains in Houston, Houston Methodist and Memorial Hermann, are not in that plan’s network. Neither is Houston’s premier cancer hospital, MD Anderson Cancer Center.

Those are precisely the hospitals that the patient’s oncologist, Dr. Paul Zhang, calls on the most. He says coordinating surgery or radiation usually isn’t a problem, because most of his patients have insurance plans with wide networks.

“I could not find a surgeon,” Zhang said. When he finally found a surgeon who actually took the insurance, it wasn’t someone he had ever worked with before. He said he would have preferred a surgeon who specialized primarily in cancer, because the patient’s cancer was complicated and had spread to 30 lymph nodes.

“You have limited options,” he said of the patients in the HMO. “So you’re like a second-class citizen, you know? That’s my feeling, you have this insurance and you cannot see certain doctors.”

Sawhney was less surprised by the barriers. Medicaid patients have similar problems finding doctors, and her uninsured patients have always struggled to find care.  But she thought the Affordable Care Act would be an improvement.

“I work so hard to get people into specialists, and I feel like you know, we have a break,” she said, recalling her hopes for the marketplace plans. “And then I realize ‘Oh, well never mind, we still have to work just as hard to get that same amount of care.’”

The biggest irony, she added, is that even Harris Health, the county-wide public hospital system in Houston, doesn’t take all the new marketplace plans.  Yet Sawhney can still send uninsured patients there for cancer treatment.

The patient with stomach cancer said the referral process was bewildering. (He asked not to be identified because he has not shared his diagnosis with close family members.)

“The (insurance) agent said that lots of doctors will accept that insurance,” the patient said. “But when I got sick I found out nobody wants that kind of insurance.”

Narrow provider networks are not new, but they’ve attracted attention again with the rollout of the ACA. Analysts point out that narrow networks are a powerful tool for insurance companies seeking to control costs – especially since they can no longer control costs by excluding sick people or adjusting premiums by gender or age.

The insurance industry’s position is that patients have choices. Plans with access to more hospitals and specialists are available, but usually at a higher price.

“Our goal was to offer an array of plan choices,” says Louis Adams, a spokesman for Blue Cross Blue Shield of Texas. “We created more focused networks as a way to offer a broad range of plans with lower premium prices, both on the exchange and in the retail market in general.”

But consumer advocates note that many people who bought marketplace plans don’t understand the trade-offs involved in picking a plan with a narrow network.

“They might never have had health insurance, they might not understand what a network is, much less a provider directory,” said Stacey Pogue, a health policy analyst with the Center for Public Policy Priorities, a left-leaning think tank in Austin. “These people might not actually understand when they’re signing up for an HMO that it’s a very narrow network.”

And not everyone is having trouble with their network. A survey from the Commonwealth Fund found 73 percent of people who had purchased a new marketplace plan were satisfied. When it came to accessing doctors, however, the results were mixed: 54 percent reported their new plan had “all” or “some” of the doctors they wanted. But 39 percent didn’t know which doctors were included in their plans. Five percent said the new plans had none of the doctors they wanted.

Sawhney worries that when patients learn that some medical doors are closed, they will decide insurance is simply not worth the money.

The president of the Harris County Medical Society, Dr. Elizabeth Torres, said she fears there could also be a backlash among primary care doctors. Not because the narrow-network HMOs have lower reimbursements, she said, but simply because it’s too hard to find the specialists.

“If it’s going to cost us a lot of hassle, administratively and as far as finding the specialists, then it’s going to be less likely and less favorable for us to actually want to be part of the plan,” said Torres, an internist in the Houston suburb of Sugar Land.

Torres points out that the provider directories of insurance websites, which should make it easy to find in-network specialists near a certain zip code, can be inaccurate or outdated.

“There’s no guarantee because you see their name on the website, that they’re actually participating, and that’s an issue,” Torres said.

The Affordable Care Act requires plans sold on the marketplaces to include a provider directory and to include a notification if a provider is not accepting new patients. But federal regulators left it up to states to determine whether marketplace plans offered patients “reasonable access” to enough hospitals and specialists.

That could change going forward. CMS regulators have told insurers they will be examining the new batch of plans in 2015, to make sure plans offer “reasonable access” – particularly in the areas of hospitals, mental health, oncology and primary care. Regulators also hinted they might develop rules in the future that are more specific: for example, a limit on how far a patient must travel to reach an in-network specialist, or a limit on how long a patient must wait for an appointment.

Back in Houston, Sawhney and Zhang continued to work the phones on behalf of their patient. They eventually found a hospital where the patient could get chemotherapy and radiation, and he is currently in the middle of those treatments.

Despite the delays and difficulties, Sawhney still calls herself a believer in the law.

“I want this to work,” she said. “The health care exchanges make sense to me, but when the networks are so limiting I’m not certain how it’s going to pan out over the next couple of years. I think these networks need to change for this to be a reasonable solution to our healthcare issues.”

When enrollment resumes in November, she’ll tell her patients to shop more carefully, taking into account not just price, but whether they have a chronic illness and need access to a certain type of specialist or even a particular doctor or hospital.

It won’t be about the cheapest plan anymore, but rather the best plan.

Specialty Care Is A Challenge In Some ACA Plans