As fire raged in Ventura, Calif., earlier this month, Gracie Hartman made her way to the county fairgrounds to look for her friend, Fernando.

She found him there at the evacuation center, among 69 patients from the Vista del Mar acute psychiatric hospital, one of two such facilities in the county. They had been removed with little time to spare as the hospital was overtaken by flames.

Over the next couple of days, Fernando was transferred to one general hospital as a stopgap, then to another, because, unlike the first, it would accept his insurance.

“He was so upset, that he was throwing up,” said Hartman, who spoke on condition that Fernando be identified only by his first name to protect his privacy. “It was a nightmare.”

Overnight, the private hospital’s shutdown wiped out about two-thirds of the psychiatric hospital capacity in Ventura County, population 850,000. That a fire could so quickly devastate a county’s inpatient psychiatric services only underscores how few beds there are — a phenomenon that holds true across California and nationwide.

“It’s a huge loss,” said Dr. Bryan Wong, chief medical officer of the county-run Ventura County Medical Center, which has a 43-bed psychiatric unit. “It leaves us vulnerable. It was a crisis even before the fires. We were at full capacity consistently. Now, it’s turned into a level beyond that.”

There are about 8,805 acute psychiatric beds in California, according to the Office of Statewide Health Planning and Development — not enough, advocates say, to meet the need. California has about 15 psychiatric beds per 100,000 residents compared with a recommended standard of 50 beds for 100,000 people, according to the Arlington, Va.-based Treatment Advocacy Center, which promotes greater access to mental health treatment.

The country has struggled with a national shortage of psychiatric hospital beds for many years. Last year, the United States had 37,679 state psychiatric beds, down 13 percent from 2010, according to the center. 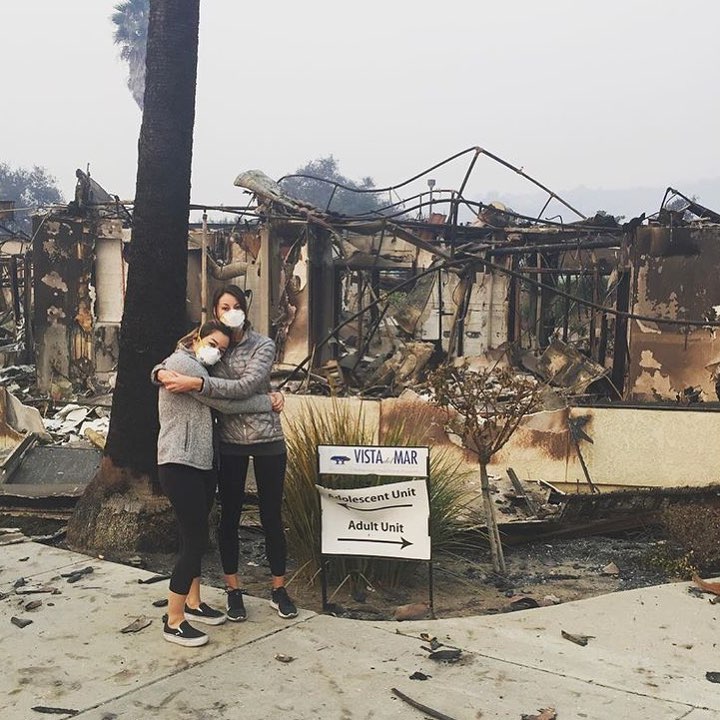 Former Vista Del Mar employee Jodi Ozaki stands with her friend Erin Tarkir in front of the burned hospital. The hospital’s closure wiped out about two-thirds of psychiatric beds in Ventura County, sending patients and their families scrambling to find other care. (Courtesy of Jodi Ozaki)

The closure of public psychiatric hospitals has left many people with nowhere to go for treatment during an acute mental health crisis, according to the Virginia-based center. Without a reliable source of inpatient care, patients languish in overcrowded emergency rooms or, even worse, deteriorate until they’re arrested and jailed, often for minor infractions. Some become homeless.

In addition, many people experience severe psychiatric problems while trying to cope with disasters — and those very disasters can limit their options for care.

In recent years, catastrophes have damaged or threatened psychiatric facilities elsewhere around the country, sending doctors and families scrambling to transfer patients to other facilities, sometimes far away from their community, friends and family.

In 2011, Tropical Storm Irene severely damaged Vermont’s state-run psychiatric hospital, forcing the evacuation of 51 residents. The hospital never reopened, and the state replaced it with a smaller facility several years later. Before Hurricane Katrina struck in 2005, 73 adult, adolescent and child patients at an acute psychiatric facility were evacuated by bus from New Orleans to Memphis, Tenn., on a weekend night — a trip of about 400 miles.

Vista del Mar, an 87-bed acute care facility and the only one that treats children and teens, as well as adults, in Ventura County, didn’t completely burn down, but it lost key buildings. Although its owner, Corona, Calif.-based Signature Healthcare Services, has said it will rebuild, it is unlikely to reopen soon.

Vista del Mar’s closure further burdens the region’s emergency rooms, which often board psychiatric patients for days on end while they wait for a mental health bed to open up, Wong said. These patients are seriously ill, posing a danger to themselves or others, he said.

A nearby addiction treatment center, Evolve Camarillo, has offered “emergency mental health triage” for teens, but the center is not a licensed psychiatric hospital.

In Ventura, Wong said the county-run acute psychiatric facility accepted 20 patients from Vista del Mar the night they were evacuated, hastily revamping a triage area to house them. Other patients, including children and teens, were sent to hospitals as far away as Bakersfield and Los Angeles.

The patients likely would stay for several days, then be referred to outpatient treatment if they were well enough, Wong said.

Fernando, who suffers from a rare bone disease, was being treated for anxiety and depression at Vista del Mar. He eventually was transferred to a Kaiser Permanente psychiatric facility in Los Angeles, Hartman said. (Kaiser Health News is not affiliated with Kaiser Permanente.)

Blair Stam, executive vice president for Vista del Mar’s owner, said his company plans not just to rebuild but to expand the hospital “because the need is so great.”

The hospital has been between 85 and 90 percent full at any given time, he said. He hopes state health officials will fast-track construction plans, he said. But that could take years, given complex hospital building regulations and what’s likely to be intense competition for construction resources in the region.

The vast and deadly Thomas Fire, which has burned an estimated 272,000 acres and destroyed hundreds of buildings, was only about 55 percent contained as of Wednesday, according to firefighters.

In the meantime, “families are scrambling” as their loved ones are on the verge of being discharged from the far-flung hospitals they were sent to after the fires, said David Deutsch, executive director of the National Alliance on Mental Illness-Ventura chapter, an advocacy group. “We’re in pretty dire straits here” Deutsch said. “It’s quite chaotic.”