More than 40 percent of South Florida hospitals fell below national standards for preventing certain types of common infections in their patients in 2013, according to federal data.

At the same time, 56 percent of local hospitals performed better than expected in controlling infections, according to the same data, information that South Florida consumers could use when choosing a hospital. 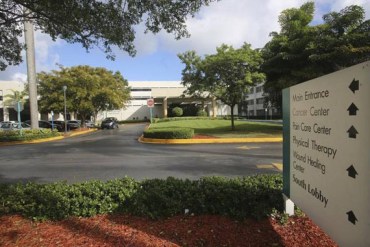 Patients were more likely to develop infections at North Shore Medical Center than at any other hospital in South Florida. (Photo by Marsha Halper/Miami Herald)

The ratings are part of a national effort to cut down on the most common infections patients contract in the very places they go to get well: hospitals.

The federal government has also taken action in the form of financial penalties. In 2008, Medicare stopped reimbursing hospitals for treating patients who acquired infections under their care. This year, as part of the Affordable Care Act, Medicare will fine hospitals that fail to meet standards on a variety of patient safety measures, including infections.

Steven Ullmann, a health policy expert at the University of Miami, called the penalties “significant” and said they had helped push hospitals to fight infections.

More than 3,300 hospitals around the nation reported data to the Centers for Disease Control and Prevention on six types of common healthcare-associated infections contracted by patients in 2013.

In South Florida, the CDC collected data from 32 hospitals in Miami-Dade, Broward and Monroe counties. Thirteen of those hospitals, or 41 percent of the South Florida total, failed to meet national benchmarks in at least one infection category, compared with 30 percent of hospitals statewide and 23 percent nationally.

“Any place in the country that finds its hospitals are lagging in an important area like infection rates needs hospital leadership to devote resources to address the problem,” said Robert Brooks, a patient safety expert who served as secretary of the Florida Department of Health between 1999 and 2001.

One in 25 patients in the hospital on any given day will contract an infection, according to the CDC, which also reported that 75,000 Americans die each year from hospital-acquired infections.

In Miami, North Shore Medical Center performed worse than CDC standards in controlling four types of infections, one of only six hospitals in the nation to fall below national standards in that many categories. No hospitals underperformed in five or more categories.

“We were able to analyze our data in real-time in 2013 and began to implement newer, evidence-based best practices that would allow us to improve our performance,” Beaver said.

Those measures include an emphasis on hand-washing, regular training for new and existing staff, and use of an antimicrobial liquid soap called chlorhexidine to clean patients at high risk of infections, including those using intravenous and urinary catheters.

Beaver said preliminary data for 2014 showed North Shore had seen a “significant” drop in the number of patients contracting infections but the hospital had not yet finalized the data and could not release it.

Bruce Rueben, president of the Florida Hospital Association, said in a statement that Florida hospitals had made progress in combating infections but that “there is still much work to be done.”

The CDC publishes infection data every quarter through Medicare’sHospital Compare website. Hospital ratings change as the data is updated. To look up infection ratings for hospitals throughout Florida including Miami-Dade and Broward counties, go to the Miami Herald’s interactive graphic.

Holy Cross Hospital in Fort Lauderdale performed well during the 2013 assessment, doing better than CDC standards in four infection categories, the most of any hospital in Florida. But recent data — not yet released to the public — shows that Holy Cross’ performance dropped in 2014 to an “average” rating in all four categories, according to Christine Walker, a spokeswoman for the hospital.

Brooks, the patient safety expert, said the publication of such data is a crucial resource for consumers.

“As younger patients age and require more services, they’re going to be more computer savvy and the ability to find out more about their hospital or their doctor online will be extremely helpful in helping them make decisions about their medical care,” he said.

The CDC takes mitigating factors such as the size of a hospital and whether it serves as a teaching institution into account when compiling its ratings, but some hospitals say this risk adjustment doesn’t fully capture their type of patients and the services they provide.

“Larger hospitals and those that have the resources to aggressively diagnose infections tend to be penalized by these data,” said Nancy Foster, vice president of patient safety at the American Hospital Association. “And the data are a bit behind the current state of events because of how long they take to compile.”

“The important thing for the public to understand is that hospitals are working very hard all across the country to improve their performance,” Foster said.

But for 2013, the hospital had improved its performance to average in MRSA. It also performed better than national benchmarks for preventing urinary tract and C. diff infections.

“It’s an extra expense for the hospital, it’s extra work for our staff, but we know it’s really important to eliminate these kinds of infections,” said Dr. Robert Goldszer, chief medical officer at Mount Sinai Medical Center in Miami Beach.

Goldszer said last year the hospital increased its use of chlorhexidine, the antimicrobial liquid soap, for its highest-risk patients, including patients undergoing surgery and those in the intensive care unit.

“Some of this is technique, but a lot of it is education,” Goldszer said. “Our staff knows that every day this has to be a major priority.”

Nearly Half Of South Florida Hospitals Below CDC Standards On Infections