“In-network” and “out-of-network” – for people with health insurance, those words mean one thing: money. If you don’t want to get charged extra, you get your treatment done in-network. It sounds straightforward, but sometimes it doesn’t work out that way, even when patients think they’re playing by the rules.

Jeffrey Craig Hopper, a probate attorney in Austin, Texas, knows all about following the rules. Still, accidents happen. Last June he was coaching a Little League practice session when an errant baseball smashed into his face.

His wife Jennifer Hopper remembers rushing to the field.

“His eye was swollen shut enough that we weren’t sure if he could see,” she said.

Even in that moment of panic, Jennifer made absolutely sure to drive him to a hospital in Austin that was part of their insurance network.

In the end, Jeffrey was okay. He broke some facial bones around his eye, but they healed and his vision was fine. The family settled the co-payments for the emergency room but was surprised when they later received a separate bill for more than $700 from the emergency department doctor. 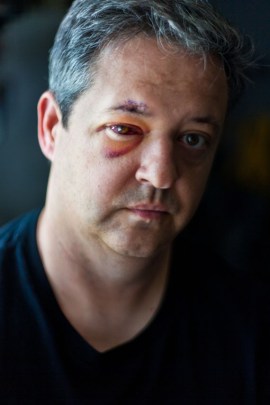 Last June, a baseball hit Jeffrey Craig Hopper, a Little League coach in Austin, Texas, in the eye. Hopper and his family were surprised that an out-of-network doctor treated him at an in-network hospital. (Photo by Jennifer Hopper)

“It felt kind of random,” Jennifer said. “How do I know who’s going to charge me, and who’s not going to? So that was the first question.”

Like many patients, the Hoppers assumed that doctors working at an in-network hospital would, of course, be “in network.”

As it turns out, that’s not necessarily true. Emergency room doctors, radiologists and anesthesiologists often don’t work for the hospital. They work for themselves, often in large practice groups, and it’s up to the doctors to sign their own deals with insurance companies.

Many of them don’t. In those situations, the doctors can bill the patient for whatever the insurance company wouldn’t cover  because the care took place outside of the approved network, a practice known as balance billing.

“I couldn’t let that go, it just felt wrong,” Jennifer said. “Because there was no way out. There was obviously no way we could have avoided the situation, given our emergency.”

Its report found that in over half of Humana’s Texas hospitals, none of the ER doctors was actually in Humana’s network. For United, this occurred at just under half of the hospitals and for Blue Cross, at about a fifth.

The Texas insurance industry has said it would like ER doctors to join their networks, but it can’t force them to.

The ER doctors counter that insurance companies often don’t pay them enough when they join networks.

The economics of ERs are complex, explained Dr. Bruce Moskow, president of the Texas College of Emergency Physicians.

“In an emergency department, we see everyone and we’re not even legally allowed to ask if they’re going to pay their bill,” Moskow said. “Large numbers of people pay nothing.”

There is a mediation process in Texas for some of these out-of-network bills, but it’s only for certain types of insurance and certain situations.

Some states have tried to tackle the problem in different ways. In California, ER doctors can’t send a separate bill to HMO patients. In New York, a newly-passed law requires out-of-network doctors and insurers to hash out payment on their own, and leave patients out of it.

Texas insurers have indicated they’d be receptive to more changes, such as expanding the mediation process. It’s currently restricted to balance bills over $1,000 and certain types of PPOs.

“Just get the consumer out of it,” said Jamie Dudensing, the CEO of The Texas Association of Health Plans. “If you just leave it between the health plan and the physician, the consumer’s not dealing with this issue. Let us work this out through the private market.”

Jennifer Hopper said she spent weeks appealing the physician’s bill, going back and forth between the doctor and the insurance carrier. Eventually she filed a complaint with state regulators. After that, her insurer ended up paying part of the physician’s bill.

People are typically advised to do their “homework” ahead of time and know who’s in their network and who isn’t. But Pogue said that isn’t always possible, especially in an emergency.

“If you’re wheeled into the emergency room door, you can’t ask the emergency room physician who runs up to stabilize you ‘Are you in network or out-of-network?’” she said. “That physician needs to be concentrating at that point on giving you life-saving care, not rattling off the list of insurance companies that he or she contracts with.”

Hopper has tried to do her homework by figuring out where to go for a possible future ER visit. Online, she searched her health plan to find ER doctors who were in-network. But she found less than five at the hospitals her plan used in Austin. She doubts the odds of getting those doctors the next time she or a family member needs care.

“So the reality is, all the transparency in the world doesn’t change the fact that knowing everything, I could not be sure I would get a different outcome,” she said.