CLEARWATER, Fla. – Inch by inch, two doctors working side by side in an operating room guide a long narrow tube through a patient’s femoral artery, from his groin into his beating heart. They often look intently, not down at the 81-year-old patient, but up at a 60-inch monitor above him that’s streaming pictures of his heart made from X-rays and sound waves.

The big moment comes 40 minutes into the procedure at Morton Plant Hospital. Dr. Joshua Rovin unfurls from the catheter a metal stent containing a new aortic valve that is made partly out of a pig’s heart and expands to the width of a quarter outside the catheter. The monitor shows it fits well over the old one. Blood flow is normal again.  “This is pretty glorious,” Rovin said.

The surgeon has performed one of the fastest-growing procedures in U.S. heart care known as a transcatheter aortic valve replacement, or TAVR. The operation was approved in the U.S. in late 2011 to help patients too ill or frail for traditional “open-heart” valve surgery. The procedure has rapidly gained doctors’ acceptance, particularly for patients in their 80s and 90s.

For hospitals like Morton Plant, the new valve technology comes at a fortuitous time – just as they confront rapidly falling demand for one of their most lucrative heart procedures, coronary artery bypass surgery. That has been used for more than 40 years to restore blood flow around blocked arteries, but less invasive treatments such as angioplasty have gained favor.

The opposing trends – fewer bypasses, more valve surgeries – demonstrate the hospital industry’s record of finding new ways to fill beds and increase revenue even as advances in health and technology shrink demand for inpatient care.  “Hospitals are like investment bankers, they are always looking for the next big deal and in this regard the next big deal is valve surgery,” said Gerard Anderson, director of the Johns Hopkins University Center for Hospital Finance and Management.

Valve surgery has risen more than 50% since 2012; the annual totals bolstered partly by more TAVR procedures, according to estimates from Frost & Sullivan, a consulting firm. About 16,000 TAVRs were done last year and hospitals are on pace to perform at least 20,000 in 2015, according to a national TAVR registry kept by two major medical groups.

But as with other new medical technology, TAVR draws concerns about possible overuse or adoption by hospitals lacking proficiency, which could harm patients and increase health care costs.

Dr. Verdi DiSesa, chief operating officer at Temple University Health System, said he worries too many hospitals are racing to perform TAVR before science has determined its best use. 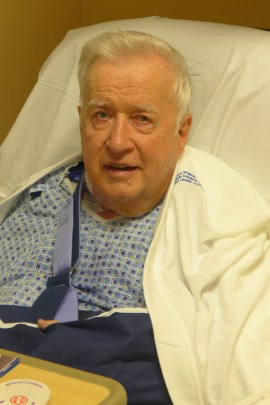 About 1.5 million people in the U.S. have aortic stenosis, the narrowing of the aortic heart valve, which obstructs blood flow from the heart to the rest of the body. About 500,000 have severe aortic stenosis, which restricts daily activities such as walking and climbing stairs. Without a new valve, half of those die within two years, according to the Food and Drug Administration.

Yet, a third of patients with severe stenosis are too sick or frail for traditional valve surgery, which involves opening the chest and stopping the heart temporarily, a weeklong hospital stay and months of recovery. In contrast, TAVR requires only tiny incisions, patients can be discharged in two days and recovery usually takes two weeks. Early studies show TAVR’s two-year mortality rate is 32 percent compared to 50 percent for standard treatment combining drugs with a procedure using a balloon-tipped catheter to open the diseased valve.

Bob Howard, a retired intelligence officer at the Defense Department, is enthusiastic about his TAVR. He was the patient on the table the day Kaiser Health News observed his surgery at Morton Plant in August. Two days later, he returned to his Palm Harbor home north of Clearwater.

TAVR has brought new patients to hospitals like Morton Plant that are performing far fewer bypass surgeries than a decade ago.  Cardiac bypass began in the 1960s and ranked among the most expensive high volume procedures at major medical centers for decades. But after peaking around 2000, demand fell as studies showed many patients fared better with less-invasive angioplasty and stents that prop open narrowing arteries. Increased use of cholesterol-lowering medications also reduced demand.

Nationally, cardiac bypass operations declined more than a third from about 350,000 cases in 2003 to 219,000 in 2010, according to the latest available data from theAmerican Heart Association. The slide has continued, shows data from the Society of Thoracic Surgeons.

“Our focus is on what does the community need … and how do we position ourselves to offer the leading edge treatments,” said Hoce.

Rovin said the keys to TAVR success are choosing the right patients and intense teamwork among doctors, nurses and technicians in the operating room.

“When patients come back, they and their families are over the moon … This is a patient population that was underserved and I can’t tell you the amount of hugs, kisses and tears and outright joy from patients that feel they get their life back,” he said.