New Medicare guidance taking effect today aims to stop the federal government from paying millions of dollars to hospice organizations and drug insurance plans for the same prescriptions for seniors. But the changes may make it more difficult for dying patients to get some medications, senior advocates and hospice providers say. 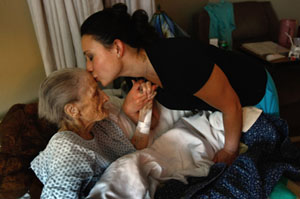 Nurse Rachel Haenel kisses terminally ill patient Jackie Beattie, 83, at the Hospice of Saint John in 2009 in Lakewood, Colorado. The non-profit hospice accepts patients regardless of their ability to pay, although most are covered by Medicare or Medicaid (Photo by John Moore/Getty Images).

The new measures direct insurers not to pay for any prescriptions for hospice patients until they receive confirmation that the drugs are not covered instead by the hospice provider.

Requiring additional authorization for these prescriptions will “prevent duplicate payments for drugs covered under the hospice benefit,” Medicare officials told hospice providers and insurers in a conference call three weeks ago.

Medicines for Medicare patients receiving hospice care generally are paid in two ways. Drugs related to palliative and comfort care are supposed to be covered under the fixed-rate federal payments to the hospice. Drugs for diabetes, heart disease or other chronic conditions still used by these patients but not directly related to their terminal illness are covered by Medicare Part D prescription drug plans, which are heavily subsidized by Medicare, with beneficiaries picking up roughly 25 percent of the bill.

Medicare officials said in the conference call the new measures are a response to a 2012 investigation that found Part D prescription drug plans paid more than $33 million in 2009 that should have probably been covered by the hospice benefit. That was for analgesic, anti-nausea, laxative and antianxiety drugs, as well as prescription drugs used to treat pulmonary problems and amyotrophic lateral sclerosis (ALS), also known as Lou Gehrig’s disease. Beneficiaries paid nearly $4 million in copayments, the report by the Department of Health and Human Services’ inspector general found.

Although the drugs are primarily used for palliative care and were prescribed to beneficiaries during the time they also received hospice care, drug plans did not know if those drugs should have been paid for instead by hospice groups, according to the report.

About 1.1 million Medicare beneficiaries received hospice care in 2009 and 437,121 filled prescriptions through their Medicare drug plan, according to the report.

Instead of leaving it to insurers and hospice providers to identify the drugs they are responsible for, the new rule sets up a process that requires Part D plans to reject initially any prescription from a hospice patient. The patient or doctor, with the hospice provider’s agreement, must explain to the insurer why the drug is not related to end-of-life care. The insurer may deny coverage for a number of reasons, including if the doctor or hospice did not explain sufficiently why the drug was unrelated to the terminal illness, Medicare officials told hospice organizations and insurers.

Several insurers that sell popular Medicare drug policies did not respond to requests for comment. But Clare Krusing, a spokeswoman for America’s Health Insurance Plans, an industry trade association, said, “Part D sponsors will continue to work with hospice providers to make sure patients understand the coordination of benefits under Part D and hospice when electing hospice care.”

In their announcement of the new process, Medicare officials conceded that in the past the government’s guidance “was ambiguous and there were no objective criteria for Part D sponsors to apply in making Part D versus [hospice] coverage and payment determinations.”

The new payment process, proposed in March and already in use in some areas, is causing some hospice patients or their families to leave their pharmacies empty handed.

“We had a couple of patients who went in to get their cardiac medications and were denied,” said Susan Strauss, a registered nurse and chief compliance officer at Hope Health Inc., in Hyannis, Mass., which provides hospice care for 300 patients.

“Denying people cardiac meds — or the medication they need to breathe easier — that they have had for 30 years and are unrelated to their hospice diagnosis is causing them more pain, more anxiety and puts them at greater risk for more emergency room visits and hospitalizations,” said Strauss.

If the Part D plan refuses to cover a prescription, hospice patients or their authorized representatives will need their doctor’s help in requesting an expedited appeal from Medicare to improve their chances of success, said Terry Berthelot, a senior attorney at the Center for Medicare Advocacy, which offers more details on its website. If the doctor says the patient’s health is in immediate jeopardy, a decision is supposed to be made within 24 hours. If that fails, patients can work their way through Medicare’s appeals process, she said.

Medicare officials declined to comment about the measures but are expected to provide more details when they announce next year’s hospice payment rates, probably in the coming days.