Buying health care in America is like shopping blindfolded at Macy’s and getting the bill months after you leave the store, economist Uwe Reinhardt likes to say.

A tool that went online Wednesday is supposed to give patients a small peek at the products and prices before they open their wallets.

Got a sore knee? Having a baby? Need a primary-care doctor? Shopping for an MRI scan?

Guroo.com shows the average local cost for 70 common diagnoses and medical tests in most states. That’s the real cost — not “charges” that often get marked down — based on a giant database of what insurance companies actually pay. 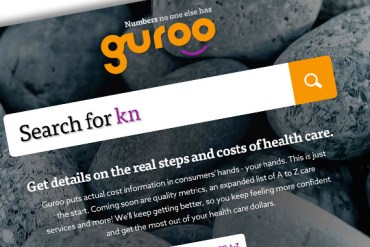 OK, this isn’t like Priceline.com for knee replacements. What Guroo hopes to do for consumers is limited so far.

It won’t reflect costs for particular hospitals or doctors, although officials say that’s coming for some. And it doesn’t have much to say initially about the quality of care.

“This has the potential to be a game-changer,” said Katherine Hempstead, who analyzes health insurance for the Robert Wood Johnson Foundation. “It’s good for uninsured people. It’s good for people with high deductibles. It’s good for any person that’s kind of wondering: If I go to see the doctor for such-and-such, what might happen next?”

Guroo is produced by the Health Care Cost Institute (HCCI) working with three big insurance companies: UnitedHealthcare, Aetna and Humana, soon to be joined by a fourth, Assurant. The idea is to eventually let members of these plans use a companion site to see how differing provider prices affect their co-payments.

A nonprofit known for its cost and utilization reports, HCCI receives some industry funding but is governed by an independent board. This is its first tool for consumers.

Consumer advocates praised Guroo but cautioned that the movement toward “transparency” in medical prices is still in its very early stages. Data on insurer, employer or government Web sites are often limited or inaccurate. Consumer information from Fair Health, which manages another huge commercial insurance database, is organized by procedure code.

Even on Guroo, “the average user may not have a good sense of what they’re looking at and what they’re supposed to do with the resulting price,” said Lynn Quincy, a health care specialist at Consumers Union.

HCCI says its prices are what insurers pay for about 70 tests and “bundles” of services described in understandable terms so patients don’t need a medical textbook to figure out what they are. Users get the average as well as a range for local and national prices.

It plans to add more procedures later — all for “shoppable” services that can be scheduled, not emergency treatment of a heart attack.

“This at least arms consumers with information about the range of prices in their community [for] one of these care bundles,” said David Newman, HCCI’s executive director.

If you have a high deductible, for example, you might use Guroo as a starting point for checking prices from medical providers if your insurance company doesn’t provide such a tool.

That’s not the same as seeing provider-specific prices online, of course. But within a year, HCCI expects to let members of UnitedHealthcare, Aetna, Assurant and Humana track spending on a companion site and check how switching caregivers could lower their out-of-pocket costs.

Initially Guroo doesn’t have much information about quality of care, either, which is essential to help patients to make smart choices. Newman says that is coming, too. It’s also missing information for Alabama, Michigan and several other states.

BlueCross BlueShield of North Carolina set a high standard for disclosure recently by posting prices — doctor by doctor and hospital by hospital — based on its reimbursement rates, Quincy said. Guroo doesn’t do that.

Given its size, influence and openness, Guroo could become a dominant portal for health care prices, said Hempstead.