If it seemed like 2011 was a big year for laws restricting abortion, it was.

In fact, according to “Who Decides? The Status of Women’s Reproductive Rights In the U.S.,” the 21stannual report compiled by the abortion-rights group NARAL Pro-Choice America, the 69 laws enacted restricting a woman’s reproductive rights were just one short of the record set in 1999.

“The bottom line here is that elections matter,” said NARAL President and CEO Nancy Keenan. “When you have a change of anti-choice politicians sitting in the statehouse, it affects women’s’ lives.” 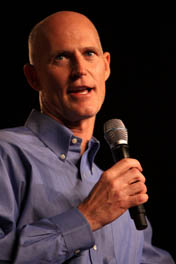 In fact, the dramatic increase in laws restricting abortion and other reproductive health matters shouldn’t have come as much of a surprise given the results of the 2010 elections, noted NARAL Policy Director Donna Crane.

The states that passed the largest number of abortion restrictions in 2011 all got new, anti-abortion GOP governors in 2009 or 2010: Florida, Arizona and Kansas.

Interestingly, however, those states don’t match the list of the top “pro-life” states as ranked today by the anti-abortion group Americans United for Life. AUL, which ranked states not just according to anti-abortion legislation but also issues including euthanasia, cloning and stem-cell research, put Louisiana, Oklahoma, and Pennsylvania at the top of its list. Bringing up the rear were Hawaii, California and Washington.

1. Mandatory ultrasound laws. These laws, now passed by eight states, require a physician to perform an ultrasound on a pregnant women before performing an abortion, even if it is not medically indicated and the woman does not request it.

2. Abortion insurance coverage bans. These laws, now passed by 16 states, ban abortion coverage by private health insurers. Some apply to all health insurers in a state, some to the new health “exchanges” that will be created by the Affordable Care Act.

3. Nebraska copycat bans. In 2010, Nebraska banned most abortions after 20 weeks gestation, on the contested theory that it marks the point in pregnancy when a fetus can feel pain. So far at least five more states — Idaho, Indiana, Kansas, Oklahoma, and Alabama — have joined Nebraska in enacting similar laws.

4. Race and sex selection laws. These are laws that make it a crime for physicians to fail to ensure that abortions are not being done purely for race or gender selection reasons. Arizona passed such a law in March 2011, joining three other states that had older laws already on the books.

5. Affiliation bans. These laws seek to bar abortion providers (often, but not exclusively Planned Parenthood) from receiving state funds for family planning or other services. Three states passed new laws in 2011, bringing to 11 the number of states with such laws in place, although four are currently being blocked by court order.

And action is already heating up for 2012, say both sides. Several states are looking at “personhood” ballot amendments, which define life as beginning at fertilization. Such laws would not only ban all abortions with no exception, but also many forms of birth control.

Meanwhile, the Ohio Senate is expected to move early this year on a bill to ban abortion at the point the fetal heartbeat can be detected – about eight weeks into pregnancy. The bill passed the Ohio House last year.

That bill “would outlaw abortion at a point in pregnancy when most women aren’t even aware they’re pregnant,” said Kellie Copeland, executive director of NARAL Pro-Choice Ohio. It would almost certainly prompt a challenge to the Supreme Court’s landmark Roe v. Wade decision legalizing abortion.

Finally, Washington state’s legislature is considering a bill that would move their state in the other direction. The “Reproductive Parity Act,” which had its first hearing Thursday, would would require private and public insurers that provide maternity coverage to also cover abortion services.