Last weekend, Rob Cuillo had a severe stomach bug, and he began thinking it might be time for a trip to the emergency room near his home on Long Island.

“I was sick as a dog,” he said. “I was so dehydrated, I was thinking if this goes on another day I might need an I.V. to give me some liquids.”

But then he remembered he hadn’t received his insurance card from Empire Blue Cross. He had enrolled in the plan through the New York State of Health, the state exchange for purchasing coverage under the Affordable Care Act. 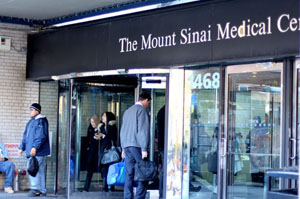 Enrollees need to look at which hospitals are in-network with which plans. Mt Sinai Hospital is out-of-network for Empire Blue Cross Blue Shield on the New York State health exchange. (Fred Mogul//WNYC)

People have been complaining for months — on Facebook and Twitter and elsewhere — about New York’s state insurance exchange. The problems have been similar to those nationwide: crashing web pages, long wait times on phone lines, customer service representatives who promise to help and then don’t deliver.

But in recent weeks, most companies in New York appear to be processing enrollments more smoothly, and now complaints are centered almost exclusively on Empire Blue Cross.

In an email, an Empire Blue Cross spokeswoman said the complaints could be due to an “overwhelming and unanticipated” number of applications, and that the high number of them in New York was because Empire is the state’s biggest player. Neither Empire nor state officials would discuss the underlying technical problems — or disclose how many people have been affected. Donna Frescatore is the head of the New York State of Health marketplace.

“I don’t have a ballpark number, but I certainly think it’s enough. We’ve heard it enough times to know that it needs immediate action,” Frescatore said, while also acknowledging the problems date back at least to November.

A couple days after his stomach virus ran its course, Cuillo got a letter in the mail, telling him the premium and how to pay it online. But the website wouldn’t open.

“I can mail it in to them, but I feel a little uncomfortable sending a check in the mail to people who don’t answer the phone,” Cuillo said. “How do I know it’ll even get there?”

Elizabeth Benjamin is from the Community Service Society, one of many private organizations around the state helping people enroll.

“I think we were all surprised that New York’s blue-ribbon carrier is the carrier that’s had, apparently, the most bumpy of roll-outs,” Benjamin said. “I think a lot of folks enrolled in Empire because of its incredible reputation, and everyone’s a little flummoxed about why these problems are occurring.”

Empire spokeswoman Sally Kweskin said in her email that the company is adding phone operators, expanding business hours and mailing out letters to customers telling them they will receive invoices and ID cards as soon as possible.

Frescatore says Empire customers will get extra time to pay their first bill.

“If an individual applied by the December 24th due date, and they pay their premium within 10 days of receiving their invoice, their coverage is retroactive to January 1st,” she said.

But some customers have said that’s too little too late.

Hayden was an Empire policy holder for many years and gravitated toward it again when he went on the exchange to purchase new coverage. He then spent more than six weeks trying to confirm he and his partner were enrolled with Empire, before giving up and going with a cheaper rival plan.

People have until the end of March to sign up for 2014 coverage.

This story is part of a partnership that includes NPR, WNYC and Kaiser Health News.