New York’s health insurance marketplace has been running relatively smoothly, compared with healthcare.gov, the site the federal government is running for 36 states.

But that’s a low bar, and even though about 50,000 New Yorkers had signed up in the first two months, almost every day still brings complaints and glitches. Donna Frescatore, the head of the New York State Of Health, says there are no serious patterns of trouble, just individual issues that the state and its contractors address one by one.

“We try to listen to everything — to social media, to customer service, to our navigators — and work every day to make it better,” Frescatore says.

Health insurance exchanges are in the middle of their version of the holiday shopping crunch. Millions of Americans who want coverage in place for the start of 2014 have to buy it by Dec. 23. At the nerve center of New York state’s exchange in Albany, staffers hope not to repeat the chaos of early October when the website launched.

The call center for the New York state marketplace, operated by a contractor called Maximus, is located in an office park on the edge of the state capital, Albany. Joey Cappuccitti is one of more than a hundred customer service specialists taking calls. He specializes in helping small businesses, and he says things have calmed down since the exchange debuted. 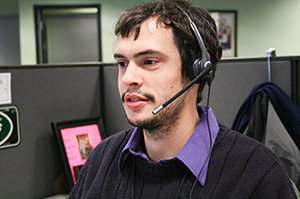 Joey Cappuccitti is one of more than a hundred customer service specialists taking calls at the New York State of Health call center near Albany, N.Y. (Photo by Fred Mogul/WNYC)

On launch day, Oct. 1, top state health officials gathered several miles away, in a small windowless conference room at the main computer hub in a converted shopping mall. Contractor Chris Harmer remembers that, based on months of passing stress tests, everyone was confident the system could handle what was coming. But that day the site was overwhelmed by the traffic. “That was a spike no one could’ve planned for,” said Harmer, a project manager from Computer Sciences Corporation, which largely operates the state exchange. “It was a load beyond any reasonable modeling, given the population of the state.”

But many customers couldn’t get past the home page, and many of those who did get through only got a screen or two into the application process before it froze.

The state realized they had to do two things. First, they tackled the technical problems. They expanded the servers immediately and went to work revamping the website. Frescatore, the exchange chief, recalls that the online application initially required people to check a box early, on the top of one of the Web pages, if they wanted financial assistance, but people didn’t see it.

So, Web designers eliminated the check box and made that fork in the road much more clear-cut for applicants.

The bigger, more abstract challenge is trying to adjust people’s expectations – not over how quickly Web pages should open, but over what it means to shop for subsidized, government-brokered health insurance online.

On Oct. 1, President Barack Obama said, “You can compare insurance plans side-by-side, the same way you’d shop for a plane ticket on Kayak or a TV on Amazon.”

It’s a message state and federal officials have been promoting for years, since the health law passed in 2010 – much to the chagrin of contractor Harmer.

“I don’t think it’s the correct analogy for a marketplace,” Harmer said.

The complexity of the Affordable Care Act means the whole application process is complicated, too. It’s a little like applying for financial aid for college: You have to put in a lot of personal financial informationbefore you figure out how much you’ll have to pay.

“It does depend on the household, the ages,” says Harmer. “It depends on all these factors, instead of just saying, ‘Here’s a quote,’ which may or may not be correct.”

Despite improvements, most days bring new complaints to the exchange’s Facebook page, where Maryann Manelski, a New York City-based filmmaker and writer, wrote: “I’ve spent over 6 hours trying to navigate the site only to get spinning rainbow wheels and the site not responding.”

At the New York State of Health, traffic has been steadily increasing over the past two months. And as with retail stores at this time of year, the call center has been increasing staff – by 10-to-15 percent – to meet the growing demand. Officials say they’re confident the system can handle a rush of insurance purchasers before the Dec. 23 deadline.