This report is part of a project on post-9/11 veterans in America produced by the Carnegie-Knight News21 program.

At least one in five female veterans of the wars in Iraq and Afghanistan has screened positive for military sexual trauma (MST) once back home, Department of Veterans Affairs records show. And this may understate the crisis, experts say, because this number only counts women who go to the VA for help. 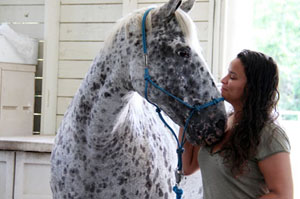 Jessie de Leon, 30, stands with a horse inside the stable at the Healing Horse Therapy Center in Loxahatchee, Fla., on June 29, 2013. De Leon was sexually assaulted while deployed as a combat medic in Bamburg, Germany by a fellow servicemember. (Photo by Kelsey Hightower/News21)

Young female veterans — those returning from the wars in Iraq and Afghanistan — often don’t show up for their first VA appointments, if they show up at all, said Ann LeFevre, MST coordinator at the VA Palo Alto Health Care System in California. “They think they’re alone and they don’t want to talk about it,” LeFevre said. “Especially with new returners, it takes a lot to get them on the VA campus. It can remind them of their base where the assault occurred.”

The assault itself defies the discipline and values of the armed forces, but the problem is exacerbated, experts say, when victims report an assault and their allegations are met with skepticism and possible retaliation.

Even after their military service is over, many sexual assault victims are reluctant to approach the VA, a system intertwined with the military and perceived at times as prescribing drugs instead of meeting their treatment needs.

“There’s a disconnect between what survivors believe they need and the educated treatment community as to what is necessary and helpful,” said Mylea Charvat, a fellow in clinical neuroscience with the Stanford School of Medicine.

Charvat, who worked in the VA system for about 10 years, starting shortly after 9/11, described the department as “slow to respond” to the broad needs of women. “Historically, it’s not a highly responsive system. It’s huge, it’s bureaucratic,” she said. “I can understand women being hesitant to seek care, and frankly, a lot of men, too.”

In 2012, the Department of Defense’s Sexual Assault Prevention and Response Office estimated that 26,000 cases of “unwanted sexual contact” occurred. Of these, only about 13 percent of service members reported their assault. 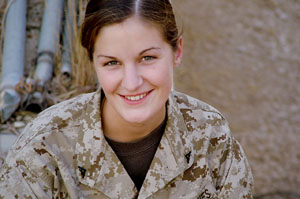 Former Marine Corey Barrows sits on the roof of a building in Iraq in August 2007. Barrows, who joined the U.S. Marine Corps in 2005, was raped off-post by a fellow servicememeber in September 2006. (Photo courtesy Corey Barrows)

Now, Charvat is working to develop a new model for effectively treating military sexual trauma and the resulting post-traumatic stress disorder with the Artemis Rising Invisible War Recovery Program, a treatment program inspired by the documentary “The Invisible War.”

“We need to attack this on a multi-faceted approach,” she said. “It’s a complex problem.”

The burden of the problem falls on the Department of Defense — which consistently states it has a zero-tolerance policy for sexual assault — and on the VA — which has been charged since 1992 with addressing the failures of that policy. In 2010, the VA spent $872 million on sexual-assault-related health care, records show.

But many veterans feel lost in the void between these two large bureaucracies.

Women like Jessie de Leon and Corey Barrows are veterans who feel the military failed them — not only because the assaults occurred, but also because of what they consider inadequate responses once they returned from their deployments. As a result, they sought their own means of treatment.

“For a while it’s just like I was numb to the world. Just fake happiness, drug-induced happiness,” said de Leon, who was raped while serving as an Army medic in Bamberg, Germany, from 2007 to 2009. “I didn’t realize that this process was going to be more hindering to me in trying to recover from it than it was helping me.”

As a medic, she examined soldiers and their families at the health clinic in Germany and prepared soldiers to be deployed to Iraq and Afghanistan. She also comforted families who lost soldiers in the war.

But back home in Florida, de Leon found no comfort with therapists at the West Palm Beach VA. They didn’t seem to understand the impact of her rape. Their recommended treatment consisted of prescription drugs for sleeping, anxiety and depression.

Harvard psychologist Paula Caplan has talked with hundreds of veterans, many of whom told her the VA pushed prescription drugs instead of examining the impact of the assaults.

“Women already, so often, feel that they don’t belong in the military, either they’re not wanted or they have to prove to other people or themselves that they deserve to be there,” Caplan said. “When you are traumatized and you’re devastated . . . then you think, ‘But I have military training, I’m supposed to be tough, I’m supposed to be resilient.'”

De Leon had a young son, she was going to nursing school and she decided to leave the VA. Eventually, de Leon ended up at Healing Horse Therapy Center with other female veterans, located in Loxahatchee, Fla., 15 minutes from her home.

“No one was forcing you to talk, nobody was saying you had to do anything,” de Leon said of the therapy center. “I didn’t realize you could gain so much confidence, gain so much self-motivation, get back your self-esteem, just by working with a horse, who never said a word to you.”

In October, she will graduate from nursing school and she and her 5-year-old son will move to North Carolina to be with her fiance.

“From going through years of a lot of people not caring about what you went through and how you felt about things, and to finally come to a place where you felt safe, it was, it was very wonderful,” she said. “It validates your pain.”

Veterans can seek a disability compensation rating for MST and the related effects. According to the VA, the necessary documentation has been reduced. Despite this, Amanda Schroeder, a union president for employees of the Veterans Benefits Administration in Portland, Ore., said MST claims are complicated and time-consuming to complete because many people do not report their assault.

“Men and women alike are already completely disabused, disempowered and often completely disenfranchised by the time they get to us and so a lot of times the sexual trauma cases take a lot of time because we have to seek so much additional evidence and it’s not all maintained in one place,” Schroeder said.

Because of this, Rep. Chellie Pingree, D-Maine, introduced the 2013 Ruth Moore Act, which aims to make it easier for service members to receive benefits for military-related sexual assaults.

“Most people are just shocked to think that we would ask someone to serve in the military and they would be more likely to be sexually assaulted than blown up by an IED (improvised explosive device),” she said.

Pingree said her bill, which passed the House and is pending in the Senate, is needed because of the difficulty she’s seen when victims try to prove they were sexual assaulted. “You can’t just say to someone, ‘Come serve your country, and oh, by the way, you might get raped if you do and we’re not going to do anything about it,'” Pingree said. “It’s just unthinkable.”

In January, Army Gen. Martin Dempsey, the chairman of the Joint Chiefs of Staff, said he believes sexual assault and harassment continue “because we’ve had separate classes of military personnel.” Identifying men as “warriors” and women as “something else” breeds an environment that can lead to sexual crimes, he said.

A 2013 Institute of Medicine report found a link between MST and long-term poor mental and physical health. Moreover, the Independent Budget, a policy evaluation created by various veteran service organizations about, but independent of, the VA, found that women with MST had a 59 percent higher risk for mental health problems.

Common conditions linked to MST range from PTSD and anxiety to eating disorders, hypervigilance and insomnia. More specifically, LaFevre said the women she works with often show signs of stomach problems, experience weight gain — “They don’t want to get attention from men in any way, so they emotionally eat” — and have a hard time maintaining a job, leading to homelessness. The Independent Budget reported that of homeless female veterans using VA health care, 39 percent screened positive for MST.

These side effects remain wide-ranging and lifelong and the resources for treatment vary across the country.

“The assault itself is very traumatizing,” said Jennifer Norris, an advocate with the Military Rape Crisis Center who was assaulted while serving with the Air Force and Air National Guard. “That trauma, you’re going to have it no matter what, for the rest of your life.”

Marine Corps veteran Corey Barrows was raped by a fellow service member while off-post in September 2006, near Marine Corps Air Station Cherry Point, N.C. When she reported her assault, her master sergeant told her she must have been too drunk — even though she doesn’t drink. “Nobody believed me,” she said.

She deployed in July 2007 to Iraq, where she was coping with her trauma — until her old unit, which included friends of her attacker, deployed to the same installation. Barrows, unable to manage the stress, took a handful of Percocet in an attempt to kill herself.

“We talk so much about unit cohesion being critically important in the military, just how well people work together when they’re serving, and it’s hard to imagine that anything does more damage to that than a sexual assault within a unit,” said Pingree, the congresswoman from Maine. “It’s not good policy to let it happen.”

Barrows was honorably discharged in November 2008. After enrolling in VA health care in early 2009, she was prescribed numerous medications for anxiety and depression. She then went to a civilian therapist because she had lost faith in the VA system. Her therapist suggested activities such as yoga and talking with other survivors to aid Barrows’s recovery. Barrows now uses fewer medications.

After her husband was discharged from the Marine Corps, they moved to his hometown of Bozeman, Mont.

“It’s just therapeutic out here. I’m out of the military bubble,” she said. “I still have horrible anxiety, especially with crowds, but in Montana you tend to have less of that.”