Ever been lost on a new trail on a hike? Or confused between north and south in a new city? Or after a certain age, unsure if you really took that anti-cholesterol pill last night, or was it the blood pressure pill?  They kind-of look the same.

GPS apps in your handheld may lead you back to the right path, but keeping track of your pills is another matter.  Only about 50 percent of patients take their medications as prescribed. And , according to the Centers for Disease Control and Prevention, in 2010 almost 40 percent of adults older than 65 were taking five or more prescriptions a day. 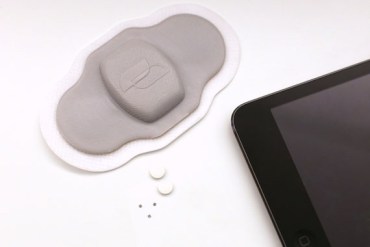 With families sometimes far away and many older people unable to afford personal caregivers, companies have searched for a technological solution to monitoring medicine.

Forget armband monitors like Fitbit, the newest body monitors are as tiny as BBs. These so-called nanomeds, miniscule sensors embedded in a placebo pill that you swallow, set up shop in your gut. As they slowly work their way through your system, these “ingestibles” – which are actually not digested – are switched on by contact with saliva and/or gastric juices. The signal is picked up by another sensor which looks like a Band-Aid and is worn on your chest.

This system records medicine intake as well as other measures, such as heart rate. The information shows up on your smartphone or tablet, via Bluetooth and can automatically go to your doctors, family members or caregivers, with your permission.

“We are entering the commercial era of the Internet of Things (IoT) – your car, your clothes and increasingly your personal care products are going to be connected,” says Andrew Thompson, CEO of Proteus Digital Health, which makes these “ingestibles.”

He adds that the goal is to connect major health systems to consumers “to allow them to switch on their own health care, creating critical information that can be used to ensure they and their doctors make positive decisions about use of medicines and personal health choices.”

Proteus was named after the submarine Proteus, in the 1966 sci-fi classic Fantastic Voyage.  A super-miniaturized sub and its a crew were injected into a blood vessel to fix a brain clot. And that was named after the Greek sea god Proteus, resulting in the adjective protean which has “has positive connotations of flexibility, versatility and adaptability.”

The Food and Drug Administration approved these devices in 2012, but they’re not on the open market yet. They’re still being tested in pilot projects, including with England’s National Health Service.

Proper use of powerful, sophisticated meds aimed at keeping the elderly active and out of institutional care, Bill Satariano of the UC Berkeley’s School of Public Health believes, will depend increasingly on these “indigestible chips.”

He says it’s part of the field of “techno-wayfinding” or relying on newer and newer information technologies to help us keep track of where we go, what we eat or drink and increasingly whether we’re following doctor’s orders in our pill consumption.

Satariano’s Berkeley colleague, David Lindeman, noted in a report published this year  that these and other forms of info-tech will play critical roles in what is broadly described as “connected health.” That relies on Internet-based technologies to help provide care in people’s homes or other non-clinical settings. “One dimension of these technologies is that they can be used to monitor individuals with chronic conditions to detect, and thus prevent, complications and crises that can lead to acute episodes. To maintain their health and well-being, it is just as important to provide individuals with automated health coaching, based on monitoring vital signs, activity, and behavior,” the report says.

For example, if an aging baby boomer has elevated blood sugar levels, her medical team can find out about it (information that comes into the boomer’s own cellphone and is then distributed to whomever she’s designated) and correct the problem before the levels get dangerous, even if she doesn’t even notice.

Separate monitoring devices are, however, just the beginning of indigestible medicine.  Coming soon, according to one senior executive at Proteus Digital, will be the implantation of these nearly invisible chips in the actual prescription pills themselves, relieving the patient of even having to remember to take the monitoring pill, because the pills could send back the message that they’re now in the system.

All these new “wayfinding” health technologies could improve both medication usage and effectiveness for elders aging at home, and helping them have a better quality of life. And, these could reduce or eliminate expensive critical care in hospitals.

All good, but some raise a possible dark side: is this the ultimate Orwellian Big Brother technology, like an electronic bracelet attached to your gut?

Satariano’s answer? “Without question. We always have to ask what is the cost to each technological advance.”

Research for this article was supported by a Journalists in Aging Fellowship, a collaboration of New American Media and the Gerontological Society of America, sponsored by the Silver Century Foundation.