Twenty-two years after Congress ordered the National Institutes of Health to include women in the clinical trials it funds to test medical treatments, women make up more than half the participants in those trials.

That’s the good news. Unfortunately, according to a new report from the Government Accountability Office, NIH can’t tell whether researchers are also examining outcomes by sex to see whether men and women are affected differently by what’s being tested.

That’s important because, for example, a drug or dosage appropriate for a man might be less effective or even lead to harm when taken by a woman.

But NIH does not make available usable information on which studies have separated results by sex and what those results are. NIH “does not maintain, analyze or report summary data to oversee whether analysis of outcomes by sex are planned or conducted,” the report found.

This is not the first time the GAO has criticized NIH for its implementation of the requirement to include women in research trials. In 2000, it said the agency needed to do a better job ensuring “that certain clinical trials be designed and carried out to permit valid analysis by sex.” Once again, NIH officials are promising to do better. The agency has 60 days to formally respond to the new report.

Meanwhile, those who fought to require parity in clinical trials have been left sputtering. 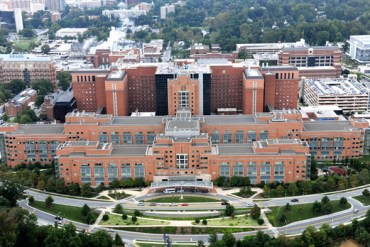 An aerial view of the Clinical Center, Building 10, at the National Institutes of Health campus in Bethesda, Md. (Photo by NIH via Flickr)

“It’s just very frustrating,” said former Rep. Patricia Schroeder of Colorado. “It reminds me of when you ask your children to move the clothes from the washer to the dryer. Then you go back and the clothes are still wet and they say, ‘Well you didn’t tell me to turn the dryer on.’”

Schroeder said she got interested in the subject in the early 1990s when studies came out showing that a daily aspirin could prevent heart attacks — and when she learned that all the test subjects had been men. “They didn’t even use female rats,” she said.

In fact, under 1977 guidelines from the Food and Drug Administration that were not changed until 1993, women of childbearing age were not even allowed to participate in drug trials, largely in response to serious birth defects that arose after drugs like thalidomide and DES were used by women.

Pushed by a group of women members of Congress, including Schroeder, the requirement to include women in clinical trials was written into law as part of a 1993 NIH bill signed by President Bill Clinton.

But even as more women are being included in clinical trials, there is growing scientific evidence of just how biologically different men and women are, and how differently they sometimes react to drugs and other medical interventions.

“We’re finally able to include women well enough to understand that they express disease differently, that certain risk for disease was different and certain outcomes for disease were different,” said Paula Johnson, a professor at Harvard Medical School and head of the Connors Center for Women’s Health and Gender Biology at Brigham and Women’s Hospital in Boston.

Heart disease, Alzheimer’s and lung cancer are examples of how women and men are affected in different ways, she said. “But they’re just examples; these differences occur across all diseases where we’ve asked the question.”

Indeed, in 2013 the FDA lowered the recommended dose for the popular sleeping pill Ambien after it became clear that the drug took longer to leave women’s systems and could pose a danger the next morning.

Other research has shown that biological differences go to the most basic level.

“The truth of the matter is men and women are very different at the cellular level, at the molecular level, at the systemic level,” said Doris Taylor, director of regenerative medicine research at Texas Heart Institute.

Taylor, who has been studying the use of stem cells to treat heart disease, said that “we got very different results if you gave male cells or female cells.”

“If you’re mixing those results [from men and women], there will be more noise in the system,” Taylor said. “And you’re going to miss what you might otherwise see as an effect or lack of effect. That is the danger.”

Leaders at the NIH say they agree with the GAO’s recommendations and will try to do better. But, as usual in science, it’s complicated.

“It’s a problem because we don’t get to understand whether treatments work as well in women as they do in men, and when things are not reported separately by sex, we also don’t get to see whether there might be some indication of differences in toxicity or adverse events,” said Dr. Janine Clayton, head of the NIH Office of Research on Women’s Health.

One big problem, said Clayton, is the lack of information on differences by sex reported in leading medical journals. Of the large clinical trials described in journals, she said, “fewer than one-third had any sex-specific information in the publication.”

But if those results are somehow made available, researchers could combine them together into what’s called a meta-analysis. “We’ve been trying to work with the journal editors for many years on this,” Clayton said.

Another problem is that NIH is not the only funder of medical research. Private industry, including pharmaceutical companies, pays for many — if not most — later-stage clinical studies. Privately funded studies also do not follow all NIH rules.

Meanwhile, in light of recent discoveries about biological differences by sex, Clayton says NIH is moving to require more basic, pre-clinical studies to use both male and female animals or cells, in an effort “to make sure that sex as a biological variable is accounted for in the design, analysis and reporting” of all research funded by the agency. That requirement takes effect in January.

Clayton, however, said she cannot discuss exactly what the agency will do to ensure better reporting by sex of the results of later trials involving humans. She said that will be included in the agency’s formal response to the GAO report.