Wilhelmina Delco learned to swim at 80. Harold Berman is in his 67th year practicing law. Mildred Walston spent 76 years on the job at a candy company. And brothers Joe and Warren Barger are finding new spots in their respective homes for the gold medals they’ve just earned in track-and-field events at the National Senior Games.

These octogenarians and nonagenarians may not be widely known outside their local communities, but just as their more famous peers — think Carl Reiner, Betty White, Dr. Ruth (Westheimer) or Tony Bennett — the thread that binds them is not the year on their birth certificate but the way they live.

“Age shouldn’t be a reason to slow down,” said Joe Barger, 91, of Austin, Texas.

It never hurts to have longevity in your genes and few chronic health problems, but mindset plays a role in how people age, experts say. Some older adults have been termed “superagers” for mental acuity despite their years because the typical age-related decline in brain volume is much slower.

However, for most active elders who aren’t among these elite agers, staying vital when others around you aren’t may be about more than physical or mental agility. Researchers find that society’s focus on youth culture and negative stereotypes about aging prompts older adults’ memory loss and stress. These days, older adults who want to dispel notions of growing feeble now have growing ranks to emulate.

Joe Barger and brother Warren, 95, of Chattanooga, Tenn., just wrapped up two weeks of competition in Birmingham, Ala., where Warren earned five gold medals and set a new national high-jump record in his 95-99 age bracket. In badminton, where Warren played singles, doubles and mixed doubles, he had to compete in the younger 85- to 89-year-old bracket because there weren’t competitors in his age group. 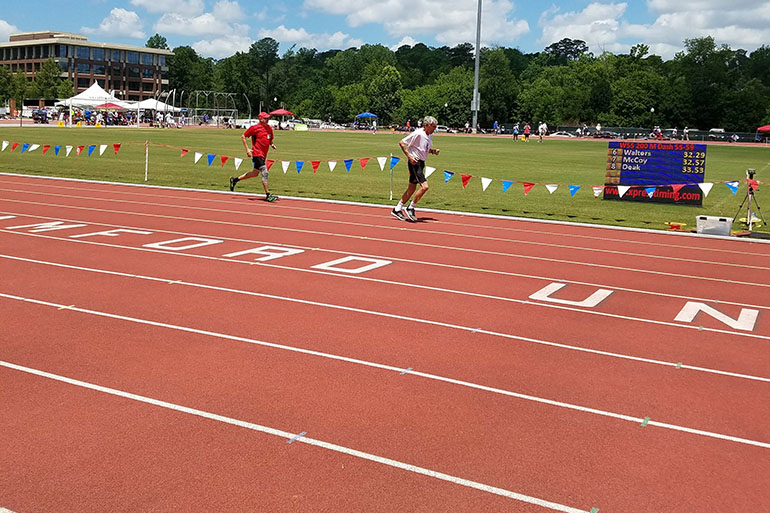 Joe Barger, 91, of Austin, Texas, runs the 1500-meter race at the National Senior Games in Birmingham, Ala. He won gold in that competition, as well as in the 800-meter and 5-kilometer distances in his age bracket (91-94). (Photo courtesy of Cindy Rosier)

“My secret of life is to wake up every morning with something to do,” Warren said. “Some people I feel are old because they allow themselves to get old. When people ask me how I’m able to do what I can do, I say I never did quit trying.”

A former insurance salesman and church music director, Warren plays golf and pickleball once a week and badminton twice a week. He mows his lawn, volunteers weekly at his church and sings in the senior choir.

In a study published last year, David Weiss, an assistant professor of sociomedical sciences and psychology at the Columbia Aging Center at Columbia University in New York, found that those who don’t fall for the inevitability of aging can “counteract the detrimental and self-fulfilling consequences of negative age stereotypes.”

“My research looks at why no one wants to be old,” Weiss said.

“They want to set themselves apart from this negatively viewed age group. They just want to distance themselves from stereotypes. ‘l’m not like the stereotype. I’m different,’ ” he said. “Adults who believe age is just a number showed better memory performance, but adults who believed aging is set in stone and fixed had a decrease in memory performance and a stronger stress reaction.”

Social psychologist Becca Levy of the Yale School of Public Health in New Haven, Conn., said her studies found an increase in negative age stereotypes over the past two centuries.

“Part of it is due to media and marketing,” she said. “An ageist culture produces many more negative stereotypes.”

Such notions do have an impact. Research by Sarah Barber, an assistant professor of psychology at San Francisco State University, published earlier this year found that people blamed “everyday forgetting” on their age as in a “senior moment” because popular wisdom reinforces stereotypes of age-related memory decline. The negative stereotypes about aging made older adults “over-attribute everyday memory losses we all have to age,” she said.

To stay vital, Westheimer advises older people to “do as many things that are enjoyable to them as possible — participating in activities at a senior center, going to the theater and movies and not just sitting home and saying ‘I’m too old to be out there.’ ”

The younger Barger, a retired mechanical engineer, lives by that creed. He competed in seven track events at the games and took gold in three, including the 800-meter, 1500-meter and 5-kilometer distances.

“I hate to see people slowing down when you know they can do more than what they’re doing,” he said. “Most friends I have are much younger than me.”

Reiner, the 95-year-old iconic writer, comedian, director and creator of the 1960s-era “The Dick Van Dyke Show,” is way too busy to slow down.  He and his longtime friend (since 1950) Mel Brooks, who turns 91 on Wednesday, have dinner at Reiner’s house  most evenings unless the comedic genius behind such classics as “Blazing Saddles” and “The Producers” is away on business, Reiner said in a phone interview from his Beverly Hills home. 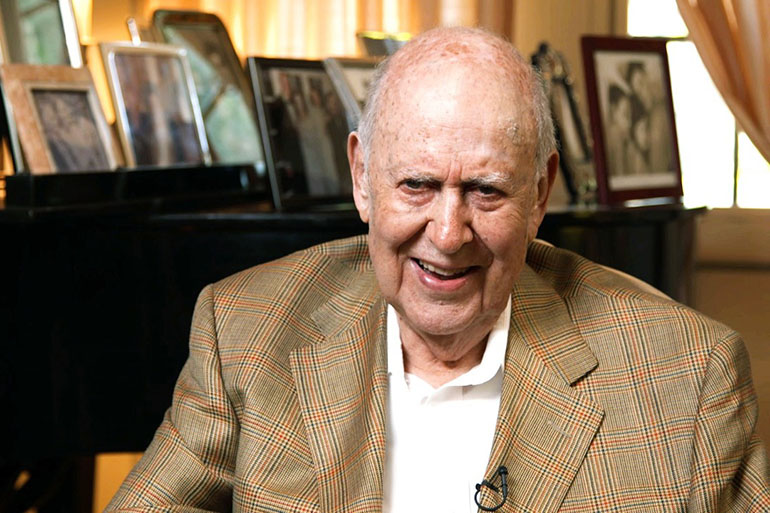 Reiner, 95, is the narrator of a documentary airing this month on HBO exploring why some people continue to blossom in their later years and others wither. (Photo courtesy of HBO)

Brooks is working on his one-man show in Las Vegas on June 30 and July 1 and is involved in the London staging of the Broadway version of his 1974 movie “Young Frankenstein” this fall.

Reiner’s latest book — his 22nd, “Too Busy to Die,” published June 1 — is one of five books he’s written since turning 90. He’s now working on two more books, expected out at Thanksgiving.

“Very, very often, I think of an idea and then I get up and put it on a pad,” he said, though he spends a good part of his day working at his computer.

Reiner also serves as a narrator in the new documentary “If You’re Not in the Obit, Eat Breakfast,” which airs on HBO throughout June. The film, which includes a bevy of the famous and not-so-famous in their 90s and beyond, aims to explore why some thrive and others don’t in their later years.

Westheimer, 89, a sex therapist who dishes out advice in a heavy German accent, also tweets, sometimes several times a day.

“I’m very busy. I’m teaching at Columbia. I’m coming out in 2018 with three new books. A movie is being made about me,” Westheimer said in a phone interview from her New York City apartment.

Westheimer is out six nights a week. She visits with friends and family — especially her grandchildren — and she serves on several boards.

Delco, who will be 88 next month, is trying to get a bit less involved with the half-dozen or so boards she’s been serving in Austin. Traffic congestion and travel time to attend board meetings have made this former state lawmaker (1974-94) less inclined to participate, she said.

Delco has been involved in public service since 1968, when she was elected to the school board.

“I still do a lot of public speaking,” she said. “I do not charge fees or anything like that, but the one thing they have to do if you want me to speak is come pick me up and take me home.”

Five days a week, Delco starts her mornings at the neighborhood Y, where her days of swimming laps ended because of arthritis. Now, she exercises with barbells in the pool to maintain strength and agility. 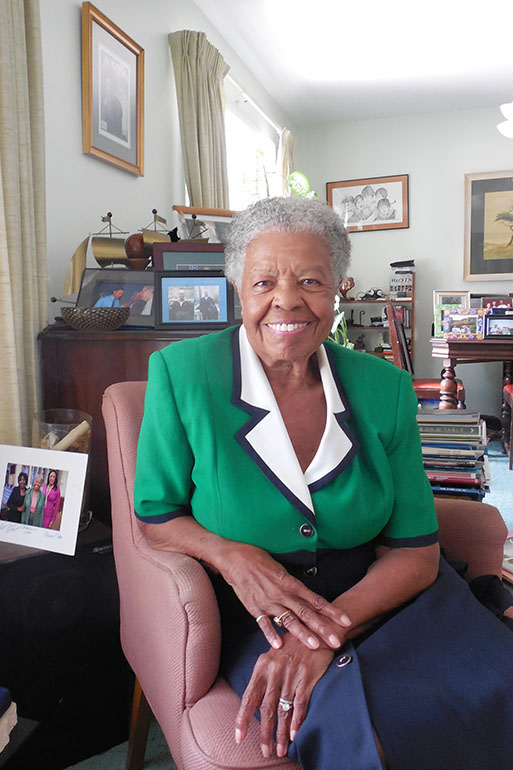 Walston, who turns 95 in September, has also turned her attention to exercise and staying fit.

“It seems to me like it’s boring to sit around if you don’t do anything,” she said. “Where I’m living, there’s something to do all the time. I’m signed up for everything I can.”

Walston worked at Lammes Candies, an Austin family-owned business that opened in 1885, since she graduated from high school in 1940.

“I wasn’t going to retire at all, but I lost my sight,” she said. “I woke up on June 8th of last year and I couldn’t see, so I couldn’t work anymore.”

Walston is legally blind but has enough sight to keep active.

Berman, 91, an attorney in Dallas, says he never thought about retiring.

“I made a pact with myself not to retire as long as I’m able to do it,” he said.

Berman, a World War II veteran who in May participated in an Honor Flight, is at the gym at 5:30 a.m. three days a week.

“I used to go five times a week,” he said. “I have breakfast with the guys after we exercise.”

Although Berman has been a leader in various national organizations and is active in some local organizations, he said he is traveling less and definitely working less.

‘No One Wants To Be Old’: How To Put The ‘Non-Age’ in Nonagenarian