Subsidies in the health law were designed to lower insurance costs for people who make around $11,000 to $46,000 a year. But for young people earning toward the higher end of that range, it’s more complicated than that. A new study shows that in major cities, some young people are falling into a gap where they make about $46,000 or under, but don’t actually qualify for government help to pay their insurance premiums.

And as the Affordable Care Act barrels toward its March 31 enrollment deadline, insurers need people age 18 to 34 to sign up.

Brian Loughnane, 26, was making $36,000 when he looked for a policy on healthcare.gov in December.

“There was something that said ‘You’re eligible for a subsidy,’ ” but then, he says, “after I put in the rest of my information, it said it was zero dollars.” 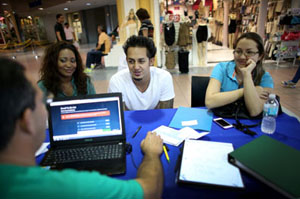 Young people were supposed to be able to afford health insurance under the health law to help make the system work, but some question if coverage for them is truly affordable (Photo by Joe Raedle/Getty Images).

That’s because subsidies kick in only when a baseline plan exceeds a certain percentage of a person’s income. The higher one’s income the more expensive premiums must be before subsidies kick in. It didn’t, in Loughnane’s case, and that’s the young person’s subsidy gap. Kev Coleman, with the health information technology company HealthPocket, recently looked at plans for young adults in eight major cities, and all of them had these subsidy gaps.

“What we found is that on average, once you were above $31,744 you probably were not going to qualify for a subsidy,” says Coleman.

This may mean there are enough low-cost insurance options being offered in those cities. But not necessarily. Coleman points out that depending on their age, income and city, premiums could be as much as $250 to $350 a month, and make up 9.5 percent of their income. Will young people perceive that as affordable?

“When you combine these results with the fact that young people under the age of 35 are statistically healthier, they probably place a lower priority on the need for health insurance – this may help explain why we’re seeing an underenrollment in the younger adults, verses the targets originally set by the administration,” Coleman says.

In Philadelphia, the region’s largest insurer doesn’t seem too worried.

“We’re looking to get as many people as insured as possible, [to] make sure they’re aware the deadline is coming,”  says Koleen Cavanaugh,  a director of marketing for Independence Blue Cross, one of two companies offering plans on Philadelphia’s exchange. She says more than 90,000 people in the region, across all ages, have joined plans since open enrollment started.

“Back in January if we looked at the numbers, we had about 21 percent enrollment in the millennial population, we’re now around 31 percent, so we’ve seen a nice uptick in February and March enrollment numbers,” Cavanaugh says, as she works in a tent near City Hall where agents are helping people sign up.

According to Cavanaugh, the majority of those young adults have been eligible for subsidies. An earlier government study found that about half of young adults nationwide are eligible for a basic plan that costs $50 a month or less. But that does not include Brian Loughnane, who was aging out of his parent’s plan. He works for a tech startup that doesn’t offer insurance. “I was a completely new entrant into the marketplace so I didn’t really have an idea of what I would be paying,” he says.

Loughnane found a mid-level silver plan at full cost for $205 a month. Analysts like Coleman, with HealthPocket, worry that might be too much for young people and keep them from signing up for coverage. For Loughnane, it’s worth it even though he’s healthy. He wants coverage, in part because he saw how important insurance was for his girlfriend.

“She had cancer and she beat it,” Loughnane says. “That’s a situation where without health insurance, you’re going to get into debt for the rest of your life.”

The $200 a month plan was easy sell: “That’s less than half of what I pay each month for groceries, I have other expenses too, but for my health I’m absolutely willing to pay that.”

This story is part of a reporting partnership among WHYY, NPR and Kaiser Health News.

Some Young People Won’t Get Tax Help for Obamacare Insurance