Updated Jan. 8 to eliminate incorrect information about a Medicare plan operated by Care Oregon which converted to non-profit status on Jan. 1. 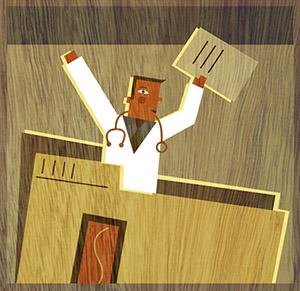 Last year, Jessie Trice got a $759,000 payout after Florida Blue, the state’s largest insurer, bought a minority ownership stake. Jessie Trice used part of that windfall to open a health center in suburban Miami and to convert an existing facility into a dental clinic.

As Florida shifts nearly all of its 3 million Medicaid recipients into private managed care plans this year, Prestige expects to triple its enrollment to more than 300,000 members. That could lead to more profits for Jessie Trice and the other health centers. Through Prestige, they are also less reliant on policies set by other insurers, and gain more control over how Medicaid funds are spent.

“If you have to ask for money from the bank … you might as well be the bank,” says William Baker, a health center consultant in Austin, Texas.

A number of community health centers have already formed nonprofit Medicaid health plans, including ones in California, Rhode Island and New York. Prestige is one of a handful of for-profit plans created by the centers, but more are looking at that business model as a result of two overlapping trends: the increasing number of people eligible for Medicaid under the federal health law and state decisions to shift enrollees into managed care plans.

Health center officials say owning health plans helps their patients in several ways: It gives centers a financial incentive to keep patients healthy and out of the hospital because the plan gets a fixed fee for their care. Officials say disputes over services or benefits are also resolved more easily. Finally, the centers have access to money which can be plowed back into care.

“We are trying to move up the food chain to get better in line for revenue,” says Salliann Alborn, CEO of Maryland Community Health System, a consortium of eight health centers that, in partnership with Johns Hopkins HealthCare LLC, runs for-profit Priority Partners, a plan with 215,000 members. Priority Partners made nearly a $12 million profit on $902 million in revenue in 2012, according to filings with the Maryland Insurance Department.

Integral Quality, a nonprofit plan owned by Health Care Network of Southwest Florida, a center in Immokalee, Fla., is considering becoming for-profit to enable it to expand into additional counties.

Michael Gervasi, CEO of Florida Community Health Centers, says being a partner in Prestige means his health centers can have a greater voice in treatment decisions and credentialing doctors. “It’s about swimming upstream and being able to play with the big boys,” he says.

“In many cases, health centers are concerned that other for-profit plans will reduce their reimbursements or make it harder for them to provide care,” she says.

The managed care strategy, based on receiving fixed monthly amounts per patient, also carries risks for health centers – they can lose money if treatment costs are higher than expected. Prestige, for example, made $2.8 million profit in 2010 on $97 million in revenue but lost $2.7 million in 2011 on $143 million in revenue. In 2012, it made a slight profit.

Prestige was formed after several Florida health centers combined to negotiate with Medicaid health plans, says Kevin Kearns, CEO of Prestige Health Choice. They decided to start their own plan as a way to retain some of the savings they incurred by becoming more efficient.

“The health centers wanted to retain the benefits, to put back into their communities,” Kearns says.

At Jessie Trice, CEO Annie Neasman says Prestige was “a leap of faith for us.”

She says her health center does not receive enough federal money to handle the growing demand of uninsured patients.  Health centers don’t turn patients away, although they charge those without coverage a sliding-scale fee.

“It was an opportunity for us to expand our revenue base,” Neasman says. A local health foundation helped the center come up with the money to invest in Prestige. About 1,300 patients, or 17 percent of Jessie Trice’s Medicaid patients, are enrolled in the plan.

“The Prestige plan … is better for the health center [financially],” Neasman says.

“The health centers don’t want to be dependent on any one payor and we don’t have a problem with that,” he says.