In historic downtown Pueblo, Colo., business is down at the Gold Dust Saloon, a kid-friendly place known for a hamburger smothered with chili called the “slopper.” Despite the tough financial times, the restaurant recently decided to help cooks and waiters buy health coverage for the first time in its 25-year history.

Joan “Joanie” Knight, a 56- year-old cook who had never had coverage, got her first mammogram and altered her diet after a physical showed high cholesterol. “It’s a good deal,” she says. The restaurant is one of 30 employers participating in a county program to provide low-cost coverage to employees of small businesses.

The approach is called “three share” because the $180 monthly premium is divvied up equally among the employer, the worker and the community. In Pueblo, two local hospitals pay the community portion. The effort is the kind of modest attempt financially strapped states and communities are pursuing to help the uninsured, even as Congress debates a sweeping overhaul of the nation’s health care system. Health care analysts say the initiatives show promise and help some people who otherwise wouldn’t be covered. Yet they also underscore the limits of small-bore programs.

“This is not the perfect solution,” says Elizabeth Lukanen, a senior fellow at the University of Minnesota who evaluates state aid for the uninsured. “But it’s what they can afford.”

The three-share approach, launched in Muskegon County, Mich., in 1999, has had some success building enrollment there and elsewhere in Minnesota and Illinois. The efforts typically only have targeted a small fraction of the uninsured, says Chris Adams, a Denver health care consultant.

Muskegon, a county of about 175,000 people on the shores of Lake Michigan, now has 1,100 participants. Yet enrollment stayed flat over the past two years even as unemployment and the numbers of uninsured have soared.

“This is no silver bullet, but the impact we have on people’s lives cannot be overstated,” said Jeff Fortenbacher, executive director of the Muskegon program. Duval County, Fla., which has 1 million people and surrounds Jacksonville, launched three- share in 2004.

It struggled from the start due to a lack of interest from employers and health providers, as well as strict eligibility rules to hold down costs. When it was shut down in 2008, it covered 1,500 people. Such efforts to help the uninsured could be overwhelmed by deep cuts in Medicaid, the state program for the poor and disabled, if the economy doesn’t improve.

Thirty states are considering Medicaid cuts, which could increase the uninsured by at least 1 million in the next year, says Families USA, a liberal advocacy group pushing Congress to pass the health overhaul. Kelly Dunkin, a vice president of the Colorado Health Foundation, which supported the Pueblo program, says communities understand three-share’s limits. 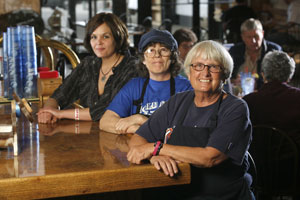 Gold Dust Saloon owner Ruth McDonald (right) uses an innovative “three share” model to provide health coverage for her workers. The restaurant is one of 30 employers in a Colorado program that provides low-cost coverage to small businesses. (Thomas Kimmell/KHN)

“But I think many communities feel helpless,” she says, “and with these programs, at least you are doing something.”

To keep costs down, the program has an annual maximum benefit of $30,000 and doesn’t cover transplants, kidney dialysis or care outside the county, which patients have to pay for themselves. Physicals, mammograms and immunizations are free, and a registered nurse gives advice on healthy living. To qualify, an employers’ workforce must have a median wage of $15 an hour or less. The employer cannot have offered health coverage in the previous year. So far, the program has attracted 100 workers, a sliver of the county’s 25,000 uninsured residents.

“It’s been slower than we anticipated,” says Holly Hanson, CEO of Health Access Pueblo. She says the recession hit just as the program started. Many employers were reluctant to spend money on workers’ benefits. Colorado is trying to boost enrollment this year by giving the Pueblo program $96,000 of its federal grant money to expand marketing.

The state also is using $65,000 of the grant to underwrite the community portion of a three-share program scheduled to start this spring in San Luis Valley, a mostly rural area 100 miles southwest of Pueblo. Many of the Gold Dust Saloon’s 15 employees got coverage through spouses and parents, but for others the program provides their first real chance for affordable access to medical care.

“I do feel better knowing I am covered,” says Lisa Conway, 31, a waitress who pays $60 a month for coverage. “Even though it’s not insurance, it works.” Before joining three-share, Conway went to the emergency room for medical care. Now she has her own doctor and has signed up for smoking cessation classes, which are covered.

Gold Dust owner Ruth McDonald, who pays $60 a month for each of her four employees in the program, says the extra expense is well worth it.

“My employees will be healthier and will be less likely to call in sick,” she says. “They’ll realize this is a benefit and will stay longer. And a more experienced employee provides better food service.”