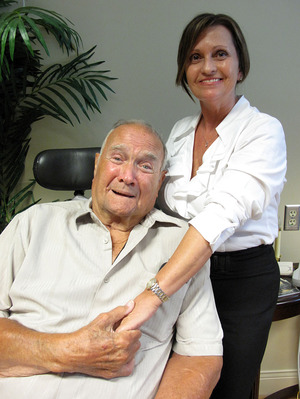 Jim and Cheryl Waggoner met and married while he was in a VA nursing home. Their custom home accommodates his physical limitations while also looking stylish. (Jennifer Ludden/NPR)

Last in a four-part series

As Americans live longer than ever, some will find it difficult to stay in their beloved homes: Steep stairs or a slippery shower can pose dangers, and standard houses are not wheelchair accessible. One solution? With 78 million baby boomers about to hit retirement age, some say the time is ripe to overhaul the way homes are designed.

He has lived in a Veterans Administration nursing home in Tampa, Fla., for 13 years, since cancer in his back and spine left him in a wheelchair. A lifelong bachelor, Waggoner figured he’d die in this institution. But then he hit it off with a nurse at the nearby VA hospital. Jim and Cheryl got married last year and wanted a cozy place to live.

“We had nothing to go on until we got our home,” Jim says.

“We had discussed just remodeling my place,” Cheryl says, “but there would have been too much to do. We would have had to have taken everything down, all the walls, the works.”

It’s a common problem – and an expensive one. Making a home accessible can cost tens of thousands of dollars. So Cheryl went online, and that’s where she discovered the kind of homes Keith Collins is building.

More From The NPR Series

Collins brings a personal passion to homebuilding. He spent time in a wheelchair after serving in Vietnam and sees overlap between the needs of injured veterans and the elderly. Florida, as it happens, has a lot of both. Collins explains that his company, New Millennial Homes, uses what’s called universal design.

“The design allows a person to remain independent and keep their dignity,” he says.

Collins tailored the Waggoners’ white ranch house to make life easier for them.

The mailbox is low enough for Jim to collect the mail in his wheelchair. There are no steps – just flat entries – and doorways are wide. All door handles are levers: Collins says a large share of seniors lose some dexterity, making it more difficult to turn traditional knobs.

In the kitchen, Collins points out the open space under the sink. That’s to allow someone to do dishes while sitting, either in a wheelchair or on a stool, for rest. Even the wood in the walls is tailored: 2-by-8s instead of 2-by-4s. That lets the builder pop in a grab bar without ripping out the wall – and that saves money. Collins is adamant about building for the middle class.

“If you do it right from the beginning,” he says, “it would normally cost you no more or very little compared in cost to any other conventional home.”

Collins is also proud that his homes look like any other. He says he loves it when people walk in and ask, “Where’s the handicapped house?” In fact, some of his features designed for accessibility are commonly found in glossy kitchen magazines: shelves that pull out like drawers, for example, and a faucet over the stove, to avoid having to lug a heavy pot of water from the sink. Aging experts say this crossover appeal is essential.

“We absolutely recognize that if these are pitched as they help you when you’re old, that’s a recipe for disaster,” says Elinor Ginzler of AARP.

She’d like to see boomers plan ahead and buy a home with universal design now or use it for that kitchen renovation. But here’s the problem: No one ever thinks they’ll need such accommodations.

“We have polled people to ask them about the whole concept of what is old,” Ginzler says. “And no matter what decade they are in, they believe that old is the next decade. And if you’re even in your 80s, old is in your 90s.” 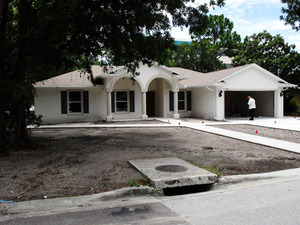 New Millennial Homes designed this ranch house for Jim and Cheryl Waggoner in Tampa Bay, Fla. Because its universal design features were planned at inception, the cost — $171,000 — is about the same as a traditional house. This photo captures the house in its final stage of construction earlier this summer. They have since moved in. (Jennifer Ludden/NPR)

So advocates – and builders like Keith Collins – are trying to broaden the appeal. Those flat entries and wide doors? They’re great for moms with strollers. Lever door handles? They’re so convenient if your arms are full of groceries.

New Millennial Homes designed this ranch house for Jim and Cheryl Waggoner in Tampa Bay, Fla. Because its universal design features were planned at inception, the cost — $171,000 — is about the same as a traditional house. This photo captures the house in its final stage of construction earlier this summer. They have since moved in.

New Millennial Homes designed this ranch house for Jim and Cheryl Waggoner in Tampa Bay, Fla. Because its universal design features were planned at inception, the cost — $171,000 — is about the same as a traditional house. This photo captures the house in its final stage of construction earlier this summer. They have since moved in.

Some communities aren’t leaving it to the marketplace. In recent years, dozens of states and localities have passed laws promoting aspects of universal design. In part, that’s because a lot of money is at stake. Medicaid and Medicare pay for a huge chunk of nursing home costs. AARP’s Ginzler says the fewer people that must move into nursing homes, the more public money these states and cities save.

For Jim Waggoner, moving out of a nursing home and into his own house, at last, simply means freedom. It gives him “the ability to do what I want, when I want and how I want – and not have somebody tell me that I can’t do that, or can’t do this,” he says.

Building Homes To Age In