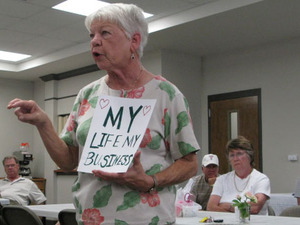 Marsha Trotter from Pike County, Ala., expresses her concerns to Alabama freshman Rep. Bobby Bright at a town hall meeting. The retired teacher said she fears that new health care plans would require her to meet with a government board to discuss end-of-life options. “Now that’s my life and my business, and I don’t want the government in it,” she said. (Debbie Elliott/NPR)

Freshman Congressman Bobby Bright (D-AL) is spending the August break navigating the lush green backcountry of his south Alabama district. He started Wednesday with a “meet and greet” at Sister’s Restaurant in Troy over a vegetable plate and fried cornbread.

“We have the best health care in the world. I have friends in Canada that have called me and said, ‘Don’t you dare go into this system because, you know, if I’ve got a prostate problem, I can’t even get to see my doctor in six months.’ I’m telling you, Mr. Congressman, don’t let it happen,” he said.

That’s been the message this week for Democrats all over the country. Some have been heckled and booed by unruly crowds. Some lawmakers are now having their town halls via telephone. And even Blue Dog Democrats who oppose the current legislation haven’t escaped the conservative wrath.

About 150 people crashed Alabama Democrat Parker Griffith’s news conference in Huntsville on Wednesday. They demanded to be heard.

“Are you afraid to have a town hall meeting?” asked one man. “No sir – I’m not afraid of anything,” Griffith replied and proceeded to answer questions for 90 minutes. He emphasized that he has been fighting House Speaker Nancy Pelosi’s agenda. 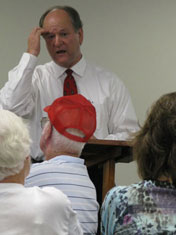 And he promised to do the same when it comes to health care. All three of the Democrats in Alabama’s congressional delegation – Griffith, Bright and Artur Davis (who is running for governor) – oppose the bills proposed in Congress.

Still, voters want to express their concerns. More than a hundred people waited to hear Bright at the town hall in Goshen, population 300.

Bright is the first Democrat to hold this House seat in more than four decades. But on many issues, he’s more in line with the Republican Party than with national Democrats. Abortion, for example:

“Whatever plan is out there – number one, I won’t support it if it supports abortion because I’m against abortion. That’s the way of life down here that we are used to. And being a Southern Baptist deacon, I feel that way very strongly,” Bright told the Goshen voters.

There was no heckling here. Just a room full of worried seniors.

“What I keep hearing is you will be required – required – to meet with a board to discuss your end-of -life options. Now that’s my life and my business, and I don’t want the government in it,” Marsha Trotter said.

Bright explained that that wasn’t in the bill and warned voters that special interests have been trying to distort the health care debate. “Who can we trust?” one man asked. It was a hard question to answer.

Democrats Get An Earful On Health Care