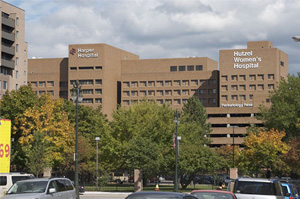 The U.S. auto industry may be showing some signs of life, but civic leaders in Detroit are looking to another sector to revive the Motor City: the health care industry.

A few weeks ago, officials with the Detroit Medical Center, the city’s largest health system, made an announcement that was as startling as it was welcome: that they intended to sell the nonprofit to an investor-owned company. As part of the deal, Nashville-based Vanguard Health Systems promised to spend $850 million on much-needed capital improvements. If the deal goes through, hospital officials say it will be the largest single investment in Detroit ever. For those who are charged with running the Detroit Medical Center and the city itself, the announcement couldn’t come soon enough.

In a city whose unemployment ranks as one of the worst in the country, the deal could bring as many as 10,000 new jobs.

The Lure Of The ‘Hilton’

In the emergency room of Sinai Grace Hospital, hospital president Conrad Mallett says patients probably have been waiting for a bed for at least three or four hours. Pointing to small curtains that separate them, he notes the lack of privacy.

If the deal with Vanguard is approved by state regulators, those curtains will soon be replaced by walls. The company has promised to spend more than $75 million on improvements at Sinai Grace.

The Detroit Medical Center, or the DMC as it’s called locally, is the city’s primary safety net, providing more uncompensated care than any other health system in the state. That commitment comes at a cost. While the DMC has turned a profit for six years in a row, officials say the health system’s payer mix makes raising money on Wall Street all but impossible. As a result, the facilities are showing their age, and potential patients like Amy Kuras look to DMC’s competitors for care.

Kuras is a freelance journalist who lives in the city of Detroit but chose to deliver her children at Beaumont Hospital, one of the DMC’s suburban competitors. Nurses call it the Hilton. There are flat-screen TVs, pull-out beds for fathers and plenty of privacy. This is what the DMC and its aging facilities are up against, and the goal is to lure insured patients like Kuras from miles around.

Kuras said that after she delivered her son, her parents looked at the room, she recalls, and they said, ” ‘Are you kidding me? You have this room all to yourself for the whole time you’re here? We’ve stayed in hotel rooms that weren’t this big or nice.’ ”

DMC officials say they even hope to take on hospitals like the Cleveland Clinic.

That vision is met though, with a healthy dose of skepticism by those who study such deals. Without selling hospitals, turning away needy patients or cutting services, experts say they don’t see how Vanguard will get a good return on its investment.

“Every hospital in the country wants to start one of these centers of excellence or bringing in foreign patients, and it’s a pretty tough business to succeed in,” says Jill Horwitz, a University of Michigan law professor who studies nonprofit and for-profit hospitals. “It’s unclear to me why this hospital would do better at it than its competitor hospitals.”

But that skepticism doesn’t dampen Detroit Mayor Dave Bing’s enthusiasm for this deal.

“We are elated, to say the least, that somebody from the outside looks at Detroit as a place where they can make an investment and get a return on the investment,” Bing said when the deal was announced. “I think it will send a message around the country that we as a city are open for business.”

There are signs of investment fever. Not long after the DMC made its announcement, rival Henry Ford Health System said it too would invest hundreds of millions of dollars in its campus here. The message? Medicine could possibly replace motors as the engine of Detroit.