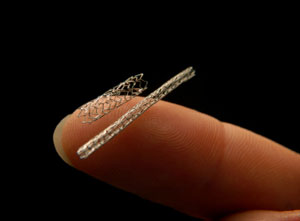 For all the attempts to lower the cost of health care in the United States, it remains expensive. Overall medical spending accounts for more than 17 percent of America’s entire economy.

As lawmakers look for ways to trim costs and extend insurance coverage to more people, one of their greatest challenges has been pulling apart the many layers of expense.

Their work is as intricate as that of cardiologist Dr. Paul Teirstein. On a recent day he stands in an operating room at Scripps Health in San Diego, looking down at a patient under light anesthesia. The patient lies half-conscious, with tubes coming out of her chest and beeping monitors keeping track of her vital signs. At least a dozen professionals shuffle around the room.

Teirstein holds up a single small piece of metal – it costs $2,000, and it’s destined for one of her arteries. He turns the overhead lights on to better show the stent. “They’re very small,” he says, “and very flexible.”

Teirstein turns his attention to a screen showing the patient’s arteries. They look like narrow, winding tree roots. Teirstein has to put this stent somewhere in there. He assesses the size of the problem and calls for a 23-millimeter stent. Someone repeats the order, then hands it to him. Teirstein threads it around a bend and up the clogged artery.

Teirstein pulls the stent back down out of the patient’s artery and tosses it aside. He calls for an 18-millimeter stent and starts over.

“It’s one of the advantages of having a lot of different stents in your cabinet,” he says, noting that he can try several sizes to find the best fit.

The Cost Of Precision

And what happens to the stent that didn’t look right? It goes back to the company, which throws it away.

Teirstein’s hospital has a special deal with the stent manufacturer – the hospital doesn’t have to pay for stents it doesn’t use. But from an economic perspective, trashing stents raises the price of all stents, because the manufacturer has to factor in that cost.

In this single operating room, doctors might go through a dozen stents in a day. The rolling metal shelves are stacked with boxes of stents, with what amounts to piles of money.

Teirstein is casual not just with stents but with all his tools. When a tiny wire that looks like it belongs in a piano annoys him during the procedure, he gets rid of it. The wire costs $50.

Then a catheter doesn’t sit right in an artery. He calls for another. “You really need a lot of tools to do this procedure,” Teirstein says. “They’re all kind of expensive. This catheter is probably about $60.” It’s just a piece of plastic, but it’s an FDA-approved piece of plastic that has to bend in the right away and perform its role exactly.

It feels bizarre to stand here not as the patient and not as the doctor but as a sort of accountant. Teirstein goes through five of these $60 plastic tubes in an hour, and three of the $2,000 stents.

You might ask whether the stent needs to cost $2,000. Part of the answer is simply that it’s critical to life. It’s got to live inside a human being, next to the heart. It needs to be precise, and precision is expensive. Getting a new stent approved by the FDA costs millions of dollars. The $2,000 price lets the manufacturer recoup some of that expense.

The Cost Of Being New

There’s another simple answer to why the stents cost so much. Doctors like Teirstein handle new technology, so new that the market hasn’t figured out yet what it should cost.

Harvard economist Ken Rogoff says that some materials you see in hospitals, like bandages, have been around long enough to become ordinary and cheap. “But the kind of fine scalpels used in heart surgery are really pretty new, and there are lots of different varieties,” he says. “The market is still sorting itself out.”

Over time, most products become mass-produced, familiar, and less expensive. Think of Band-Aids, TVs and calculators – they’re all ordinary, and they’re all generally affordable.

We don’t get to know scalpels and stents the way we know calculators. We don’t really understand just how perfect they need to be. And we tend to accept that marginally better medical technologies are worth the cost.

Because we’ll pay for the new, better stent, manufacturers are constantly trying to make a new, better stent. Americans have been incredible innovators in medical technology. We benefit from that. The world benefits from that. We also pay for it. A lot.

A Medical Mystery: Why Health Care Is So Expensive