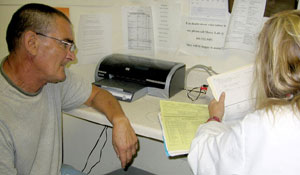 Walter Brooks, a 63-year-old homeless man, is seen by physician assistant Jean Prevas at the Health Care for the Homeless clinic in Baltimore.

Most homeless people in America are too poor to buy their own health coverage, but many also don’t qualify for Medicaid, the government-run health program for the poor.

In 41 states, single adults are not eligible for Medicaid…you can have zero income and still not be eligible for any sort of health insurance.

Medicaid is mainly for people who have children or a disability, and most homeless people are childless adults. So, like 63-year-old Walter Brooks of Baltimore, they make do without insurance coverage.

Brooks, a big, soft-spoken man, has been homeless on and off for the last seven years. What health care he does receive, he gets at a clinic run by the nonprofit group Health Care for the Homeless.

Brooks has high blood pressure, manic depression and a history of strokes, but clinic physician assistant Jean Prevas notes that he hasn’t been in for while.

“I’ve been procrastinating about coming because I didn’t want to get yelled at,” says Brooks. Prevas assures him that won’t happen.

The clinic sees about 200 homeless people each day, at no cost to the clients. Many, like Brooks, have serious health problems and nowhere else to go – except maybe an emergency room.

“In 41 states, single adults are not eligible for Medicaid, and Maryland is one of those states,” says Jeff Singer, president and CEO of Health Care for the Homeless of Maryland. “So you can have zero income and still not be eligible for any sort of health insurance.”

A Cycle Of Health Woes

That’s the case for about 70 percent of the patients that Health Care for the Homeless sees nationwide, according to Singer. The group uses donations and government grants to provide care – but Singer points out that this is not a very cost-effective system.

The homeless population is one in particular need of attention on this issue, says Singer. Many people are homeless because they have health problems that cost them their jobs and eventually their housing – and that sets off a downward spiral that’s expensive and difficult to stop.

A Major Cost, One Way Or The Other

Singer and other advocates have been encouraged by the health care legislation now moving through Congress. The House-passed bill would expand Medicaid coverage to millions of additional low-income adults. The Senate Finance Committee is considering a similar move.

But these measures could be endangered as concerns grow over how to pay for the health care bill: Such a Medicaid expansion is expected to cost more than $430 billion over the next 10 years.

The nation’s governors – who usually bear a share of Medicaid costs – are worried.

“Governors agree that there cannot be an unfunded mandate. It cannot be passed onto the states to pick up the tab,” says Jim Douglas, Vermont’s Republican governor and chairman of the National Governors Association. “We have to make sure that we don’t expand a program that we can’t afford to pay for over the long term.”

Douglas notes that most states are already having trouble meeting their needs because of huge budget deficits. And he says he’s not reassured by proposals in Congress to have the federal government foot the bill to expand Medicaid, but only for the first two years.

The governors’ opposition comes on top of broader discontent over the costs of the health care bills. Lawmakers have been shouted down by angry crowds this summer while trying to defend proposals to extend coverage to the poor.

“A lot of the people who use the emergency rooms are using the emergency rooms because they have no other place to go,” Sen. Ben Cardin, a Maryland Democrat, said at a town hall meeting this month. “They don’t pay their bills, and then the hospital has to raise the rates on all of us.”

Opponents of the legislation say they don’t trust the federal government to run the program efficiently and have vowed to defeat the bill.

Homeless advocates, meanwhile, say they hope the needs of their clients don’t get lost in the larger debate. One way or the other, they say, the public will end up footing the bill for the homeless.

Should The Homeless Be In Medicaid?