This is the second of a two-part report about the search for a more cost-effective health care delivery system. 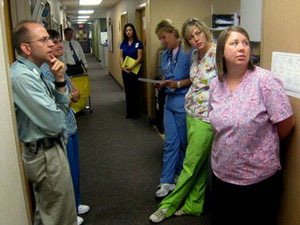 Dr. Dave Yehl (left) meets with nurses and a scheduler for a twice-a-day hallway huddle. Under the experimental payment scheme, the team is taking a more wellness-oriented approach. (David Welna/NPR News)

In the health care debate, many agree that the payment system for doctors and hospitals doesn’t work. They’re paid for each procedure they perform, giving them a perverse incentive to perform more.

Yet that system – known as “fee for service” – is what prevails nationwide, and it is a major driver in rising health care costs. The health care bills before Congress may do little to change that. But on the state level, Minnesota may have found its own way to move doctors off of the fee-for-service treadmill.

Watching health care costs soar has David Tilford increasingly worried. As president and CEO of Medica, Minnesota’s second-biggest health insurer, Tilford fears medical-expense inflation is too much of a burden on employers, who are Medica’s main customers.

Read the first in this two-part report on the search for a more cost-effective health care delivery system:

“Some employers, especially on the smaller end, are dropping coverage altogether, because it’s simply become unaffordable,” Tilford says. “So we had an obligation to do something. We couldn’t simply sit idly by, while our customers were struggling.”

So about a year and a half ago, Tilford met for drinks with Mark Eustis. Up until then, the two men were adversaries – Tilford’s firm, Medica, was paying ever-higher bills on claims from Fairview Health Services, the not-for-profit that Eustis heads. Fairview has seven hospitals and 49 clinics. Eustis says he was tired of trying to defend a broken system and wanted to do something different.

The challenge, Eustis says, is that “if you do something different in today’s reimbursement world, you’ll generate less funds, because we’re in a fee-for-service world that actually pays you to do more. If you really manage utilization appropriately, if you try to reduce costs, be more efficient, more effective, you get paid less.”

So Eustis and Tilford struck a deal. The insurance company agreed to provide an undisclosed amount of money to help Fairview – Minnesota’s second-largest health care provider – move from fee-for-service billing to a system based on fixed payments. Tilford says it was by no means a gift to Fairview.

“I was very clear that we would make investments, and that those investments should produce changes in the way care was delivered,” Tilford says.

Eustis, for his part, says Medica took a carrot-and-stick approach with Fairview: “If we don’t perform, we’re going to get less. If you perform at a higher level, you’ll be able to get additional payment.”

The idea, says Eustis, was to keep patients well – by spending more on them when they’re healthy, with the aim of reducing costly illness.

“It may sound simple, but getting physicians and practitioners to think about that, versus just thinking about people when they’re sick and generating production units, is a huge, huge change,” Eustis says.

Experimenting In ‘The Sandbox’

Fairview’s clinic in Eagan, just south of Minneapolis, resembles most big health clinics. But this facility, with its 10 physicians and 12,000 patients, is known as “the sandbox” – it’s where Fairview began a number of new approaches in patient care this spring.

One of its patients is a 43-year-old father of three who, for fear of losing his job, asks that only his first name, John, be used in this report. Dr. Jamie Gaul sits down with him in the exam room and gives him a physical. John says he ran out of Lipitor, a cholesterol-lowering medication, but that’s not the only reason he has come to the doctor’s office.

John also complains of constant chest pains, which he links to stress he has been feeling due to layoffs at his workplace. Later, Gaul says he has adopted a new approach for identifying such a patient’s concerns. He calls it “motivational interviewing” – essentially, letting the patient do most of the talking during an exam.

“I think if we can catch ourselves, so we don’t jump in with our own agenda too quickly, I think it really does help, and I think that overall, the care ultimately is more effective,” he says.

Were Gaul being paid by the number of patients he sees, as most doctors are, it might not have been worthwhile for him to sit and listen at length to his patient. But Gaul and all the other doctors at the Eagan clinic are now on salaries and feel more at liberty to consult with each other about patients.

Being Responsible For Patient Health

One new goal for Lynn Fiscus, the Eagan clinic’s medical director, is to get more patients to do cancer screenings.

“Under the old model, it didn’t matter whether I did a good job counseling them or talking to them about colon cancer risk. We were all reimbursed the same, just for that face-to-face visit,” Fiscus says. “Under this new model, we’re accountable for how many of our patients are up to date on their colonoscopies, how many have had their mammograms. It’s really a different way of looking at it.”

It’s still too soon to know whether the more collaborative, wellness-oriented approach is more cost-effective at Fairview’s Eagan clinic.

The clinic’s goal this year is to cut costs by 20 percent, while increasing the number of patients by 50 percent. Physician Dave Yehl says he has no idea whether he gets a bonus if that happens.

“This is a faith-based initiative,” he says with a laugh. “We’re kind of taking it on faith that our higher-ups will kind of kick in that incentive once we’ve established that we have good ways of making quality care.”

And if they do, the Medica-Fairview venture could be a model for revamping fee-for-service health care.