Nurse practitioners say efforts to expand primary care to millions of Americans under the health law are hampered by insurance industry practices that limit or exclude their participation.

Despite laws in 17 states and the District of Columbia allowing them to practice independently, nurses with advanced degrees say some insurers still don’t accept them into their credentialed networks as primary care providers, while others restrict them mainly to rural areas. 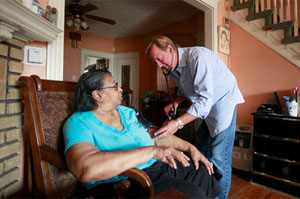 Jerry Driscoll, a nurse practitioner, visits Gwendolyn Slaughter, 85, in Mount Airy. Because he is not directly credentialed, “people can’t find my name or the name of my company” in insurers’ providers lists, he said. (David Swanson/the Philadelphia Inquirer).

After years of fighting doctors in state legislative battles to expand their authority, nurse practitioners are taking a new tack: asking the Obama administration to require insurers to include them in the plans offered to consumers in new online marketplaces, which open for enrollment Oct. 1.

Millions of newly insured consumers will need access to primary care, but “this will not happen if private insurers continue to exclude or restrict advanced practice registered nurses from their provider networks,” said Karen Daley, president of the American Nurses Association (ANA), in a prepared statement.

Nurse advocates want to be able to bill insurers directly for services, which would require them to be credentialed in insurers’ networks. But insurers say a mix of state laws governing nurses’ ability to practice independently complicates such efforts. They say they have taken other steps to expand primary care services, often using nurse practitioners in “medical homes,” where doctors, nurses and other professionals work together to provide care.

“We think the future is in the coordination of team-based care,” said Alissa Fox, senior vice president of the Blue Cross Blue Shield Association. “And nurses are a key part of the team.”

The ANA argues that insurers selling plans in the new marketplaces should be required to credential a minimum number of advanced practice nurses. Under its recommendation, insurers would need to include as few as 20 nurse practitioners in some states and more than 600 in others.

The group submitted its recommendation in July as part of formal comments on proposed health law rules. The Obama administration, in a final rule issued late last month, said it would not make any changes now, but would “continue assessing” whether it should require insurers to contract with specific health care providers.

Clare Krusing, a spokeswoman for America’s Health Insurance Plans, wouldn’t comment directly on the recommendation, but noted the percentage of HMOs that credential nurses is rising, “a reflection that new models of care are being implemented.”

The focus on credentialing is the latest strategy in a long running battle by nurse practitioners, marked mainly by efforts to expand their authority under state law to provide care without direct physician oversight.  In 2010, the Institute of Medicine endorsed such efforts, urging state and federal regulators to remove barriers so nurse practitioners can make full use of their training, which includes instruction on examining, diagnosing and treating patients.

Controversy has continued, however. While proponents say nurse practitioners can perform many of the primary care services that physicians do — and at lower cost — doctor groups say they should do so only as part of doctor-led teams. They also question whether the approach would increase access to primary care.

“Absent that team approach, patients will be at serious risk,” Paul R. Phinney, president of the California Medical Association, said in a statement opposing a bill that would expand nurse autonomy. “In California, where we already have integrated medical teams in many areas, removing nurse practitioners to set up shop elsewhere will only create a new access problem where one does not currently exist.”

Nevada was the latest state to allow nurse practitioners to hang out their own shingles, with Gov. Brian Sandoval signing a bill in June.  Still, in most states, nurse practitioners require collaborative arrangements with physicians for oversight of their diagnoses and treatment, according to a report by researchers at the Center for Studying Health System Change, a nonpartisan research group in Washington.

While each state has its own licensing and certification criteria, advanced practice nurses generally can diagnose and manage common illnesses such as strep throat, order tests and give patients prescriptions for medications. Those specially certified can administer anesthesia.

Such laws generally do not specify exactly what tasks nurse practitioners can perform, but “authorize a broad range of practice and spell out whether or not physician supervision is required to carry out tasks,” the report says.

With up to 30 million Americans expected to gain coverage through private insurance and Medicaid in the next decade, a projected shortage of primary care physicians is leading to questions about who will care for all the new patients. Because nurse practitioners undergo a shorter training time — a master’s degree program after becoming an RN, plus up to 700 hours of supervised clinical experience — their numbers can be increased more quickly than physicians.

More nurse practitioners would go into business for themselves if insurers included them in their networks and they could bill directly, said Deanna Tolman, an advanced practice nurse who opened her own office several years ago in Aurora, a suburb of Denver.

“We’re in this gray area: Insurers are fine with us providing care as long as we’re working for physicians. But some of us don’t want to work for physicians,” said Tolman.

Jerry Driscoll, a Philadelphia-area nurse practitioner, for instance, runs an agency that delivers primary care to 1,000 patients in their homes. But since he is not credentialed by several of the state’s major insurers, his company must bill through physicians with whom he has collaborative agreements. In addition, “people can’t find my name or the name of my company” in insurers’ providers’ lists, he said.

Physician concerns are also part of the mix.

“There are longstanding debates between physicians and nurse practitioners about the clinical roles of each,” said Alwyn Cassil, a spokeswoman for the Center for Studying Health System Change. “Aside from those clinical issues, there isn’t any denying there are economic issues on the table as well that revolve around nurse practitioners being able to bill independently of physicians.”

Nurse practitioners say some insurers sign them up no matter where their offices are located, while others do so only in rural areas and places where primary care physicians are in short supply.

In Massachusetts, which in 2006 became the first state to require residents to have insurance, demand for medical care rose after the law’s passage. Responding to that, Massachusetts lawmakers required insurers to recognize nurse practitioners as primary care providers, among other changes.

But insurers “can still write a policy that makes it difficult,” said Nancy O’Rourke, a regional director for the American Association of Nurse Practitioners. Even though the number of nurse practitioners in the state has grown by a few hundred to about 6,000 since the law’s passage, the state’s major insurers have  credentialed very few, she said.

Blue Cross Blue Shield of Massachusetts said it has about 3,200 nurse practitioners in its network, but fewer than 100 are credentialed as primary care providers.

About 74 percent of 258 large HMOs nationwide said they credential nurse practitioners as primary care providers, according to a 2012 study by the national Nursing Centers Consortium, which advocates for independent practice nursing.  That was an increase from 53 percent of those surveyed in 2007. While the sample included HMOS with the largest enrollment in each state, it didn’t include all HMOs or other forms of insurance policies, such as preferred provider organizations (PPOs).

Nurse advocates are encouraged, but not satisfied.

“We’ve made progress, but we’re not there,” said Tay Kopanos, vice president for state policy at the American Association of Nurse Practitioners.